Indian Americans can be funny too 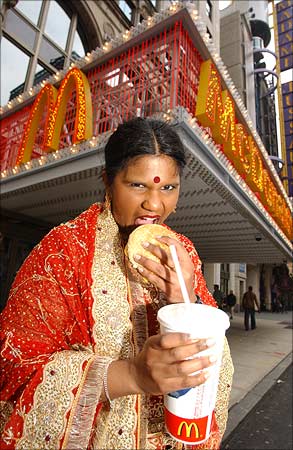 Indian Americans are known for a great many things -- business acumen, success in the medical profession, being the backbone of Silicon Valley. But humour? Do funny desis really exist? Isn't Russell Peters -- the Anglo-Indian stand-up comic from Ontario -- the only one? No, he isn't.

In a series of portraits over the coming week, rediff.com introduces you to the funny men and women who comprise the funny bone of the Indian-American community. We kick things off with a look at Vijai Nathan.

In one of her earlier performances doing stand-up comedy, Vijai Nathan was at a South Asian wedding. Thirty minutes of joke-telling, and no one stirred. "I felt I was giving a speech," says Nathan, who has since appeared on ABC News' 20/20, The Oxygen Network and the BBC. What made matters worse was her parents were sitting in one of the front rows, offering looks of sympathy.

To her surprise, as soon as the performance was over, the room erupted with applause. Nathan later discovered people were silent because they didn't want to interrupt her.

Nathan, who has been doing stand-up since 1997, has since got a finger on the pulse of the audience. When she doesn't draw too many laughs, she knows there could be many reasons. It could be the crowd is a quiet one; it could be the lighting; or the comedian may have crossed a line he or she shouldn't have. Or the crowds -- like the one at the wedding -- may never have seen a stand-up comic before and don't know how to react.

Growing up in Maryland, Nathan began her career as a journalist. After a year at Newsday, New York, and two years at The Baltimore Sun, she took a class in stand-up comedy at The Learning Annex (little boxes on the pavement in many American cities that offer seminars on everything from wine tasting to flirting), and loved it so much that, within four months, she was ready to quit her job.

In stand-up comedy, she found her voice. "My family came to America in 1970, and though I was born here, we were pretty much foreigners in our community," she says. She wasn't encouraged to speak her mind or talk back if someone made a racist remark. "I wanted to be able to get back at them," she says. There was a creative streak in her family anyway; her grandfather was a poet.

It wasn't easy to break in, being South Asian first, then a woman. One of her first performances was in a steakhouse in West Virginia where she was the only coloured person present. No one knew who an Indian was. Someone liked her jokes and hollered: 'Keep it going for the Cherokee (a native American tribe).'

For her material, Nathan draws inspiration from her family -- two sisters, a doctor and a lawyer; her mother; and her father who passed away recently and who was a pillar of strength. In the beginning, when things weren't going too smooth, she says, he encouraged her to do everything possible to be the best in the field. "He said, maybe you can get a master's in stand-up comedy," Nathan laughs.

In addition to bringing out issues that have touched her, such as racism and the general attitude toward immigrants, she explores topics like dating and sex that are usually brushed under the carpet in the desi community. "People are like: Oh my god, I can't believe you said that," she says.

Her grandfather was Namakkal Kavignar Ramalingam Pillai, a freedom fighter and Gandhian poet in Tamil Nadu. "He fought against the tyranny of the British to make India's voice heard," Nathan says. "And I use comedy to fight racism in America."

She was in a fix when her mother asked her to perform at the Hindu temple she attended. "I was used to mainstream comedy clubs in New York," she says. "It was the first time I had to do a clean performance." She wrote down jokes that could appeal to an audience that would include a four-year-old as well as someone who was 75. The show was a success.

Among her audience are South Asian families, mainstream college students, and patrons of comedy clubs that are open to all. She also raises funds for non-profit organisations like Asha for Education and others that work with survivors of domestic violence. She has toured the country with her one-woman show, Good Girls Don't But Indian Girls Do, about balancing the Indian and American worlds.

It was a moment of satisfaction for Nathan when she went back to Virginia for the first time to perform at a sold-out show. "For my parents to see me in my hometown, making it big, was exciting," she says. She also felt gratified when someone told her it was the first time during her show his mom had laughed since his father's death. "And there are some people who've said: I'm glad you're not a computer programmer."

On Hinduism: My mom loves McDonald's. So I asked, 'Mom how can you be a good Hindu and still eat Big Macs?' She said, 'Vijai, the cow is sacred. The bull is not -- McDonald's is 100 percent bull.'

On terrorism: George Bush says, 'No racial profiling, unless you look like a terrorist.' That means every brown person with a mustache would be detained. That is half of my family. And I'm just talking about my aunts.