From Bathinda, with love 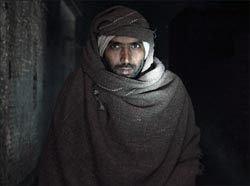 "I want to make intelligent Punjabi cinema," says debutant director Gurvinder Singh, and proves it with Anhey Ghorhey Da Daan.
On a cold morning in Bathinda, Punjab, an old man wakes up to make tea.

He moves silently to light the fire and boil the water. His daughter wakes and finishes the task with greater deftness. His son and wife wake grudgingly. A few minutes later, Mal Singh -- played by Mal Singh, a local, like most of the actors in this film -- is summoned to a village council.

Unknowingly, he is thrust to the forefront of a noisy villagers' protest against a landlord who demolished a house overnight and sold the land on which it stood to an industrialist.

The opening scene of debutant director Gurvinder Singh's Anhey Ghorhey Da Daan (Alms for the Blind Horse), based on the eponymous novel by Gurdial Singh, is as perplexing as it is disturbing.
The film opens on the night of a lunar eclipse with a man asking for alms. The title is derived from a tradition followed in parts of Punjab wherein members of 'lower' castes ask for alms during an eclipse, in the name of a blind horse. Mal Singh, his wife (Dharminder Kaur) and daughter Dayalo (Sarbjeet Kaur) are waiting for news of the elder son Melu (a pitch-perfect Samuel John), whose escape to a city has not brought him peace.
Singh, an alumnus of the Film and Television Institute of India, has dedicated his film to his mentor, the late Mani Kaul. And he chose to make it in Punjabi. "Why should I make a Hindi film when my mother tongue is Punjabi?" he snaps. Then he swears that he will never make a Hindi film. "I just want to make intelligent Punjabi cinema."
His film has made a mark. It got the Special Jury Award and the Black Pearl Trophy at the 5th Abu Dhabi Film Festival  in 2011. It was screened at the Museum of Modern Art in New York this year. It also won National Awards for Best Direction, Cinematography and Best Feature Film in Punjabi at the 59th National Film Awards.
It has now found a theatrical release in multiplexes through the PVR Director's Rare banner.
The film was made with Rs 2 crore from the National Film Development Corporation and shot in a village near Bathinda. It took Singh about one year.
At 113 minutes, the film proceeds at a quiet pace. The dialogue is minimal and the cinematography stark. The focus is the villagers.
Its future mired in uncertainty, Mal Singh's family tries, and fails, to find meaning in daily chores. In the nearby town, injured and alienated, Melu struggles to make sense of a strike by the rickshaw-pullers' union. His crisis is further intensified by his inability to do anything.
The action is sparse and Singh's bitter portrayal of poverty, helplessness and subjugation is impressive. "I hope the film will mark a new beginning for me, and for the kind of cinema I want to make," says the director.
Priyanka Sharma
Source: