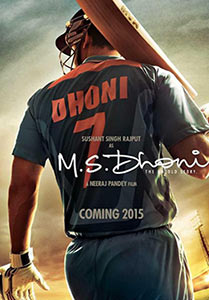 A look at the Top 10 tweets from your favourite Bollywood celebrities:

After Bhaag Milkha Bhaag and Mary Kom, get ready for yet another biopic on a sports person.

The first look of M S Dhoni is out, and Sushant Singh Rajput will play the celebrated cricketer.

Directed by Neeraj Pandey, the biopic will release next year.

The auspicious festival begins today and Amitabh Bachchan took to Twitter to wish his fans.

'Happy Navratri .. the shraad period is over and now time to celebrate 9 days of gaiety and dance,' Bachchan tweeted.

Sunny takes a break from Mastizaade

Sunny Leone has wrapped up the first shooting schedule of her upcoming film Mastizaade.

Director Milzap Zaveri praised the actress and wrote: 'Today @SunnyLeone finished the 1st schedule of #Mastizaade and she made every moment special, fun, gorgeous and memorable! She is AMAZING!!'

The film will also star Vir Das and Tusshar Kapoor.

Akshay Kumar, who recently finished shooting for Baby in Dubai, returned to Mumbai for his daughter's birthday.

'My favourite bald man @AnupamPkher and me on the plane rushing from the sandy desert in Abu Dhabi where the secrets of #Baby have been unravelled to our homes in Bombay so I can celebrate my daughter's 2nd Birthday with my family & friends and enjoy these precious moments of fatherhood. I wish my baby girl so much love & happiness, I don't know how to love more than this. The tired smile on my face shows how much I just want to get home right now,' Kumar wrote.

Working birthday for A R Murugadoss

Filmmaker A R Murugadoss, who is currently working on his Tamil film Kaththi, celebrated his 36th birthday on the sets.

Sonakshi Sinha wished him and wrote: 'Happy birthday to @ARMurugadoss sir, who i am sure is not taking a HOLIDAY even today - this director is never off duty.'

A 20-year-old man was mauled to death by a white Bengal tiger at a Delhi zoo, and Ranveena Tandon feels there should no zoos.

'With the whole tiger incident at Delhi zoos, brings to light that there should not be zoos, animals were born free, instead of spending money. Spending money on zoos and upkeep, spend that money against poaching and saving our forests and wildlife, preserving our environment,' Tandon wrote.

Sonu Nigam wished her: 'Happy birthday to one of the finest human beings I know. Besides being 1 of the finest actresses we have.'

Divya will be next seen in Rajesh Pillai's Traffic, which is a remake of a Malayalam film by the same name.

Salman Khan took to Twitter to wish his London Dreams co-star Ranvijay Singh for his latest film 3 AM.

'Remembering London dreams with the roadies rockstar @rannvijaysingha. Watch out for movie #3AM in cinemas tomorrow,' he tweeted.

She further wrote 'My naughty producer @KuunalGoomer n my hottie hero saahil shroff at shoot today' and added another picture.

Rhea Kapoor posted a picture by a fan, who is in love with Khubsoorat