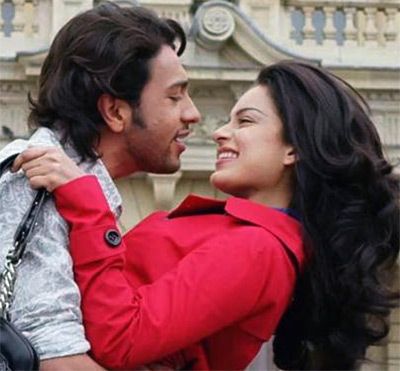 Ever since his explosive interview which came out on the morning of April 28, Adhyayan Suman has been inundated by calls and messages.

"Most of them congratulated me for speaking out. Some, however, saw me as a publicity seeker. Let them," he says.

"It doesn’t bother me. I said what I had to say because another human being was going through pain that he did not invite himself," says Adhyayan referring to Hrithik Roshan.

Adhyayan gives Hrithik a clean chit, and reveals Kangana was besotted by him from the time they worked in 2010's Kites together.

"Even before my relationship with Kangana, I was aware of her infatuation with Hrithik Roshan because his mother (Pinky Roshan) is my mother’s friend," he says.

Adhyayan talks of Kangana’s growing infatuation for Hrithik while they were shooting in Las Vegas for Kites.

"She was giving him way more attention than healthy or warranted. As her boyfriend, it made me uncomfortable, " says Adhyayan.

Then on Valentine’s Day while uploading telephone numbers on the new cellphone that he had gifted Kangana, Adhyayan discovered 'at least 70' messages from Kangana To Hrithik.

Adhyayan feels it is important for people to know that it is not just women who suffer in abusive relationships. Men can be at the receiving end too.

He recalls a party at Hrithik Roshan’s residence where Kangana accused an actor of grabbing her posterior. On the way down four flights of stairs, Adhyayan was abused.

"She slapped me hard because according to her, I didn’t grab the actor who had grabbed her a**. Imagine me, a newcomer, creating a scene! For not doing so, I was slapped. I was stunned and teary-eyed with all the guests and media persons going up and down. It was humiliating and hurtful," he says.

"I went through such abuse many times over. Not just me, my father was also abused repeatedly. I want people to know that men often suffer abuse in a relationship but their pain is not taken seriously."

Adhyayan says he rang up Aditya Pancholi, who was rumoured to be in a relationship with Kangana when she arrived in Mumbai.

"I rang him up this week and apologised for not listening to him when he had warned me against her. If only I had listened to him. But I was under her spell. Now having spoken about it, I’ve finally exorcized all the demons of the murky relationship," sighs Adhyayan.

For those who feel he is doing this for publicity, Adhyayan has only a shrug of indifference to offer. "Let them think what they want. Only I know what my parents and I went through. My career was destroyed. I am ready for a second innings. In fact, I am all set to direct and act in a film that will be shot extensively in the US. But this is not the time to talk about that."