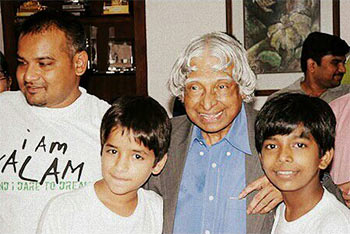 'I tried to think of a hero, who can inspire. I felt the most inspiring living hero for our children is Dr Kalam. He was a true leader, a true hero.'

Nila Madhab Panda tells us why he made I Am Kalam.

National award-winning director Nila Madhab Panda (extreme left, in the picture) mourned with the nation, when former president APJ Abdul Kalam passed away into the ages. His film I Am Kalam was a homage to Kalam's vision of a child-literate India.

Panda had met the great visionary on several occasions for the film, and he recalls them with much affection.

"I came from a similar background as Dr Kalam, where basic education and survival were an issue," Panda says. "When I became a filmmaker, I made a feature length documentary for James Bond co-producer Barbara Broccoli. I met a lot of street children for the documentary. What haunted me most were their dreams. I had seen the dreams in the tiny eyes of those children, whom I met on the streets, railway stations, brick factories and brothels. They all had dreams, like Dr Kalam and me."

This is when Panda began planning his film on Kalam.

"I used to read a lot on Dr Kalam. I always thought of making a film that can inspire children. I tried to think of a hero, who can inspire. I felt the most inspiring living hero for our children is Dr Kalam. He was a true leader, a true hero," says Panda.

Remembering his first meeting with Dr Kalam, Panda gets emotional. "The first  thing he said to me was, 'Come come, you have a great smile, it means you have a good soul.'

"He held my hand and asked me, 'Are you married?’ I said yes.

"Then he asked, ‘Are you with family after marriage or separated from family?' I said my family lives in the village but I am in the city because of my profession.

Panda claims he met Dr Kalam for a number of times after he made the film.

"Apart from being a president or scientist, Dr Kalam’s understanding of modern India and its culture heritage was unmatched by any other living leader. He was a true superhero, a star which you can’t touch but you can feel in every sphere of activity."

Panda's I Am Kalam will remain a cinematic legacy of the great man's reach and influence.

"I made a film on his philosophy and his statements, and it became a superhit. He was not into self-congratulation, so instead of talking about himself after my film, he said, 'Good, you are spreading a good message for the new generation.’ He never praised himself. In our generation, we never met Mahatma Gandhi, Lal Bahadur Shastri or Jawaharlal  Nehru but we are lucky and proud to have had such a great living legend in a our midst. Dr Kalam is a true hero of modern India."