'If one is saying the Modi government makes me feel insecure or will put me in jail if I say anything against him, do not worry, as he won't do any such thing.' "Why should there be any fear or doubt in one's heart? The sad part is that Pakistanis get a handle and Imran Khan makes some statement. After Naseerbhai (Naseeruddin Shah) said something, the Congress people took the benefit of it," Rawal, the Bharatiya Janata Party MP from Ahmedabad, tells Rediff.com Contributor Ramesh S.

Have you met NSA Doval?

I have met him three-four times at the PMO, but I have known about him.

I have read about him, watched several clippings and also listened to his lectures.

He is a brilliant and gutsy man.

Ajit sir, with the others, planned each and everything about the surgical strike, where Modiji (Prime Minister Narendra Damodardas Modi) was leading the team.

Our Indian Army was planning to do such actions from a long time. In fact, they were planning to do it after 26/11 itself, but the government of that time did not gave the required consent. I still don't know why.

If this had happened then, we wouldn't have faced the Uri attack.

However, the political consent was there this time and the Indian Army succeeded in its mission of counter-attack with the surgical strike.

Do you think the Opposition parties will get a good answer from this film?

Yes, definitely! They have already got a hard-hitting answer.

It is believed that films like Uri, The Accidental Prime Minister and Thackeray are being released in time for the elections.

In a country like India, elections are always taking place in some state or the other.

That doesn't mean we should not make any films considering that. 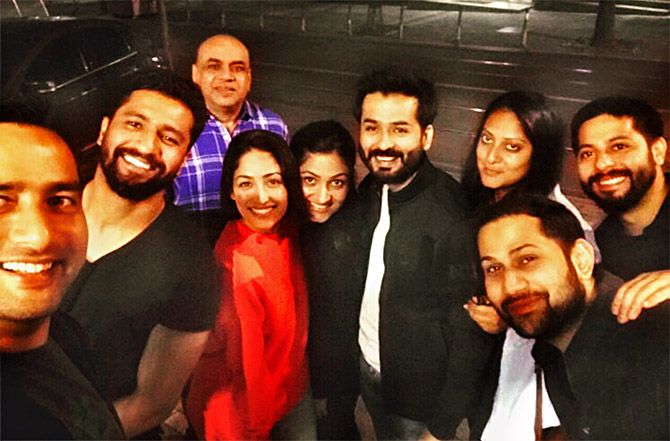 Political parties are often seen interfering in film business by protesting and halting film releases. What is your take on that?

Yes, but it is bound to happen because everyone wants something or the other.

They carry out such things just to gain importance and make people realise that their parties are still alive.

There are no other intentions.

Everyone is aware of that.

What do you say to criticism the Indian Army gets on social media platforms?

No matter what you do, you will always be criticised by some people.

They find fault and error in almost every little thing.

When Modiji went to Pakistan and met Nawaz Sharif on his birthday, some said the Indian PM went to have cake with them.

They don't understand that if Modi sir is going somewhere, he is obviously going there to maintain and strengthen the connections between the countries and not to eat cake.

Anything could have happened in Pakistan, but he still went with trust for the betterment of both countries.

Benazir Bhutto was shot to death in the midst of a rally there in 2007.

Modiji went there without much protection just to build relations between the countries.

What can be a bigger statement than this that he wants peace, friendship and nothing beyond that?

And these people on social media are criticising by saying Modiji went to Pakistan to have cake!

They are also saying terrorist and war attacks in our country haven't stopped even after Modiji went to Pakistan. They should understand that these attacks are going on since 1947 and Pakistan is a country which will not improve by eating just one cake.

One should not give any importance to the views and opinions given by such people on any medium.

Nowadays, the media or any celebrity has to be careful about expressing opinion on our present government. What is your take on that?

I don't think that is true.

Modiji is ruling the government today; he ruled Gujarat for 14 years as chief minister.

At that time, the media was criticising him relentlessly. Still, Modiji did not take any action against any media person or close down any newspaper.

In fact, he said if he is one of the reasons for their revenue, he would be happier than anyone else.

In such country, if one is saying the Modi government makes me feel insecure or will put me in jail if I say anything against him, do not worry, as he won't do any such thing.

If you have spoken anything about him, it is proof that you have your right of freedom of expression.

You are living in this country after saying it, which means you are safe here.

No reaction has been filed against you, which means no violent crime is happening to you.

So why should there be any fear or doubt in one's heart?

The sad part is that Pakistanis get a handle and Imran Khan makes some statement.

After Naseerbhai (Naseeruddin Shah) said something, the Congress people took the benefit of it.

I believe all this is nothing, but a circus.

Also, everything is being copied from other countries. For instance, the award-waapsi was started in America during the Vietnam War. The Candle March was started after the death of Lady Diana.

We should not pay attention to all this.

What did you learn about the Uri attack while shooting for the film?

I learnt that the planning and preparation done by our army people was simply amazing.

Modiji wanted our soldiers to return safely from the counter-attack, whether the mission was successful or not.

This is a highly sensitive issue.

It is very heart-wrenching for someone who has gone through it.

Sometimes, people don't have the courage to come out and speak as everybody has to live in this society.

Later, when you see other people speaking out, you also have the courage to act on it.

But I would suggest to those people not to voice out in social media; they should go to the police station.

I believe, as soon as you go on social media, your credibility decreases.

People might think that this person doesn't need justice, but needs publicity or revenge.

Justice will be only given by the police and the law.

Social media is not the right place.