Sanju is a repeat of Munnabhai, feels Syed Firdaus Ashraf. 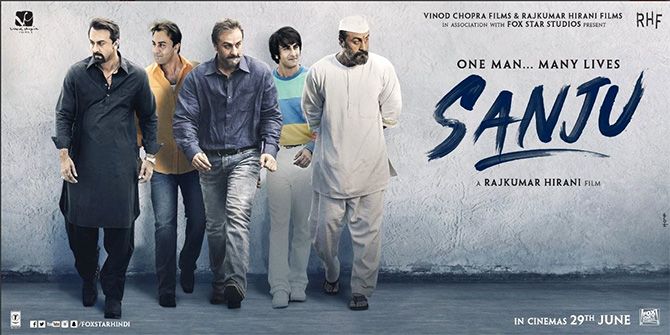 I have seen Sanjay Dutt walk in and out of prison several times.

But even during the most tension-filled times in his life, you couldn't miss his swagger or swag.

I got to interview him once, during which I asked Dutt which Bollywood actor reminded him of his youth.

After a pause, he took a drag on his cigarette, and exhaled, "Of course, I was too wild in my younger days; Ranbir comes nowhere close to me."

It is impossible to define Sanjay Dutt in one line, for he has been it all: Bollywood's bad boy, accused of being a terrorist with links to gangsters, a heart-stealer, a drug addict, the son of Bollywood royalty (Nargis and Sunil Dutt), the loveable Munnabhai...

The teaser of the film on his life, Sanju, starring Ranbir, can't capture the many facets of this complex human being, and I think it ends up making a caricature of the man I know as Sanjay Dutt.

Director Raju Hirani hasn't given up his Munnabhai hang-up and tries to fit his new hero Ranbir in the Munnabhai mould.

Despite his boarding school upbringing, Dutt is given to crass and crude language.

Ranbir, alas!, doesn't look as wild as Dutt did in his youth. He is too sophisticated and in trying to imitate Dutt, he fails miserably.

The trailer makes you laugh for no reason.

The first scene in the teaser, when Ranbir's Dutt steps out of prison, he puts you off because the last thing one would expect from a person coming out of jail is comedy.

His second look, at age 22, and holding a guitar, is comedy.

His third look in the gymnasium is comedy.

His scene entering a chartered plane is comedy.

He gets sarcastic in jail, and returns to comedy in handcuffs.

He gets a tad serious when he holds an AK-56, rifle but returns to comedy.

Kundan Shah once said a film-maker makes only one film in his life and the rest of his movies are a repetition of that first story.

Raju Hirani has done the same.

Sanju is a repetition of Munnabhai.

And that's a disappointment. 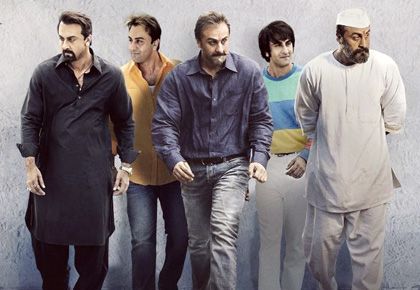