Dhanush: Your partner should be your best friend 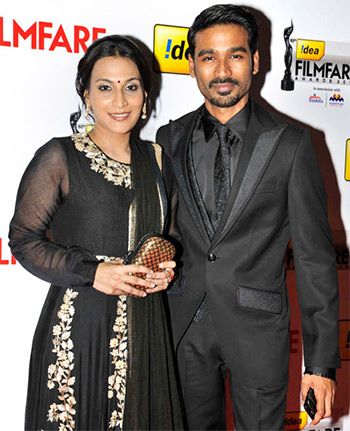 'Aishwarya is my biggest strength, critic and top it all, a great mother.'

Everyone has their set of close friends.

On Friendship Day, we decided to ask Tamil star Dhanush who his best friend is.

"My wife, Aishwarya. I can share anything with her," he says instantly.

"She is my biggest strength, critic and top it all, a great mother. She sacrificed her career to take care of our kids," he adds.

Aishwarya started her career in 2003 as a playback singer in the film Whistle; she sang the song Natpae Natpae.

"I asked her to pursue her career and that I would take care of the kids but she said no," he says, adding, "What she has done is truly commendable. I believe your partner should be your best friend."

In 2012, Aishwarya turned director with the film 3, where had the popular song Kolaveri D.

Aishwarya is currently working on Mariyappan, a film based on the true story of a 21-year-old high jumper from the Salem district of Tamil Nadu.

Dhanush, meanwhile, is promoting his new film VIP 2 with Kajol.