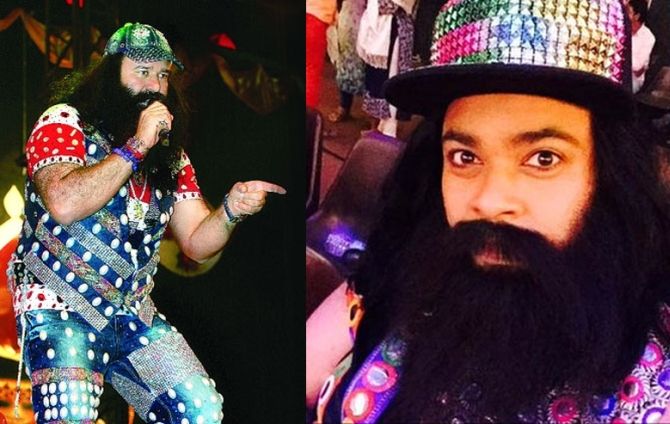 Kiku Sharda has been arrested on charges of hurting the religious sentiments of the followers of the Dera Sacha Sauda chief, often called 'The Guru of Bling' because of his bejewelled costumes and flashy appearances on motorcycles.

Dera followers had alleged that Sharda had hurt their religious sentiments in an episode of the television show Comedy Nights With Kapil aired on December 27.

Sharda was booked on Tuesday under section 295 A of the Indian Penal Code (outraging religious feelings of any class by insulting its religion or religious belief), police said. He has been sent to 14-day judicial custody.

However, according to a media report, Kiku has called it unintentional and just a coincidence.

He was quoted saying in the report that he has immense respect for Gurmeet Ram Rahim Singh and it wasn't his intention to hurt people's sentiments.

He further stated that it was just a coincidence that his attire on the show matched (Gurmeet Ram Rahim Singhji's look) and it wasn't a planned spoof.

"It is a coincidence, and it is unfortunate. I am sorry that people felt hurt. We never try to do any such thing intentionally, or try to get headlines out of it, or want people to talk about our show in this manner. There is nothing more to it," he added.

Sharda was arrested in Mumbai by the Haryana Police.

A case was registered on the complaint of one Uday Singh, the follower of Dera Sacha Sauda, the Haryana police said. While talking to media after his arrest, Kiku apologised and said that he was an artist and "presented the programme on the directions of the channel and programme producers".

"I was given a dress, script to read and directed to act," he said, adding that he had been booked in this case but no action was taken against others, including the TV channel.