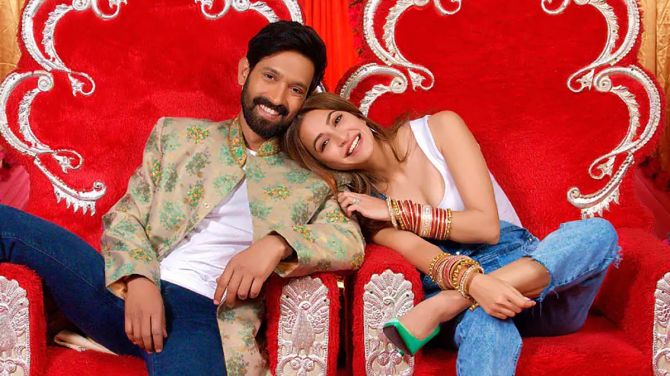 Missed the wedding season during the pandemic?

Well, Vikrant Massey and Kriti Kharbanda bring it to you on your screens, not once but twice over!

Their new film 14 Phere promises to bring the laughs when it releases on July 23.

We just saw Vikrant as a newlywed in Haseen Dilruba, but the new film will see him in a totally different avatar.

Joginder Tuteja looks back at Bollywood's wedding movies to see how well they have done in the past. Tanu Weds Manu really won hearts, when R Madhavan and Kangana Ranaut discovered their love for each other. Of course, marriage is never as easy as it seems so Director Aanand L Rai made a sequel to his hit film.

The marital couple broke up, and Kangana played a double role, giving the film an interesting love triangle.

But the most fun element in both films was Jimmy Sheirgill, who ended up losing Kangana twice over. Vivah was a sleeper hit in 2006 and has spawned endless memes on Amrita Rao offering 'jal' to Shahid Kapoor. What happens when you fall in love with your brother's 'dulhan'?

When Director Onir tried that with Sorry Bhai, it didn't quite work out at the box office. A 'runaway' bride, who was a con-woman, Sonam Kapoor was the central protagonist of Dolly Ki Doli.

The film saw multiple weddings as Pulkit Samrat, Rajkummar Rao and Varun Sharma were taken for a ride in this Abhishek Dogra directed film. One of the most authentic wedding films to release in recent times, Band Baaja Baaraat had Anushka Sharma and Ranveer Singh play wedding organisers.

The music was also a hit. Though the core plot was centered on Kareena whose wedding is being planned, the Shashanka Ghosh directorial was more about female bonding. This one saw her in love with Rajkummar Rao, only to leave him at the altar.

What followed next was drama and revenge.

The film did okay in theatres, but was a hit on satellite and OTT circuits. 7 1/2 Phere released on the same day as well-made films like Seher and Yahaan, but unfortunately, all of them flopped.

Starring Irrfan Khan and Juhi Chawla, the film was about secret cameras filming a wedding in an Indian household. Mira Nair's Monsoon Wedding came at a time when crossover films were just beginning to get into vogue.

Set as a big fat Indian wedding in a Punjabi household at Delhi, the film packed in a lot of elements with its ensemble cast of Naseeruddin Shah, Lillete Dubey, Shefali Shah, Vasundhara Das, Vijay Raaz, Tillotama Shome, Rajat Kapoor and Randeep Hooda.

While there were several light-hearted moments in the film, a lot of skeletons tumbled out of the closet too.