Will Gran Torino get Clint Eastwood an Oscar?

'What you lookin' at, old man?' he says in a menacing voice.

Kowalski doesn't really raise his gruff voice but there is a quiet menace when he speaks. 'Ever notice how you come across somebody once in a while you shouldn't have (expletive) with?' he says. 'That's me.'

Kowalski is Clint Eastwood, and the film, Gran Torino, which he produced and directed (apart from composing the music), is emerging as a successful 2008 release, and even expected to be nominated for a few Oscars. It was playing in about 80 theatres in North America last week, and can spread to 1,500 on Friday. The trade publication Variety says the film may become  the most successful film of Eastwood's career.

This will be a second triumph in a year for 78-year-old Eastwood who also directed Changeling, a Los Angeles-set drama that garnered good reviews and is headed for a $100 million run worldwide. It focuses on a young mother (Angelina Jolie), who is looking for her lost child and refuses to accept the baby the corrupt police force hands over to her.

A Korean war veteran and a retired autoworker, Kowalski is full of bitterness and racism. Imagine his frustration and anger when his new neighbours in Detroit are Hmong, refugees from Laos. Some of them have turned to gangs to run away from their bleak economic situation in America. For Kowalski who does not seem to be capable of differentiating the Koreans from the Hmong,  it all looks like a big Korean invasion.

A recent widower, who relishes fighting with everyone -- be it his family or the kind parish priest -- Kowalski sits on his porch for most of the day with a silent rage killing his soul. He spends a few hours a week working on his prized 1972 Gran Torino, a car he helped assemble at Ford.

When Thao, a young Hmong, is pushed by a gang to steal the Gran Torino, Kowalski catches him in the act and even contemplates shooting him. But Thao's sister Sue apologises for him, and says that Thao can do odd jobs for Kowalski as a way of atonement. The offer is grudgingly accepted and slowly we see a bond between the family and Kowalski begin.

The change in Kowalski is slow, and though it is predictable, the director in Eastwood makes sure that it does not become too sentimental and over dramatic.

Eastwood, whose career took off in the 1970s thanks to the Dirty Harry movies, may seem to be reliving that role in the beginning of the film. He makes Kowalski a tough character ready to avenge the wrong.

Eastwood has said in interviews that he made Kowalski a nasty person because he wanted to make the change quietly dramatic. When the widower is ranting against the world and condemns other cultures and their customs, the director effectively shows the contradictions raging within Kowalski. 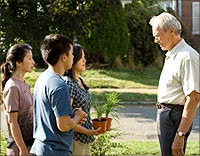 His film triumphs on many levels. He has said this could be his last film as an actor, and he wanted to offer the role to several older artists but they were either retiring (like Gene Hackman, who won a supporting actor Oscar for Eastwood's Unforgiven in 1992) or not available.

While Eastwood gives a towering but an underplayed performance in Gran Torino, his generosity towards other artists makes the film even more effective. He used nonprofessional actors -- many of whom did not speak English or had little command over it  -- to play the Hmong characters. Outstanding among them are Bee Vang (Thao) and Ahney Her, his sister.

Eastwood has been an actor for more than five decades, a star for nearly four, and a director since 1971. He has prospered in his career as an actor and director -- there could be just a handful of filmmakers who are in their late 60 and 70s that are as active as Eastwood. He won the best director Oscar at 52  for Unforgiven and at 74 for Million Dollar Baby.

He has never won an Oscar for acting. Gran Torino may at least give him a nomination for his performance.