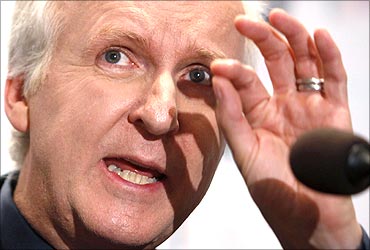 The world's biggest filmmaker, James Cameron, has offered his fleet of private submarines to BP (formerly British Petroleum), to assist the company in stopping the massive oil flow threatening the Gulf of Mexico, caused by its leaking oil rig, the Deepwater Horizon.

According to an article in The Telegraph, the director behind mega-blockbusters Titanic and Avatar is willing to lend BP the privately-owned vessels, which he's owned since filming Titantic more than a decade ago, to help the company's below-sea repair efforts in the Gulf.

Thanks to his runaway box office success with the Terminator series, Titanic and Avatar, Cameron is a billionaire.

The only problem with his plan -- which sounds like a plot line from one of his action films -- is that the vessels are currently in Lake Baikal, Siberia, in the former USSR, many thousands of miles away from the accident site.

A Guardian report said that BP described Cameron's offer as generous, but added that it was working with ExxonMobil, Chevron and various US agencies, as part of an overall rescue effort that numbers 5,500 vessels and numerous planes.

While BP is currently using 12 remotely operated submarines to carry out its repair work underseas, it said it would contact the US Department of Defence if it needed manned submarines.

Image: James Cameron answers a reporter's question during a news conference after he delivered a keynote address titled "Renaissance now in imagination and technology" at the Seoul Digital Forum 2010 on May 13. Photograph: Jo Yong-Hak/Reuters