Last updated on: December 31, 2007 18:04 IST
With 2008 just around the corner, we decided to get together an interesting bunch of people to chat about cinema in the year gone by.

It was an interesting, insightful chat with Rediff readers pitching in, and brought about some debate -- not just on best films and performances of the year, but on issues like plagiarism.

Here's the transcript from Thursday's chat, in case you missed the action:

Amol asked, Raja Sen, Your reviews cannot be digested by many viewers. There are people who have liked sawariya, aaja naachle among others. Your comments plz.
Bolly Woods answers,  Amol, while waiting for Raja, was browsing the comments and found this. Noticed also a lot of people on here who DID NOT like Saawariya -- so my question is this: In a world where you cannot get everyone, or even the majority, to agree whether Hinduism/Christianity/Islam/Sikhism/Buddhism or even atheism is the true religion, how can you expect a reviewer to write something *everyone* agrees with?
ytg asked, ye suparna kaun hai bhai
Bolly Woods answers, Here is your answer:
http://www.imdb.com/name/nm1242455/
Suparn Verma says, Hi everyone, been a great and exciting year ending with the superlative TZP, wonder what's in store for us next year.
Raja Sen says, Hi readers, great to see you all. And you too, Bolly. Let's talk about 2007, the year in movies!
ashish asked, i loved da movie RGV ki AAG??? did u
Raja Sen answers, :) please tell me why, Ramu would LOVE to meet you.
Leena asked, I think OSO & JWM were gudd...while OSO was entertainin, ..JWM was catchy & somewhat reality best....both of thier songs are equally gud...
Raja Sen answers, true, they were both fine fun films. completely enjoyable and pretty honest for the mainstream.
anian asked, Why do critics fail to understand the inner meanings of deeply emotional movies? No smoking was beautiful and heart-warming. But critics missed the pint and they misguided the viewers. That movie bombed only because of critics
Suparn Verma answers, No movie bombs because a critic likes it or not. Good or bad word of mouth publicity is done by the public at large and that is what drives any movies collections after the first three days 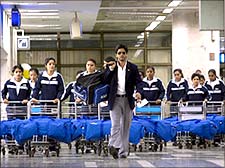 wildpixie asked, Sen, Jab We Met, Johnny Gaddar and Loins of Punjab were rewarding experiences. Do these feature in your end-of year movies list?
Raja Sen answers, yes, you'll see each and every one of the three. I'm glad these films have found such widespread appreciation. which of them did you like best?
UTPAL asked, THIS YEAR AKSHAY KUMAR HAVE FOUR HITS. SO, WHY HE SHOULD NOT WON AN AWARDS OF BEST ACTOR?
Suparn Verma answers, Maybe he will:) However the awards this year will be SRK = Chak De, Kareena = Jab We Met, Best Director = Aamir Khan, Best Film = Chak De and TZP (will fluctuate with the various award ceremonies)
Bolly Woods says, Got a question for you two gents: Outside of the hits and misses, did Bollywood have any interesting trends in 2007, that could indicate the course of the future?
Ashok asked, Raja Sen, I had read your article where you rates Shilpa Shetty at no.1 and Aishwarya Rai at no.2. This was just not justified. I feel Deepika should be at no.1 and Tabu/vidya balan at no.2.
Raja Sen answers, Ashok, with due respect to your opinion, the feature was one about power and box office clout in 2007, and this was definitely a big year for Shilpa. As for Ash, her wedding itself created a media circus the likes of which we haven't seen before.

Raja Sen says, Bolly, I must say it is the year for smaller films. In the final reckoning when you look back at 2007, you'll remember not just the Chak De but films like Manorama Six Feet Under and Bheja Fry, smaller successes that made as much of an impact or got great appreciation.
Bolly Woods says, Raja: Fair enough, but is that happenstance, or is it a pointer to what is to come, to a direction more will follow, is my question here.
serioussam asked, In a year where some bold experiments were made, and hearteningly, many of the films parading about cliches and pre-packaged pap bit the dust, why, do you think, there was a dearth of actual, honest to goodness great films? Middling to good films, sure, but no great ones. Do you think there bankruptcy shows signs of leaving the industry come 2008?
Raja Sen answers, I think there's definitely hope, Sam. It is indeed great to see the audience rejecting regression and cliche, and hopefully the financiers would notice this as well as you and me. Yes, it isn't the year of one true standout 'great' film, but they can't all be like last year, can they?
Suparn Verma says, Bolly Woods: The biggest trend which will be less towards the content of filmmaking but in the general structure of the Hindi film industry. The future is that individual producers will cease to exist one by one, the big ones will form alliances with various big studios and we are going to see a MAJOR influx of Hollywood studios, along with the 5-6 major ones here
Raja Sen says, As for trends, the money is going to go up even higher. With millions of corporate and overseas funds entering film production, Indian films are only going to get bigger-budgeted and our actors increasingly overpaid.
Bolly Woods says, Suparn: Thanks, but if that is where we are going, what do you see as its influence on the industry? Or is it the same product, different -- larger, glitzier -- label?
Raja Sen says, Bolly, I think it's definitely a sigh of things to come. Smaller films are increasingly plausible projects to finance today, and movies like Bheja Fry and Loins have proved that you don't need stars or songs to get people into theatres. It's viable to make a small-budget film and still reach an audience.
Suparn Verma says, Bolly Woods, its so cyclic. Remember the mid 90's the era of Bharat Shah, it was the same thing: top actors, music directors and technicians being paid ridiculous amounts of money. The music market overseas soared!!! then the market bubble burst with a worldwide recession. Then things settled down and its started again. Its not a new trend, only the players have changed. The money has got bigger. Honestly, there are only so many stories and genres to play with, so what we will have next after the big starcast movies will be visual extravaganzas like the ones in China among other things, and hopefully a very strong independent cinema movement
TestTime asked, Do you see films from South? Specially tamil films which i feel technically is far superior than Bollywood..
Bolly Woods answers, I do, to an extent. I would think thematically, Tamil films are throwing up the occasional interesting surprises; technically, I would suggest there was a time when Tamil was superior, distinct, but so many of the technicians work in Bollywood these days that the distinctions have blurred. Very recently, I saw and liked Veyil, Kalluri (except for its overblown climax), Evano Oruvan (despite its obvious resemblance to the Michael Douglas starrer Falling Down) and such.
Ganesh asked, Do film critics get their pockets filled by producers while writing reviews ? Raja Sen, pls reply. Does SRK pay u ? Will u ever write anything against him ?
Raja Sen answers, Ganesh, I wish you were right and I got paid to write good reviews. It does happen, so I hear, but I haven't yet been the recipient of any such favours. As for SRK, I'd suggest you look at my reviews for Don and KANK. :) 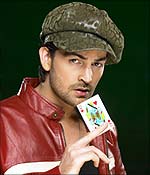