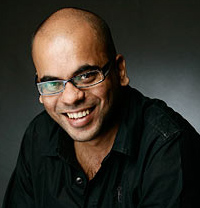 Aatma is journalist-turned-filmmaker Suparn Verma's third film, and his first tryst with the horror genre.

The film, says Suparn, will play with your mind, instead of using 'scare' tactics typical with the horror genre. Aatma has already generated a huge buzz ahead of its March 22 release.

Suparn's earlier films were Ek Khiladi Ek Haseena and Acid Factory. He has written the screenplay for 11 films, including Aatma.

In his earlier avatar as journalist, Suparn worked at rediff.com -- he was a member of the founding team and the journalist assigned to spearhead rediff.com's chat efforts. Many of you may recall Suparn from the old days.

Now, you can chat with Suparn about his new film, and about the film industry , right here!

Join Suparn Verma as he connects with Rediff readers from 3 pm to 4 pm on March 19, only on ZaraBol.

Also Read:
Bipasha Basu: I am a greedy actor