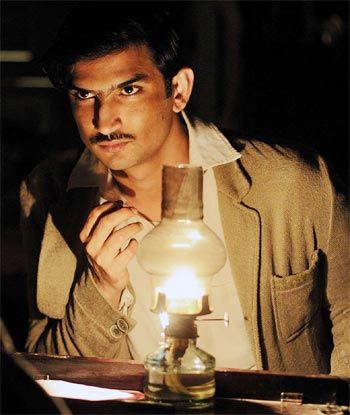 'The problem of 2015 is not who did it but how we should punish the guy who did it. The judicial system in our country is hugely inadequate.'

Dibakar Banerjee talks about his new film Detective Byomkesh Bakshy and much more.

From making a small budget film Khosla Ka Ghosla in 2006 to his most ambitious project till date Detective Byomkesh Bakshy in 2015, Dibakar Banerjee has come a long way, and has become a sought-after director today.

Yet, he remains modest.

When he arrives late for an interview at Yash Raj Film's suburban Mumbai office, he immediately apologises.

A fan of the Byomkesh Bakshy stories from the age of 12, Dibakar has always wanted to have his own interpretation of the detective. But he says his new film is *not* meant for die-hard Byomkesh Bakshy fans.

"I wanted to tell the coming-of-age story of Byomkesh, the story of how he became what he became and not how he goes about solving a case," Dibakar explains.

Dibakar talks to Sonil Dedhia/ Rediff.com about his early memories of Byomkesh Bakshy, his interpretation of the detective and the struggles he went through to make the film. 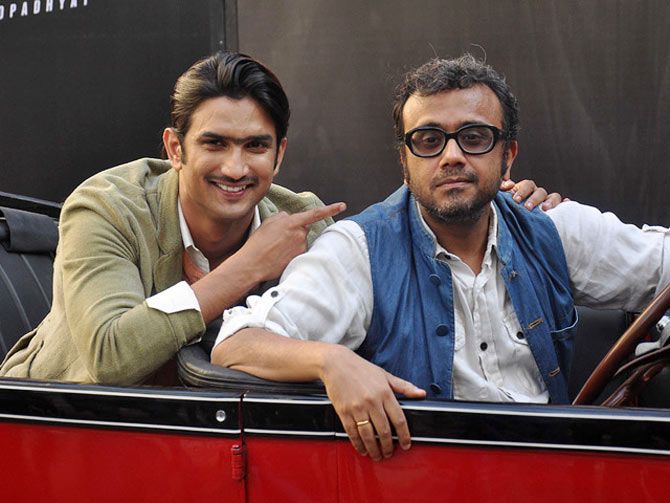 What are your early memories of Byomkesh Bakshy?

Reading Byomkesh was forbidden when I was 12 and that is my first memory of it (Smiles).

I was told to read it only after I was 16. And if you restrict a child to do something, that's the first thing he will do! (laughs).

My next memory of Byomkesh is the imagery the words in the novels evoked.

In my film, Byomkesh takes up his first case, where he meets Ajit (a character in the novel) for the first time. This has never been explored so far, in the novels or in film adaptations.

Is that why you wanted to start at his beginnings in your film?

I did not always want to do that.

It happened when Urmi Juvekar (the scriptwriter) and I sat down to discuss. The first question she asked was 'Why make Byomkesh? Everyone has done it so many times.'

That's when we decided to explore the detective as a human being.

We decided to tell the coming-of-age story of Byomkesh, how he became what he became, not how he goes about solving a case.

Till now, we have seen the detective solving a case. The audience is not connected to the detective, they are interested in the case.

In our film, we wanted the audience to connect with the character.

A noir treatment for a subject like Byomkesh Bakshy is unique. Was that always the plan?

I have no idea why I thought of giving it a noir treatment.

When I wrote the first treatment in 2007, it had a graphic novel and pulp magazine undertone. I think that is the universal undertone for all detective subjects.

Gifted writers rise above this through the sheer literary ability to evoke truth in a fiction story. That's what Sharadindu Bandyopadhyay (who created Byomkesh Bakshy) did.

When I would read Byomkesh as a kid, the images that came to my mind were of mid-century Calcutta and a noir feel, but in an Indian way.

For me, Byomkesh Bakshy was not some guy imitating someone in the western world, wearing a trench coat and Fedora hat, smoking a pipe. He was a man, who wore a dhoti and kurta, travelled in a tram, bought paan from the roadside and went about solving a case. You were quoted as saying you wanted to bring back the era of Bengal noir visually.

Bengal noir is my term for my favourite stories and illustrations that I used to read as a kid.

It was not restricted to Byomkesh Bakshy but many other pulp-ish novels like the Rohoshyo Romancho series, The Black Shadow or In the Forest of The Bandits. They were sensational stories with amazing illustrations, done by famous illustrators of those times. It was curious mash-up of Bengali sartorial, artistic taste and the western noir.

Which is your favourite noir film?

My favourite noir film would be... (thinks hard) Chinatown (starring Jack Nicholson and Faye Dunaway). It is a re-interpreted noir film made in the 1970’s, and is about the 1930’s. It has contemporary music and its treatment is just amazing.

Feluda turned 50 in March 2015. Why didn’t you make a Feluda film instead?

Feluda is for teenagers while Byomkesh Bakshy is for all ages.

While reading Byomkesh novels, I found it more cinematic.

Feluda has been interpreted cinematically twice by Satyajit Ray and many times by his son Sandip Ray. So it's not virgin ground.

At the same time, making a Hindi movie on Byomkesh Bakshy excited me.

How did you make Sushant Singh Rajput believable as Byomkesh Bakshy?

Sushant and I knew we had to really prepare for this movie. It was a huge task and not easy at all.

We did a lot of research. Months before the shoot, Sushant went to Calcutta, walked around the streets with a cap, at the risk of being recognised.

Being a Bengali helped only to the extent that I could read the Byomkesh Bakshy novels in its original language and capture the essence perfectly. I never lived in Calcutta. I was brought up in Delhi, so I had to research a lot.

Sushant lost 12 kilos for the role. He became obsessed with the film.

During the day, he would shoot, and in the night, he would go over the scenes, make notes and then ask me questions the next day. He became insomniac. I believe he still hasn’t come out of it; he still doesn’t sleep properly at night. He switched off his cell phone for four months during the shoot so that no one could access him. Was it a conscious decision to set the film in the 1940s?

Yes. That's the most exciting era in the history of Calcutta.

There was political turmoil and the independence struggle. At the same time, the Japanese were invading the city. There was Netaji Subhash Chandra Bose and the Quit India Movement.

Black marketing, gang wars and smuggling were rife in the city.

How did the elders in your family help in your recreation of 1943 Calcutta?

It was not only about researching about the history of Calcutta. We had to know in detail what the street hawkers’ cries in 1943 were, the best-selling brand of cigarettes then, what the tram bell sounded like.

During those times, Calcutta was a multi-ethnic city. There were American soldiers, British colonial officers and a colony of Armenians, Jews and Afghans.

Jazz was playing in the clubs, a huge Chinatown existed in the city centre, which doesn’t exist anymore.

We met historians, who enlightened us with the architecture of that period.

My father, who is 83 years old, told me how Howrah Bridge had just been opened for commercial use in 1943, and it had barrage balloons to deflect Japanese bombs.

Another gentleman remembered how sirens sounded when Japanese bombers came in. He sang it for us, and we replicated it in the film.

We had the little details also, of people in bomb shelters putting something between their front teeth so that when a bomb fell, they wouldn't bite their tongue out of fear.

Which is your favourite Byomkesh film?

I consciously haven’t seen the recent ones because I did not want to get influenced.

I remember watching Satyajit Ray’s Chiriyakhana. I loved the first half. Uttam Kumar was a very stylish Byomkesh. I showed Uttam Kumar’s Byomkesh to Sushant to tell him to be the exact opposite.

I wanted an inexperienced, vulnerable and warm Byomkesh, whom you could connect with.

The film's soundtrack is very unusual -- rock music in a period film.

The music developed over a period of time.

I always wanted my film to have an anachronistic quality about it. I wanted to show 1943, yet the audience should feel that it's today's era.

My brief was that to imagine we have time-travelled to 1943 but the sensibilities should be set in the present. The music bridges the gap. It’s like playing with people’s perception so that when you watch the film, you forget it is a period film. 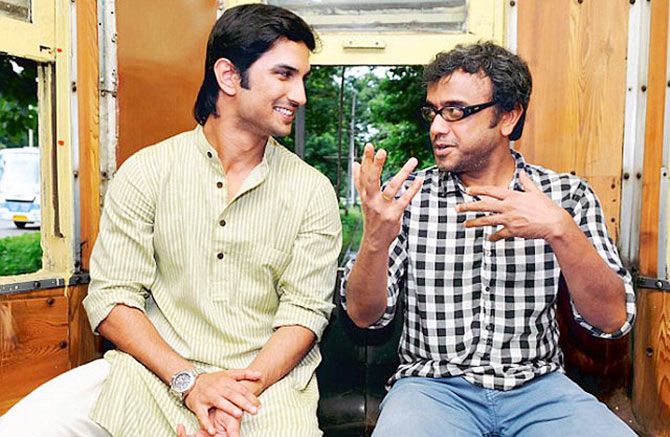 I think there would be a fundamental problem if that happened (Laughs). The problem of 2015 is not who did it but how we should punish the guy who did it.

The judicial system in our country is hugely inadequate, so I feel Byomkesh is too honest to exist today.

Byomkesh would look like Sushant in a T-Shirt and cargo pants (Laughs).