We've seen some cool dance moves this year, says Sukanya Verma. And then, we've seen these!

And Govinda sleep danced his way through the terrible, terrible Aa Gaya Hero.

If verve and versatility lend these madcap dance moves an edge, there are some that made us remember yesteryear choreography for all the horrifying reasons.

Here's a look at some of the WORST Bollywood dancing in 2017.

Elli Avram's long-limbed aggression gives 'shake a leg' an altogether different meaning. Only this version is more lewd than lively.

There are no words to describe the absolute monstrosity that is this scene from the recently convicted Gurmeet Ram Rahim Singh Insan's last release.

There's something distasteful about the manner in which a sludge-slathered Sunny Leone surfaces, right after a gruesome moment of Sanjay Dutt's rape revenge drama, to perform a gratuitous item number.

Just when you feel the days of provocative pelvic thrusting are long over, bang comes a crude reminder. This time in Shraddha Das's footloose seduction.

There's something really disturbing about treating your sweetheart's butt like bongo drums. It wasn't cool in 1997. It isn't cool now.

We don't feel so generous about his bizarre underarm itch inclinations in one song from his first big blooper in a long time. 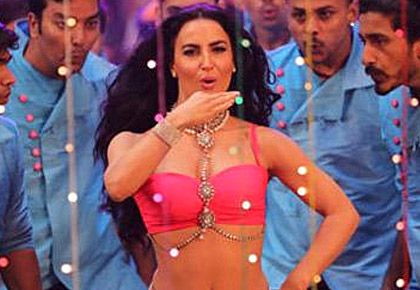