In Bollywood, young is in

Films exploring the angst of the urban youth are suddenly much in vogue. 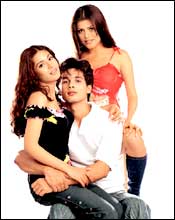 In this week's release, Supari, four young men in Mumbai turn to a life of crime for money and/or excitement. The film moves away from the young-want-to-have-fun premise that underlined recent films situated in and around the college campus.

This week's other release, Jhankaar Beats, is also about the 20-something generation grappling with urban ironies.

Now, other filmmakers are taking a more serious look at the youth and their aspirations. Vijay Kumar's Kahan Ho Tum shows a group of youngsters (Sharman Joshi, Sonu Sood, Sameer Soni and Ishitaa Arun) learn a few lessons of life when one of them goes missing in the jungle.

Says Kumar, "Films about the young have become synonymous with psychedelic colleges and students romancing all over the campus. There are many facets to the youth in our country. Why do we need to constantly harp on romance?"

While Vijay Kumar's Kahan Ho Tum is styled as a thriller, Deepak Tijori's Oops! about the lives of three male strippers (Kiran Janjani, Vikas Sethi and Adyasha) is more raunchy. Tijori feels the metro-centric wannabes need to keep up a certain lifestyle. "And stripping for a living is very much a part of Mumbai's high society culture," claims Tijori.

Like Padam Kumar's Supari, the protagonists in Lajmi's film are more driven by excitement than desperation. "Many children from well-to-do homes get into crime out of boredom or defiance. It is essential for us to look at the young in our country beyond stereotypical perceptions," says the 45-year old director, who has made films like Ek Pal, Rudaali and Darmiyaan.

Films about the urban young need not always be bogged down by social conscience. Fun films about the young also have a place in Bollywood. N Chandra, who made the successful teen film Style two years ago, was galvanised into doing a sequel Excuse Me, opening in August, with the same lead pair (Saahil Khan and Sharman Joshi).

Many of these projects are born out of necessity than an urgent need for cinema to address a topical subject. Lajmi candidly admits that getting star dates was an impossibility. "Hence Kyon with newcomers. Now," she says, "I feel I have never had more fun."

Today, these films featuring relatively untried faces seem to have found a sizeable niche market among urban audiences. Since such films cost a manageable amount to produce, their market can only grow in the near future.

And the largest beneficiaries of this wave are the newcomers themselves.