American actor Cadwick Boseman, best known for his titular superhero role in Black Panther and as baseball icon Jackie Robinson in 42, has died after a four-year-long secret battle with colon cancer. He was 43. 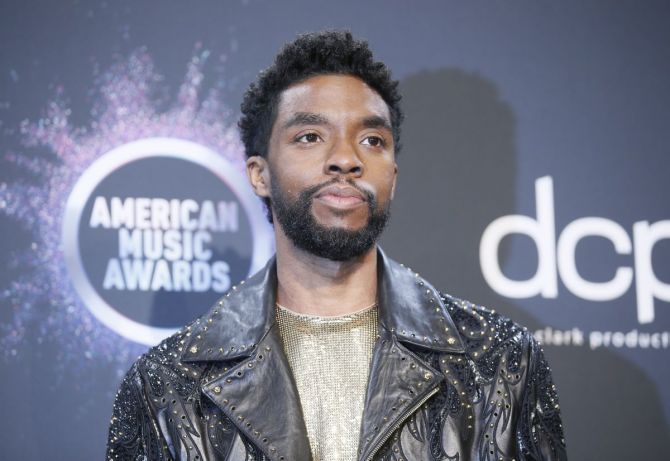 In a statement posted on his official Twitter handle, the actor's family said he was diagnosed with the disease in 2016.

He passed away at his residence with his wife and family by his side.

'A true fighter, Chadwick persevered through it all, and brought you many of the films you have come to love so much,' his family said in the statement.

'From Marshall to Da 5 Bloods, August Wilson's Ma Rainey's Black Bottom and several more- all were filmed during and between countless surgeries and chemotherapy.

'It was the honour of his career to bring King T'Challa to life in Black Panther,' they added.

The family thanked his fans and well-wishers for their best wishes and requested for privacy in these 'difficult times'.

Born in South Carolina to African-Americans Carolyn and Leroy Boseman, the actor studied at Howard University and graduated with a degree in directing.

Later, he attended the Oxford Mid-Summer Program of the British American Drama Academy in London and then to New York City's Digital Film Academy.

He initially worked as a drama instructor at the Schomburg Center for Research in Black Culture in Harlem, New York but moved to Los Angeles to pursue acting full-time.

Boseman started his career on the small screen with 2003 Third Watch, featuring in just one episode.

He made similar appearances in popular shows such as Law & Order, CSI: NY and ER.

He made his film debut with a minor role in 2008 sports drama The Express: The Ernie Davis Story.

His first movie as a lead star came in 2012's The Kill Hole.

The following year, Boseman played baseball star Robinson opposite Harrison Ford in 42. The film, which dealt with the issue of racial integration in American baseball, catapulted him to fame in Hollywood.

The actor was praised for his authentic and stoic portrayal of the former baseball player. Coincidentally, Boseman died on a day that Major League Baseball was celebrating Jackie Robinson day.

His next memorable role was in 'Get on Up', Tate Taylor's biographical drama on the life of singer James Brown.

But it was his turn as Wakanda king T'Challa aka superhero Black Panther, a role he played in four Marvel films, that brought him global popularity.

The Ryan Coogler-directed feature is considered a landmark film for the way it projects Black identity.

Boseman played T'Challa who takes on the mantle of Black Panther after his father, T'Chaka, the king of the fictional but powerful African country Wakanda, dies in a bomb blast.

Black Panther was a major hit for Disney-owned Marvel Studios, grossing over $1.3 billion in worldwide gross and becoming the first superhero film to be nominated for the Best Picture at Oscars.

The film is also popular for giving the 'Wakanda Forever' salute that reverberated around the world soon after the film's release and started trending on social media as the news about the actor's death spread.

Boseman reprised the role of Black Panther for Anthony and Joe Russo's two-part Avengers epic -- Infinity War and Endgame. Both the films were global hits.

He had recently appeared in Oscar-winning filmmaker Spike Lee's timely movie Da 5 Bloods, about a group of aging Vietnam War veterans who return to the country in search of the remains of their fallen squad leader.

His last film will be Ma Rainey's Black Bottom.

Evans said he was 'absolutely devastated' by Boseman's death.

'This is beyond heartbreaking. Chadwick was special. A true original. He was a deeply committed and constantly curious artist. He had so much amazing work still left to create. I'm endlessly grateful for our friendship. Rest in power, King,' the actor tweeted alongside his photos with Boseman.

Ruffalo called Boseman 'one of the all time greats' of Hollywood.

'All I have to say is the tragedies amassing this year have only been made more profound by the loss of #ChadwickBoseman. What a man, and what an immense talent.

'Brother, you were one of the all time greats and your greatness was only beginning. Lord love ya. Rest in power, King,' Ruffalo tweeted.

Larson said Boseman was known for his radiance and peaceful life.

'Who stood for so much more than himself. Who took the time to really see how you were doing and gave words of encouragement when you felt unsure. I'm honored to have the memories I have,' she said in a statement posted on Twitter.

Cheadle said he will forever miss Boseman, calling him his 'brother'.

'I will miss you, birthday brother. you were always light and love to me. My god ... forever and ever...' he tweeted.

Boseman's Black Panther co-star Sterling K Brown wrote: 'I don't have words. Rest In Peace, Bruh. Thank you for all you did while you were here. Thank you for being a friend. You are loved. You will be missed.'

Hollywood star Denzel Washington said Boseman was 'a gentle soul and a brilliant artist, who will stay with us for eternity through his iconic performances over his short yet illustrious career'.

'A warrior of light till the very end. A true king. I am without words. May he rise in power,' actor Kerry Washington wrote.

'The true power of @ChadwickBoseman was bigger than anything we saw on screen. From the Black Panther to Jackie Robinson, he inspired generations and showed them they can be anything they want - even super heroes. Jill and I are praying for his loved ones at this difficult time,' he posted on Twitter.

Indian-origin Senator Kamala Harris, who is the Democratic Party's vice-presidential candidate, said she was heart-broken to hear about Boseman's death.

'Heartbroken. My friend and fellow Bison Chadwick Boseman was brilliant, kind, learned, and humble. He left too early but his life made a difference. Sending my sincere condolences to his family,' Harris tweeted.