Day 5 in the Bigg Boss house saw Nimrat Kaur Ahluwalia getting fired from the captaincy.

The episode begins with Sajid Khan and MC Stan pulling Abdu Roziq's leg and talking about him getting married in the BB house.

Abdu entertains them with his antics and it's fun to see him getting along with everyone despite the language barrier.

Throughout the episode, it's Abdu and his friendly banter with everyone that's most fun and interesting to watch.

Tina says instead of winning the show, they could just steal Abdu's shoes which would make them equally rich.

Abdu quickly grabs his shoes and hides them in his bag and it's adorable. When the phone rings in the living area, Nimrat knows she's in trouble.

Bigg Boss tells her to gather everyone as she's fired from the captaincy.

However, since Nimrat is the first captain of the season, she's given a chance to redeem herself.

As for the housemates, the first one to run and ring the gong in the garden area will get to compete with Nimrat for the captaincy.

Shalin Bhanot is the first to ring the gong and gets ready to fight it out with Nimrat.

Both of them have to stand grabbing a basket on their head for as long as possible in the garden area.

Other contestants are allowed to put anything in the basket to make it heavy.

The task begins and Priyanka Chahar Choudhary makes it clear she doesn't want Nimrat to win and keeps a big plant in her basket.

Shiv Thakare grabs a few dumbbells and puts them in Shalin's basket, making it very hard for him to stand still.

Within few minutes, Shalin drops his basket and Nimrat wins the task.

She regains her captaincy. Sumbul Touqeer who started off playing the game well, seems lost in the house.

She breaks down while chatting with Sajid as she feels nobody is taking her seriously because of her.

Sajid disagrees and makes her understand the game is such that everyone has to try hard to fit in.

Abdu and Sajid try to cheer her up. Later, Sumbul gets upset when Shiv says something to her while he is conversing with Shalin. She then confides in Shalin about what's troubling her.

In the evening, an entertainment task is announced for Gori Nagori.

Shalin tries hard to convince Sajid and MC Stan to not support Gori.

But when Gori dances, she impresses everyone. Gori wins the task and saves herself.

At night, Abdu and Gautam have fun flirting with Soundarya Sharma.

Before going to bed, Nimrat, Gautam and Soundarya tell Shalin that it's Tina who has been gossiping about him and Sumbul for no reason. 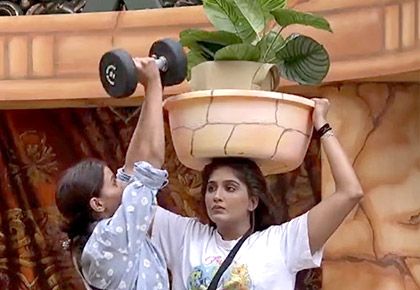