'I had enough of Bigg Boss'

The second season of Bigg Boss is already rich with its share of controversies. While Jade Goody had to leave the show unexpectedly, Sanjay Nirupam was the first to be eliminated from the house.

The politician claims that he enjoyed his stint in the Bigg Boss home, even as housemate Sambhavana Seth felt deeply insulted by his words.

Nirupam spoke to Nithya Ramani about his experience in the house, and more.

You are the first contestant to be eliminated from Bigg Boss.

I am very happy [to be eliminated]. I will get an opportunity to work and interact with my party members. I had left my work pending and joined this show.

Why did you accept the show in the first place?

(laughs) I joined this show because I wanted to have a different kind of experience. Bigg Boss approached me and told me all the rules and regulations -- living in the house for 24 hours, with 32 cameras, without any kind of contact with the outside world, with people from different walks of life, different mindsets and different religions living with you.

Living like this among strangers, where you have no privacy, was a challenge for me and I wanted to take it up. It was a wonderful experience and I had fun. But I don't want fun anymore. I had enough.

I wasn't happy when I went inside the Bigg Boss house because I had left all my work pending. But I wanted adventure, and this was an adventurous trip for me. It was a paid holiday for many but not for me. But I thought it was impossible to live in the house under such conditions for three months. It scared me and I thought, if I were given an opportunity to leave this week, I would like to leave.

You had requested the inmates to vote you out?

Yes. We entered the house on August 16, and were asked to name someone for the week's eviction. Everybody was upset, as we had hardly interacted with each other. So I volunteered to be voted out. I lived there for a week, and that was enough for me. 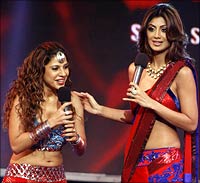 There was quite a controversy about your remarks on housemate Sambhavana Seth.

When I came in, my friends told me that there would be a contestant named Sambhavana Seth, who is an item girl. I have a clean image and am dignified. Since I have to live in a house with a girl like her, my party members got apprehensive. I didn't even know who she was nor have I seen any of her songs. So I told my well-wishers that I was not in the house to do anything with her. For me, she was just another contestant.

My friends were worried if I was given a task to massage Sambhavana's body, like in the previous season. How would I manage that? I was sure I wouldn't do such a cheap and undignified act.

With this reference, I asked a question -- an item girl has a image of letting go all of her shame and dignity and is willing to go to any extent to do things. Why is that so? What could be the possible justification for this kind of act? The most important thing for an Indian woman is to safeguard her reputation and dignity and never compromise with it. So I just asked a simple question: why do item girls compromise their dignity and respect? All she had to do was answer my question and justify her act.

Instead, she lost her cool and brought the house down. Now what I derived from this reaction was that she didn't have an answer. That's why she got angry. Secondly, she still has shame and gets upset when somebody points a finger on her dignity. That said, she has apologised for her behaviour.

course, I would not react in the same manner as her. There is a difference between us and that difference should remain. She also pointed out why such questions are asked by only politicians and no one else. I agree with her. Politicians are answerable to the public. When someone is in a responsible position and has the power to stop atrocities, why don't they?

You had a tiff with the late politician Pramod Mahajan, and you had to live under the safe roof as his son, Rahul. How was your rapport with him?

Firstly, I did not have any tiff with Pramod Mahajan, as he was very senior. I respected him a lot. We just had a difference of opinion. Carrying that grudge with his son did not make sense. Both of us were friendly. I made sure the past didn't mix with the present. One should not talk ill about someone, who is no more. 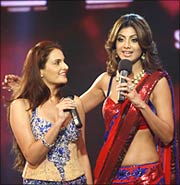 You have built a good rapport with housemate Monica Bedi, and even promised to get her a house.

She is genuinely trying to make a new beginning. She was thankful to Bigg Boss for giving her an opportunity to explain her side of the story. I believe in giving people a second chance. She has gone through many trials, and received criticism from everyone. So she deserves a chance to tell her side of the story.

I don't think she is a great actor to manipulate things. She just wanted to get back into films. She was worried that she wouldn't get a house because of her past. People are apprehensive about giving her a house. I am a position where I think I can help her. I have enough contacts to help her get a house. If nothing happens, I am ready to become a guarantor for her.

Ramdas Athavale, the leader of the Republican Party Of India, was upset that Bigg Boss did not accept him because he was a Dalit, and took you instead. His party members also broke down the office of Colors, the television channel airing this show.

I didn't know about this until I came out of Bigg Boss. It is very unfortunate that this happened. I am sure that being a Dalit has nothing to do with this. One should not think on those terms. I didn't know that he was approached in the first place. If I had known, I would have opted out myself. I don't know if Bigg Boss even knows what castes the inmates belong to. One should not politicise this issue.

But I think it is good he didn't come, as it is not easy to live in there. For a politician to live under a scanner for 24 hours is not easy. For instance, I asked Sambhavana a simple question, and it became a huge controversy. If her colleague asked her this question, it wouldn't have become such a big issue. If this had happened to Ramdasji, he would have been embarrassed. I don't mind being embarrassed rather than letting him face trouble.

What were your best moments in the house?

My best moments were with Ehsaan Qureshi. He is a very nice person, an intellect and very well read. We had a lot in common and so had a great time.

I cannot comment on that. There is still a long way for them to show their true colours.

Who do you think voted against you?

Shilpa Shetty did not tell me. But I am sure about two people -- One was Jade Goody, as she knew only my name among all those in the house.

But I also know Ehsaanbhai wouldn't have voted me out.