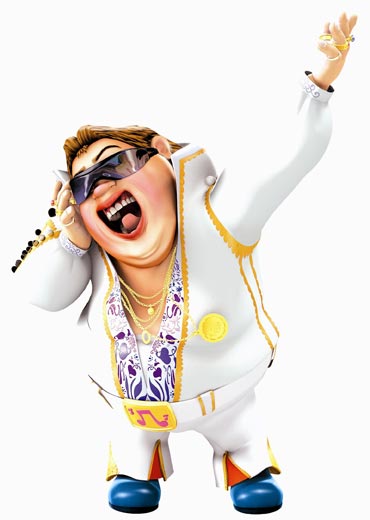 This Friday's release Toonpur Ka Superrhero seems to be in trouble.

Music composer Bappi Lahiri has sent a legal notice to the makers, as he feels one of the animated characters in the film -- cally Guppy --  resembles him.

The notice says that it gives the wrong impression that the composer is part of the film, and so requests the makers to delete the character from the movie. He has also asked them to issue a public apology.

"I am in this industry for 40 years. Today, Bappi Lahiri is a brand. They have made a cartoon character of mine have called it Guppy Bahiri and have made fun in the whole film," Bappi Lahiri said.

"I have seen the film's promo, and it shows this character wanting to sing a song but the hero doesn't want to listen to it," the composer continues. "I have done more than 450 films and have always respected my elders. They should have respected me and shouldn't have made fun of me."

"The character looks similar to me, right from my face to my black sunglasses and multiple gold chains. I wear it with pride, as that is my image and I am not ashamed of it," he said. If that's not all, Bappi added that they hurt his sentiments by copying his Bengali accent as well.

But would he have given the maker permission for the character if they had asked for it? "Neither Ajay, Kajol nor anyone bothered to get in touch with me," Bappida replied. "If they had asked for permission, I would have thought about it and given a go ahead. In the past, I have worked with Salman Khan in Main Aur Mrs Khanna as a disco king. I have another film called Dard-e-Disco releasing soon."

Quite a few television serials poke fun of his singing style but that doesn't bother him. "Making fun on TV is a different thing," he said. "People make fun of Amitabh Bachchan also. But it's wrong."

The fate of Toonpur Ka Superhero will be decided tomorrow as the Delhi High Court has fixed Thursday, December 23 for further hearing of the matter.

Meanwhile, Toonpur director Kireet Khurana clarifies: "Guppy, Toonpur's cacophonic bard, is an original character. A character or individual may be reminiscent of some another character/person that we may know. However, in Guppy's case, he is characterised as a cacophonic bard, wearing Elvis' clothes, with lights shining on the sleeves of his dress (inspired from an outfit worn by Amitabh Bachchan in Deewana) and Guppy's animated notes emanating out of his singing/playing an instrument are like irritating, pesky ants for the listeners. Given the fact that these dis-similarities are glaring in Guppy, and the fact that Bappida himself has admitted that he was fascinated with Elvis' style of dressing and his jewellery/ ornamental garb, the similarities between Guppy and Bappida are hardly anything that can be substantiated."

Khurana added that they were consulting with their lawyers and 'dealing with it appropriately'.