'We will never really lose him because in death, his spirit, trapped in a frail body, has been set free and will surround us like the air we breathe.'
Shabana Azmi, Asha Parekh, Zeenat Aman, Raakhee, Hema Malini share their memories of Shashi Kapoor with Subhash K Jha. 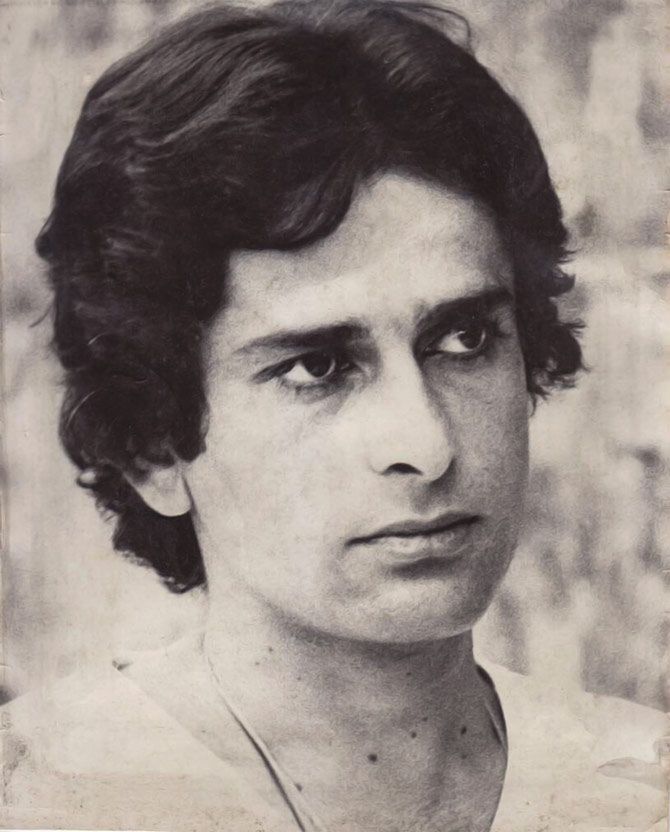 IMAGE: Shabana Azmi posted this picture on Monday evening, and wrote: We will miss you.

I believe the skies opened up and it rained in Mumbai as though grieving on behalf of all of us, his countless fans, admirers and colleagues.

When I last met him in the ICU in hospital, I knew I wouldn't be seeing him again.

He was a pale shadow of his former self...only the long lashes curled up and thick remained.

The phone rang in my hotel room in Sydney. "Did you hear about Shashi Kapoor?" asked my goddaughter."

"Yes," she answered in a whisper.

A cold shiver ran through my spine as I put down the phone.

Within minutes, my phone was flooded with messages.

Shashi Kapoor was a dearly loved man and the obituaries came in earnest.

He was born to his mother after her child-rearing years and she was embarrassed to find herself pregnant. She tried all kinds of herbal concoctions to drop the child, but he was determined to be born.

Shashiji inherited a love for theatre from Papaji and would often say that he would have probably never joined films had Prithvi Theatre not closed down and if Shakespearewallahs had not moved to London.

My mother Shaukat Kaifi speaks of Prithviji's compassionate nature in almost hagiographic terms and Shashi was truly his father's son.

He helped a number of people financially and quietly. His generosity were aspects of his personality he kept hidden from public view. 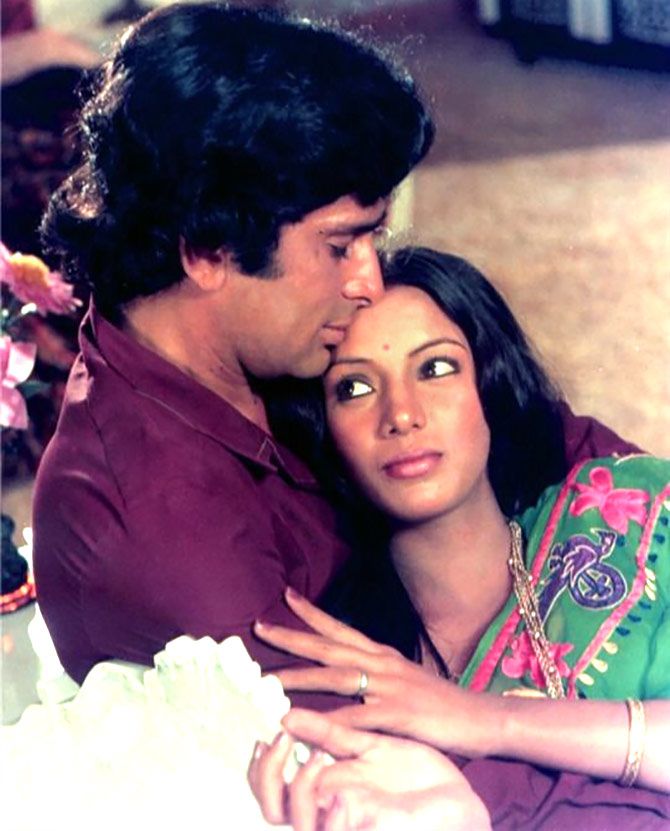 In fact, he could be rough and scathing even. He never said a kind word to me, always ribbing me, but behind my back, I would learn that he praised my work and would often say that he was proud of me.

He taught me many things, including how to avoid top light because it was so unflattering.

I used to find it excruciating to face harsh reflectors. In the outdoor scenes, my expression was inevitably the same, whether it was a romantic scene or an emotional one, or comic. My eyes would crinkle up.

Like a strict teacher, he would force me to face the reflectors till tears rolled down my cheeks.

Finally, I did get trained to face the reflectors.

During the shooting of Junoon, he would scold me for listening to the Beatles between shots.

"Why don't you listen to Begum Akhtar instead? Shaukatji se kuch to seekha hota!"

My mother was known to get into her character hours before a performance and would surround herself with stimuli that would help her inhabit the world of the character she was playing.

I would make a face and reluctantly switch off the Beatles to put on Begum Akhtar. I never admitted to him that it did help.

I used to complain that he only scolded, bullied or made fun of me. But in a crisis, he was rock solid.

In 1986, I had taken up the cause of slum dwellers in Colaba (south Mumbai), whose homes had been demolished to make way for an MLA hostel. We knocked on several doors, demanding alternate housing for them, before Anand Patwardhan and I, along with three slum dwellers, went on a hunger strike.

No actor had gone on a hunger strike before and our fraternity was confused about whether to express support for me.

On the fifth day, my blood pressure started falling and my mother was worried.

Shashi Kapoor turned up wanting to know our demands.

He left soon after and went straight to then chief minister Shankarrao Chavan, telling him that the film industry had always supported the government in a crisis and now it was the government's responsibility to reciprocate.

The CM summoned the housing minister, who came back with Shashiji to the Colaba footpath where we were, conceding alternative land for the slum dwellers and urging us to end the hunger strike with a glass of juice.

I went on stage and was about to thank Shashi Kapoor for negotiating the deal for us when I saw him step away from the media glare, and disappear.

The fact is that I didn't know how much longer we would have continued with the strike had Shashiji not intervened. But he didn't want any accolades and never spoke about it, ever.

That's the kind of person he was.

I'm referring to him in the past tense but we will never really lose him because in death, his spirit, trapped in a frail body, has been set free and will surround us like the air we breathe. 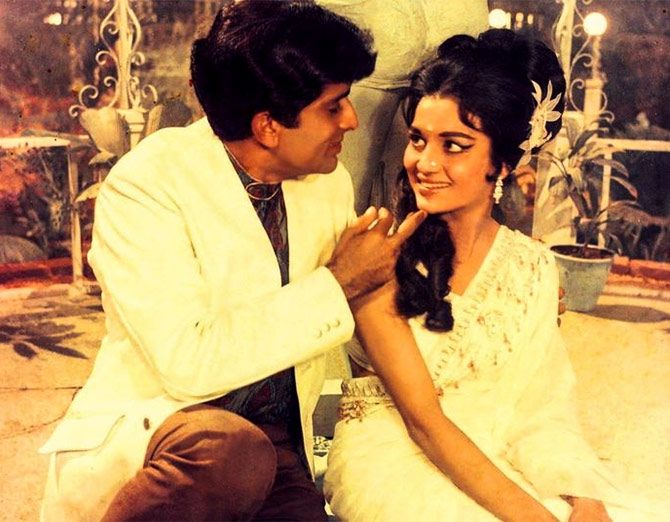 What a lovely thoughtful courteous and kind person Shashi Kapoor was!

A thorough gentleman. Not just me, he looked after all his heroines so beautifully.

I think I did four films with him. Out of these, two films Nasir Husain's Pyar Ka Mausam and Mohan Sehgal's Kanyadan are remembered to this day.

I remember during the shooting of Kanyadan in Kulu, I strayed into the wilderness with some of the crew. Shashiji came looking for us.

He was so upset that we had wandered away. "Anything could have happened because bears roam in the area," he said.

I've seldom come across a more caring and chivalrous hero. I had the privilege of working with both Shammi and Shashi Kapoor. They were both unique, so different from one another. And they both had a great sense of rhythm.

And he had the most amazing marriage. His wife Jennifer was the most perfect wife I have ever seen. She looked after her husband and after all of us when we were shooting together.

I think Shashiji lost his will to look after himself after his wife passed away. It was sad to see him suffer so much in his final years.

He was on dialysis just like his brother Shammiji before him. I had gone to see him in hospital a few years ago with my friends Waheeda Rehman and Nanda.

The last time I met him was when he got the Dadasaheb Phalke award. He had become so frail.

To see my hero who out-danced me in Pyar Ka Mausam on a wheelchair was heartbreaking.

Shashi Kapoor was the last of my heroes. Now they are all gone. 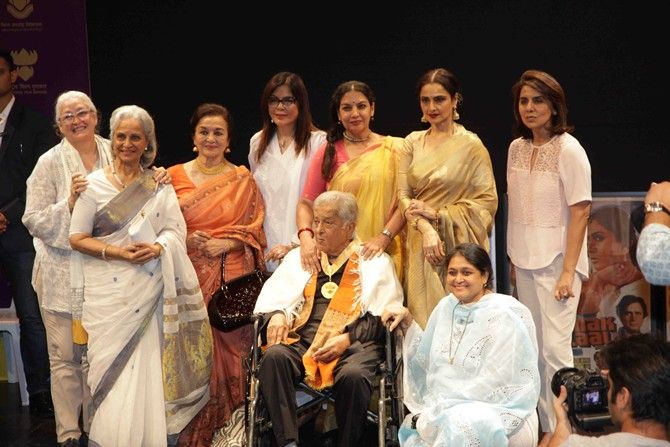 IMAGE: At an event to celebrate his being awarded the Dadasaheb Phalke Award at the Prithvi Theatre, May 10, 2015: Shashi Kapoor is flanked by clockwise from left: Nafisa Ali, Waheeda Rehman, Asha Parekh, Zeenat Aman, Shabana Azmi, Rekha, Neetu Kapoor and Supriya Pathak.

I did some of my most enjoyable and unforgettable films with him. But before that, I remember when I was studying at the St Joseph's Convent Shashiji came with his wife to perform a play in our school.

All of us schoolgirls were in a swoon. He was devastatingly handsome. Later he lived down the same road as me. And we'd bump into one another.

I think the first film that we worked on together was Roti Kapada Aur Makaan. It was a very important film for me. Shashiji was a terrific co-star in what was a very complex role for me with shades of grey. The film was a big hit.

But the one that we had most fun with was Chori Mera Kaam a few years later. It was a comedy and we improvised like crazy. Almost every scene was filled with dialogues that we thought up on the spot.

Shashiji was a veteran of comic timing. I was new to comedy. But because he was so supportive I could pull it off.

That was what defined Shashiji: A sense of ongoing generosity towards his co-stars. 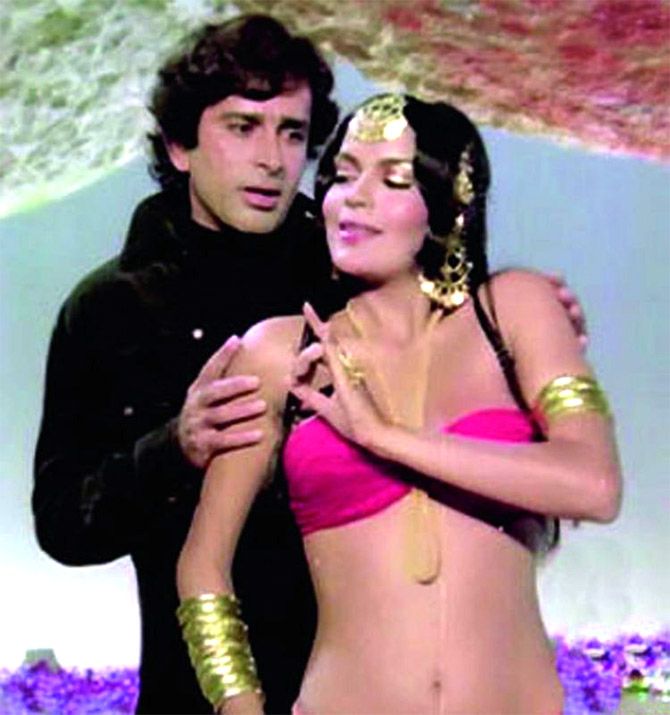 After Chori Mera Kaam we did what was perhaps our most talked about film, Raj Kapoor's Satyam Shivam Sunderam.

My God! What an uproar that film created. Shooting the film was not easy.

I remember Rajsaab kept calling Shashiji 'taxi'. He meant the number of films that Shashiji was doing at that time.

Rajji very firmly told Shashiji he didn't want the 'taxi'. He wanted Shashiji's full attention. Both of us had to be fully focused on this one film.

Every gesture, every nuance, every movement of Shashiji and I were done by Rajsaab.

He would tell us where to stand, how to walk, how to sit. We were mere puppets. The approach to our roles in Satyam Shivam Sunderam was quite the opposite to what we did in Chori Mere Kaam.

I remember Shashiji was shy about taking off his shirt under the waterfall in Satyam Shivam Sunderam when were shooting the song Yashomati Maiya. He didn't think he had the physique to pull it off.

It was always fun to shoot with him. He was gracious and warm, courteous and gentlemanly.

I last met him at the Prithvi Theatre when he was honoured for receiving the Dadasaheb Phalke award.

Though he was unwell I could see the look of warm recognition in his eyes.

He held my hand warmly and I knew he remembered all the wonderful times we had shared while shooting. 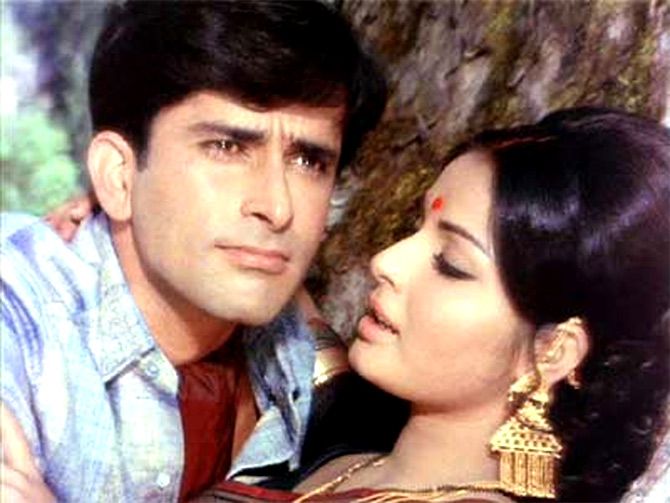 No, seriously, I was in awe of Shashi Kapoor.

Whatever I've learnt about self-discipline and punctuality came from him only.

During our first film Sharmilee, he would reach the location in Malad (north west Mumbai)for a 7 am shift much before me although I stayed much closer to Malad (Shashi Kapoor then stayed on Nepean Sea road, south Mumbai).

Director Sameer Ganguly was very softspoken. So Shashiji did all the dada-giri during the shooting.

One day he came to me and warned me, "Raakhee, if you don't reach at 7 am your bags will be packed and you will be sent back to Bengal."

I got so scared that I came on time after that. I'd reach the location even before the sweepers.

If we were at the airport he would pick up the vanity case and other luggage of any lady he came across.

If there was a crowd at a shooting he would clear it for me to feel comfortable. These qualities I've never encountered in any of my heroes.

Of course, he loved my cooking. Whenever the lunch dabba filled with green salad would go back home untouched, his wife Jenniferji would call me to ask if her husband was shooting with me.

The last time I met Shashiji was at a Ganpati festival in Pune. I didn't want to see him the way he had become in his final years. 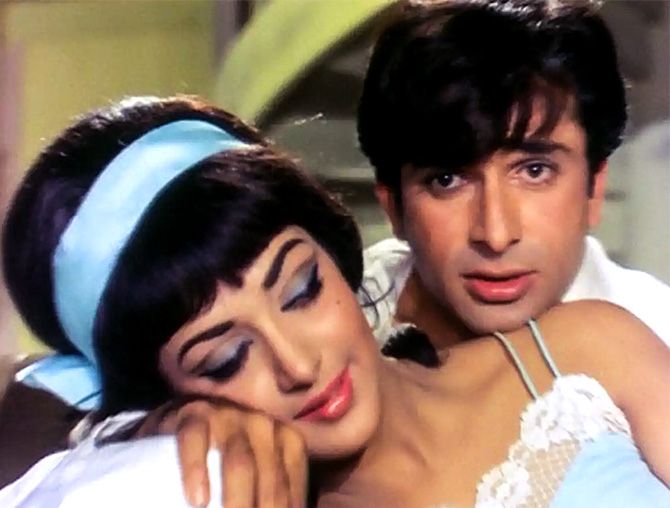 I did Abhinetri with him when I just started my career. We had a wonderful time shooting for that film.

I remember the song Sa Re Ga Ma Pa where my character had to teach Shashiji to sing and dance. It was hilarious because he was far more experienced than me.

I did my debut film -- Sapnon Ka Saudagar with Shashiji's brother Raj Kapoorsaab. Later I did Andaz with Shammi Kapoorji. So I worked with all three brothers who were very different from one another.

Shashiji was very urbane, sophisticated and Westernised. During Abhinetri he put me at ease with his pranks and jokes.

He was always full of fun and yet never discourteous.

I never felt I was working with an established actor. We went on to do Naach Uthe Sansar and Jahan Pyar Miley. Though they were good films none of these clicked and producers were reluctant to cast us together.

Until Trishul where Yash Chopraji cast us together again. We met with the same warmth even after so many years.

Shashiji was a class apart. He knew how to treat a lady.

When I worked with him I was sure of being comfortable on the sets. I wish I had done more films with him. 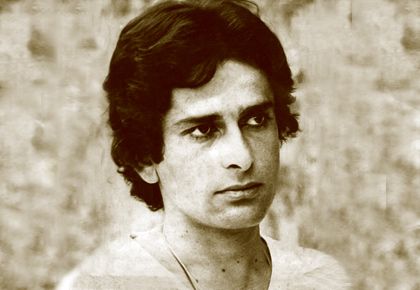 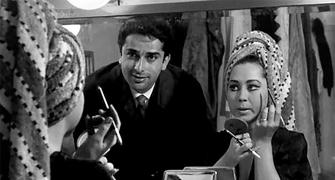 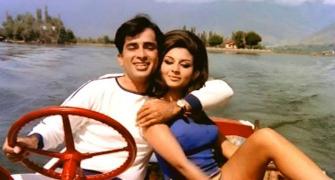 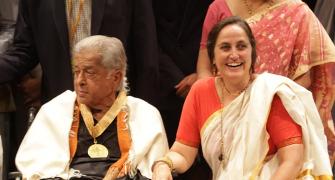 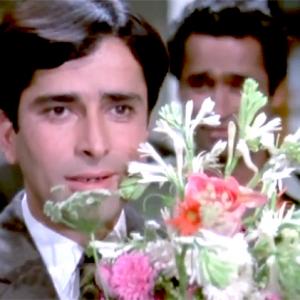 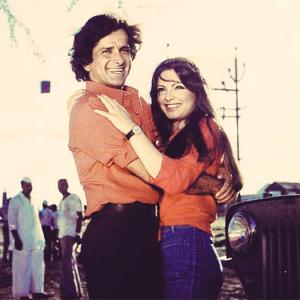