'I couldn't have hoped for a better birthday present' Asha Parekh turns a year older on October 2, but there will be no birthday celebrations this year.

"It's a big blow to our family. No one is in a celebratory mood. Besides, at my age, what is there to celebrate on a birthday? It's just a blessing to be in good health and to have family and friends around," she adds with a sigh.

Ashaji has a very special reason to celebrate this year: She was presented the prestigious Dadasaheb Phalke Award on September 30.

"I couldn't have hoped for a better birthday present," she says. "It was so nice to receive this special honour from the President of India. She was so warm on stage even if our interaction was for only a few seconds. (Union Minister) Anurag Thakurji was also very warm."

Compliment her on her classy look at the National Awards ceremony and Ashaji laughs. "Oh, the credit goes to Abu Jaani and Sandeep Khosla. The sari was their creation. Otherwise, I have never been too particular about dressing up for occasions."

Didn't she feel that the Dadasaheb Phalke award came too late in her career?

"Der aaye durust aaye, better late than never. I feel any honour coming from the government is to be appreciated. I am indebted to the government for thinking of me for this honour." Looking back at her career, Ashaji says she enjoyed every role that she played.

"There were many big hits. I enjoyed shooting for all. I remember the great time Joy Mukherjee and I had in Japan shooting for Love In Tokyo. Dharmendra and I did several films together. Mera Gaon Mera Desh was the biggest hit. We had a blast shooting that in Rajasthan."

"With Shammi chacha (Kapoor), I did our blockbuster Teesri Manzil. We had so fun until Shammi chacha lost his wife (actress Geeta Bali) during the shooting. I also liked our film Pagla Kahin Ka."

"With Rajesh Khanna, I gave two of my best performances in Baharon Ki Manzil and Kati Patang."

Ashaji looks back at her career with satisfaction: "Shooting was always a picnic. I never had to drag myself out of bed for work. I looked forward to each day of shooting." 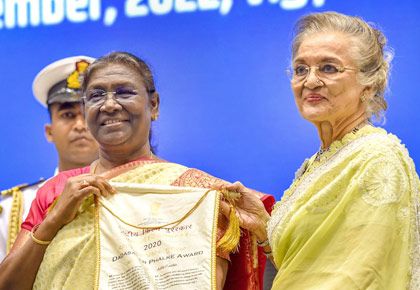