'Today we are standing outside Mannat and we finally feel like jannat (heaven).' 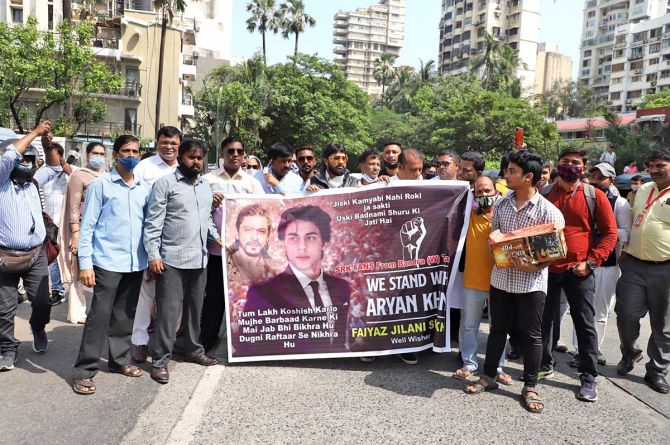 It was the homecoming of their 'prince' Aryan Khan and Shah Rukh Khan's fans made sure to make it special as they thronged in larger numbers outside the actor's bungalow in Bandra, north west Mumbai, celebrating with music, dance and firecrackers.

Aryan walked out of the Arthur Road prison after 22 days in the central Mumbai facility following his arrest during an alleged drug raid on a cruise ship off the Mumbai coast.

He came out of the prison shortly after 11 am, a day after a special court issued his release memo.

As Shah Rukh's convoy arrived at the star's landmark bungalow around 11.33 am, hundreds of fans of the actor gathered to catch a glimpse of the Khan family.

The supporters ran alongside the car, shouting, 'We love Shah Rukh, we love Aryan.'

As soon as Aryan arrived at the bungalow, fans started dancing to the beats of the drums and burst firecrackers.

The police had barricaded the area outside Mannat to control the crowd and the media contingent present. Three police vans and nearly 30 cops were present at the spot.

While the media -- which was camping outside the bungalow throughout Aryan's arrest earlier this month -- started arriving as early as 5 am, fans slowly started to trickle in.

A majority of them turned up after Shah Rukh's convoy left around 8 am from his residence. 'Welcome home Aryan Khan. Stay strong prince Aryan. Everything will be alright soon,' read a banner by a group of fans who arrived at the actor's Bandra residence early in the morning.

"Today we are standing outside Mannat and we finally feel like jannat (heaven). It was a tough time, but Shah Rukh and the family have sailed through it," a fan said.

Kavita, who had come to Bandra to support her favourite actor before going for a job interview at a corporate firm, said it was important for her to 'witness the moment'.

"It's an emotional moment. I have my job interview later in the afternoon, but I timed my visit here in a way that I get to witness the moment and be a part of the community that is Shah Rukh Khan fans. We are with him always," she said.

Fans across all ages, children, college students and even elderly couples showed up to celebrate Aryan's return to his home.

The lane to Mannat's entrance was jam-packed with crowds.

Police and Shah Rukh's private security had to clear the area for the car to move smoothly.

Even after the actor's convoy went inside the bungalow, many fans waited in the hope that Shah Rukh might wave to the eager supporters, as he does annually on his birthday.

Among all the fans present, was also a Baba, who, in the morning, sat outside the gate of Mannat to pray for Aryan and "the youth of Maharashtra so that they don't fall into the trap of drug addiction." 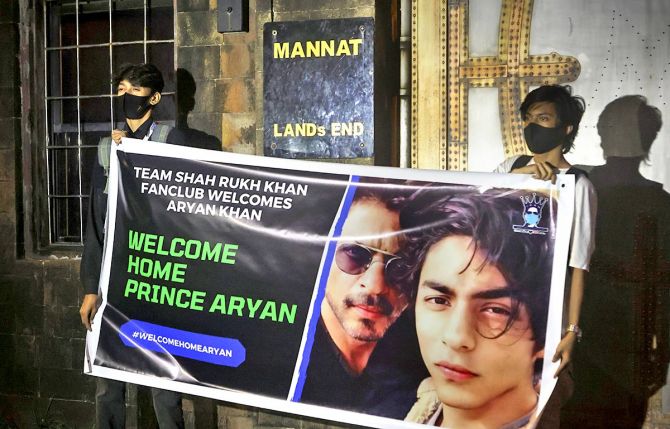 The Bombay high court had granted bail to Aryan, 25 days after he was arrested during an alleged drug raid on a cruise ship off the Mumbai coast on October 3.

He was earlier denied bail by the special sessions court in Mumbai that heard the case.

In the five-page order, the high court said that Aryan and and two co-accused Arbaaz Merchant and Munmun Dhamecha, who were also granted bail, shall be released on a personal bond of Rs 1 lakh each with one or two sureties of the same amount.

The National Crime Bureau had alleged that Aryan was part of an international drug conspiracy, based on his WhatsApp chats, and that he would tamper with evidence if let out on bail. 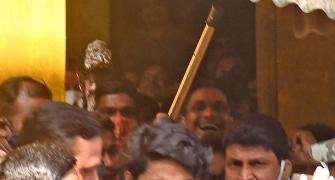 Aryan Khan walks out of jail 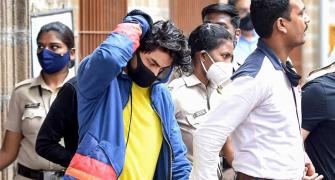 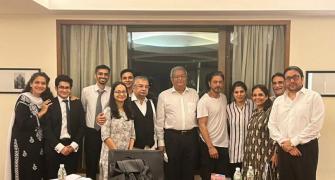 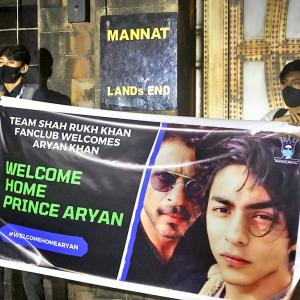 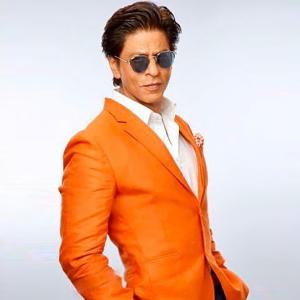