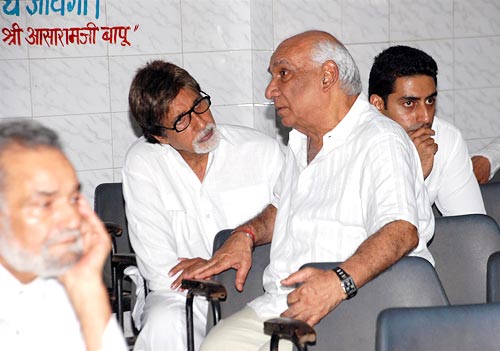 Amitabh Bachchan, who worked in memorable Yash Chopra films like Kabhi Kabhie and Silsila, paid a moving tribute to the veteran filmmaker in his latest blog post.

The legendary actor, who'd known Chopra for over forty years and last met him during his birthday celebrations earlier this month, reminisced about the precious moments he spent in the late filmmaker's company as he paid him one last visit at the Yash Raj Studio in Andheri, a western Mumbai suburb.

We present some excerpts here:

"An association of 44 years abruptly comes to an end. He went away too soon and too suddenly. He deserved to be with us longer. Yash Chopra, a friend first, a creative legend later, has passed away this evening in the late hours."

He further wrote, "As I sit beside his still and flower decked body in his studio within the portals of the large common patio, there does not pass a moment when all that we shared flashes by. This colossal studio that he built after years of hard work and labor, shall for the next day house his last physical remain. I doubt if he had ever dreamt that this unique and most distinguished facility would find space to accomodate him in the state that we see him today."

Bachchan, who had had a long association with Chopra, mentioned that he regretted not spending much time with him in his later years.

He wrote, "I have just one regret with regard to him. For some months lately, he had been calling and telling me to drop by in the early hours of the morning as I returned from the gym for 'just a chat - no work, no issues, just a chat'. I had promised him that I would, and I never was able to.

"As I sit back in his remembrance I wonder if this was another premonition that he may have had of his departure. Of his limited time "

The Big B also looked back at the legendary director's journey from working with his older brother B R Chopra to setting up his now famous YRF studio.

The actor's parting words for Yash Chopra would resonate with millions of Yash Chopra fans around the world.

He wrote, "Yash ji, your contribution to the millions that had the privilege to witness your creativity shall be immortal  may we all savour it till our end "

Photograph: Pradeep Bandekar Click on NEXT to read further...