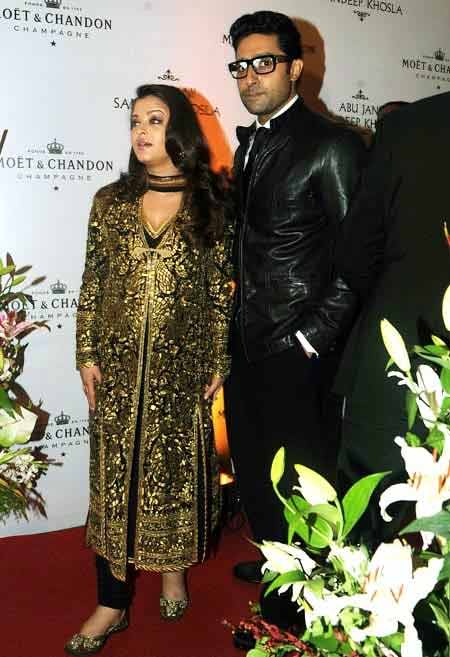 Aishwarya Rai Bachchan and Abhishek Bachchan have become proud parents of a baby girl. The actress gave birth to a girl this morning at the Seven Hills hospital in Andheri, a western Mumbai suburb.

The 38-year-old actress developed labour pains around 4 am and was rushed to the labour room where the delivery took place after nearly six hours.

Hospital sources said the delivery was normal and that mother and daughter were both doing fine.

Ash was accompanied to the hospital by her parents Vrinda and Krishnaraj Rai, brother Aditya, husband Abhishek and in-laws Amitabh, Jaya and Shweta Nanda.

Close friends Sonali Bendre and husband Goldie Behl were among the first to visit Ash, and congratulate the family. Behl is a childhood friend of Abhishek, and also directed him in Drona.

Amar Singh also paid a visit to the Bachchans.

The news of Ash's pregnancy was broken by Amitabh Bachchan through Twitter in June this year. As Bollywood's first family  and their well-wishers celebrated the Big B received over 2,000 congratulatory tweets the same day and people thronged the Bachchan residence in Juhu to celebrate.

The Bachchans chose a suburban hospital for the delivery, presumably to avoid media glare. While TV news channels, on their part, had agreed to stay away from the developments, the Information and Broadcasting Ministry had ordered television media not to park their vans outside the hospital.

Bachchan was questioned about having asked the I&B ministry to intervene in the matter. To which, he replied: 'HaHa ! Print MidDay asking if I have told I&B Ministry to block media news of Aish delivery ! Absolute rubbish ! Good try MDay ! &B

and media matter ! Firstly I have no such intention ever, secondly do you really think I&B would listen to me !?? No way baby !'

Ash and Abhishek got together during the filming of Guru and got married in a glitzy ceremony in 2007 in the presence of the family's closest friends and associates. Amitabh and Jaya Bachchan are also grandparents to daughter Shweta Nanda's two kids -- daughter Navya Naveli and son Agastya.

Here's wishing the proud parents a happy life ahead with their bundle of joy!

Wish Aishwarya and Abhishek with us!

PIX: The many faces of Aishwarya Rai          Photograph: Pradeep Bandekar