News
Business
Movies
Sports
Cricket
Get Ahead
Money Tips
Shopping
Sign in  |  Create a Rediffmail account
Rediff.com  » Movies » After 10 years away, Fardeen is back in Bollywood

'We thought we'd be away from Mumbai for two or three years.'
'If only life were that simple!' Fardeen Khan is all set to make a comeback to Bollywood.

The actor, who was last seen in the 2010 film Dulha Mil Gaya, was recently spotted at casting director Mukesh Chhabra's office

"I never thought I'd be away for so long." Fardeen tells Subhash K Jha.

You've been completely off the radar, and now you planning a comeback?

Yes, I've been away.

And yes, I am planning to return to cinema.

This is such an exciting time to be working again, don't you think?

Indian cinema has evolved so much. I guess it was long overdue.

Technological advancement is a part of that growing process.

Whatever the reason, the maturity and diversity in the kind of films being made is definitely something to be happy about. What kept you away for so long?

I never thought I'd be away for so long.

Initially, my wife Natasha and I had to move to London because we were having challenges in having children.

Each time there was a bundle of joy in the house, it just took over our lives.

I didn't even know how time flew by.

Because we had chosen the IVF route, it wasn't easy for Natasha. I had to be by her side.

So time just flew by?

Initially, we thought we'd be away from Mumbai for two or three years.

If only life were that simple!

Being away wasn't planned, I was dealing with circumstances.

Now I am blessed with two beautiful children.

And the time I've spent with them away from work has been so beautiful.

I count my blessings every day.

Now I see the children a little more settled, so I feel it's time for me to get back to work.

Having returned, I find the entire landscape of the film industry has changed. Are you back for good now?

I have always been going back and forth between Mumbai and London.

This time, I'm back with a purpose.

I want to do meaningful work.

This is the new golden age of cinema. It's encouraging to see such a diversity of cinema happening.

Recently there was some publicity over a picture that someone clicked.

You mean the body-shaming over your weight?

That's a closed chapter in my life. It happened when it had to happen.

I was never aggressively active on social media.

That was a shocking introduction.

Everyone is learning how useful or damaging it can be.

I think we're all on the learning curve regarding social media.

We just have to be responsible with it. Is your family with you in Mumbai?

No, my children have school in London.

My daughter is seven, so all our decisions have to be according to her school calendar.

The move to Mumbai will have to be next June.

I am heading back to London for the holidays and will be back in January.

I've been in Mumbai for a month now.

The response has been very encouraging. It's heartwarming that people still remember me after 10 years.

I am exploring the new landscape in our film industry. The old landscape is being re-defined. Work ethics have transformed.

With all these new movie-making platforms, it's all very exciting and new to me.

Have you been in touch with friends like Ram Gopal Varma?

I have had a few interactions on the phone.

With COVID-19, I have to be careful because I've my mother living next door to me in Mumbai. So you are determined to return?

I am up for all challenges.

Of course, I've years of experience behind me, and the older you grow the wiser you get.

But my mindset is that of a newcomer.

I feel I am just starting out.

I am not coming back with any assumptions or any sense of entitlement.

I just want to do good work.

The new platforms have made our cinema relevant and progressive. We are such a rich country.

India and the US are the two biggest experimental democracies of the world. There is so many stories to tell in these two countries.

I can see your father (actor-film-maker Feroz Khan) smiling down on your enthusiasm?

Well, yes. I have his blessings and hopefully some of his experience. 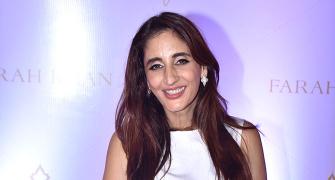 Fardeen is back!
'I'm short on luck but why should I give up?
Feroz Khan: India's Clint Eastwood

'Marriage is about space and respect'

'Acting can be quite bizarre'