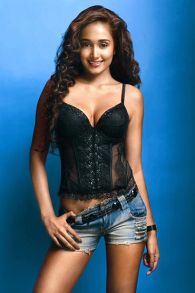 According to the police her maid, watchman and neighbours are being interrogated to find out her last visitors.

Jiah made her acting debut in the controversial Ram Gopal Varma film Nishabd where she acted opposite Amitabh Bachchan.

Upon its release in March 2007, the film received mixed reviews, but Jiah was noted for her confidence, attitude, and sex appeal.
She also got a Filmfare Best Debutant Nomination.

She then appeared alongside Aamir Khan in A R Murugadoss's Ghajini,

the Hindi remake of the director's own Tamil film of the same name.

Later she appeared as a supporting actress in Sajid Khan's multistarrer comedy film Housefull  in 2010. This was her last film.

Jiah's mother and sister had gone out and she was alone at the house when the incident happened, police said.

"Jiah's mother and sister found her hanging when they returned at around 11 PM," police said, adding that Jiah used her own dupatta to hang herself.

Police said postmortem of the body will be conducted today and they have registered a case of accidental death.

Police are yet to record the statement of the actress' mother as she is in shock.
© Copyright 2021 PTI. All rights reserved. Republication or redistribution of PTI content, including by framing or similar means, is expressly prohibited without the prior written consent.