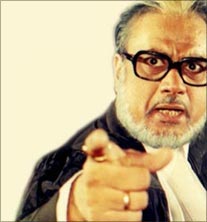 Veteran theatre actor-director Dinesh Thakur, known for his character roles in Hindi films of the 1970s, passed away in Mumbai after prolonged illness.

Thakur was suffering from kidney ailments and died at a suburban Andheri hospital, family sources said. He was 65.

He is survived by actor-wife Prita Mathur.

Thakur has several acclaimed films like Mere Apne, Rajanigandha and Ghar to his credit. He headed a theatre group called ANK Productions for the last three decades. His oldest and still popular theatre production is Jis Lahore Nahi Dekhya.

Thakur had showcased his play Rang Bajrang at the Prithvi and Tata theatres in April last year.

He was a noted Indian theatre director, actor in theatre, television and Hindi films, where most notably he appeared as one of the leads in Rajnigandha (1974) directed by Basu Chatterjee, which won both Filmfare Best Movie Award and the Filmfare Critics Award for Best Movie.

He appeared in character roles in Hindi films and also was a screenwriter and story writer. He is known for writing the story and screenplay of Ghar (1978), which won him the 1979 Filmfare Best Story Award.

Thakur's last rites will be conducted at the Oshiwara crematorium at 4.30 pm on September 20.