'The majority of the audience knows me. My relationship with them is of over 27 years. The people who questioned me are already biased against me; they will question no matter what I do. I don’t react to that.'

'The important thing is not to be negative.' 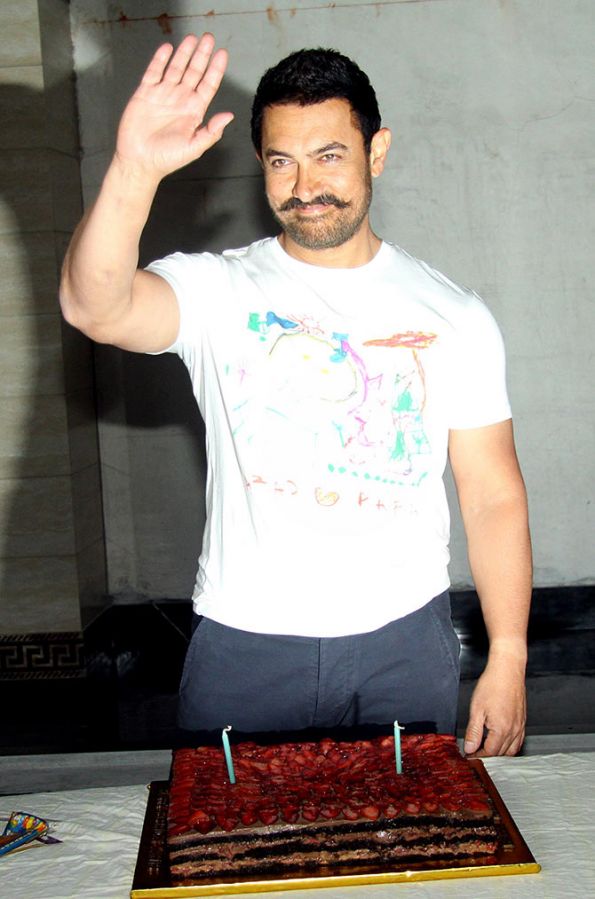 "My biggest wish this year is not Dangal’s success. My mother is 82 years old, and I want to buy the house in Banaras where she spent her childhood," Aamir Khan told the media assembled outside his Bandra home, in Mumbai's posh suburb, on his 51st birthday on March 14.

Aamir wants his mother to relive her childhood days.

"I want to my mother to go back to her childhood and enjoy those days," Aamir added. "My mother spent her childhood in Banaras. I had visited the place sometime ago and seen the house. If I could request the people staying there currently and buy that house for her, I’d be very glad.”

Aamir has been very busy on his birthday. In fact, he did not sleep at all the night before, as he was travelling back from the US and the flight landed in the early hours of dawn.

"Azad has made this drawing (pointing to his T-shirt), and Kiran printed it on a T-shirt for me," the proud father said.

The actor will spend his birthday evening with his entire family, including brother Faisal and sisters Nikhat and Farhat, at his mother's home.

Aamir had gained a lot of weight for his character in Dangal but has been reducing the kilos now.

"My weight was 95 kilos. The part in Dangal where I'm supposed to be fat has been shot. So I started losing weight and now I weigh 82 kilos. I still have to lose 12 kilos," he explained.

Aamir’s aim is to get back his Ghajini look.

"Sushil Kumarji’s look is very muscular with low body fat, just like the Ghajini look. I’m halfway there," he said, referring to the wrestler who helped him acquire his look in the film. 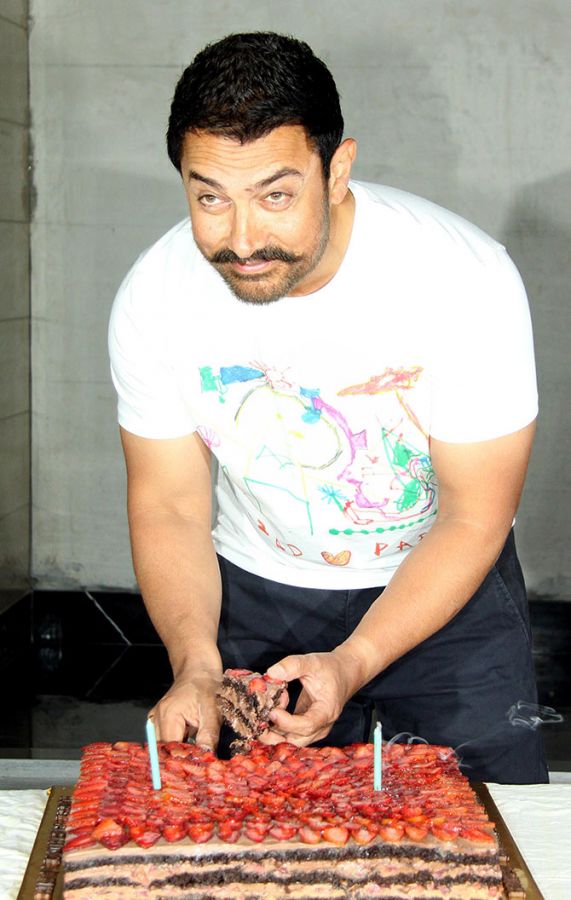 Aamir, who is on a vegan diet, admitted that losing weight was not easy at all.

"For most people, it’s easy to put on weight but it's difficult to lose weight and the body fat percentage," he said.

"My family is happy that I’m losing weight but it’s a concern too. Losing weight fast isn’t healthy. I am pushing the envelope a little bit, for professional reasons. I was in the US for the last three weeks, to lose weight. I was working out in different ways, about six-seven hours everyday. I was trekking, biking, mountain biking, playing tennis, swimming and doing weight training. I was only sleeping, eating and working out. I'm feeling much better now that I'm losing weight," he added.

"As I am learning wrestling, I am realising that it’s a very beautiful sport. The best thing is that you do not injure your opponent, you defeat him. It’s a sport that has a lot of mind play and strategy," he said.

Aamir is keeping his options open for his second look of Dangal, and that's why is growing his moustache and beard. “I don’t know what my final look in the film will be. We will decide that a week before the shoot. I'm growing my beard and moustache to keep the options open,” he explained.

Aamir is not worried about the fact that Salman Khan is also making a film on wrestling, called Sultan.

"Themes never get old; love stories will always remain fresh," he reasoned. "A film has to connect with people. Wrestling is an ancient sport. It's great to have two films on wrestling, it will give a boost to the sport in India."

In spite of being in the industry for more than two decades, Aamir still has a list of characters he wants to play on screen. "I like Karna and Krishna from Mahabharata a lot," he picked.

Will we see another season of his popular television show, Satyamev Jayate?

"The team of Satyamev Jayate are involved in a very important cause: the water crisis in Maharashtra. We have been working on this for a year, and the entire team is spread out in different villages of Maharashtra. We’re working on ground and we will do this for the next four-five years," he said. Due to this water shortage, Aamir has asked people to play dry Holi.

"I was born on Holi. This year, I would like to request people to use less water to play Holi. If they don’t use water at all, nothing like it. Let’s have a dry Holi and value water," he said.

A lot of people have questioned at him about intolerance, and he's still being asked about it. Aamir said he believes in not reacting to it.

“The majority of the audience knows me. My relationship with them is of over 27 years. The people who questioned me are already biased against me; they will question no matter what I do. I don’t react to that. No matter who you are or what you do in life, people will doubt you. The important thing is not to be negative. You must be aware about what you’re doing, your conscience should be clear," he stated.