Urvi Malvania reports on Disney India's year of ups and downs and the films that saved the studio. IMAGE: Not only is Dangal the highest collecting Bollywood film ever, it is also the most profitable film of the year.

With the film Dangal, which it produced having broken all manner of records and still continuing a good run at the domestic box office, Disney India can finally breathe easy.

The Aamir Khan starrer, along with The Jungle Book earlier in 2016, have enabled the studio to offset some of the losses it incurred after some of its bigger Bollywood bets failed to perform well at the box office. At Rs 357 crore so far in India collections, Dangal is the highest collecting Bollywood film ever.

More important, thanks to a comparatively rationalised cost (production plus distribution, advertising and promotions) of Rs 90 crore, it is also the most profitable film of the year.

Amrita Pandey, vice-president, studios, at Disney India, says, "The movie has connected with the audience on an emotional and inspirational level. Rarely have we seen such consistent performance across various urban and mass markets. Even the Tamil-dubbed performance has been superlative. The movie has busted multiple myths -- starting with women-oriented stories having a limited appeal, to heroes can't age in movies, to movies with rustic backdrops and shot in villages might not perform too well, to myths about the language barrier with the Haryanvi accent and many more."

The distribution strategy was to be present across theatres and markets, with Tamil and Telugu dubs for Andhra Pradesh, Telangana and Tamil Nadu. As a result, Dangal has also made a new record as the highest-grossing movie in dubbed Tamil.

This big success could not have come at a better time for Disney India. Starting with Tamasha in 2015, bets placed on big Bollywood films by the studio seemed to go consistently awry. The streak continued into 2016, with Saala Khadoos failing to impress in collections, followed by Fitoor and then Mohenjo Daro. The estimated losses from these are estimated at Rs 125-140 crore (losses borne by the producers). IMAGE: The Jungle Book is the most successful Hollywood film in India.

At Rs 190 crore, The Jungle Book is currently the most successful Hollywood film in India. Of the total revenue, almost Rs 110 crore came from the regional and Hindi dubs. The movie, directed by John Favreau (of Chef and Ironman fame) beat Furious 7 during its run at the box office and set the benchmark for Hollywood films pretty high.

Apart from Mowgli's adventures, the face-off between Captain America and Ironman in Marvel's Captain America: Civil War got audiences thronging the theatres, resulting in almost Rs 60 crore in collections for the final instalment in the Captain America series. Other Hollywood titles Zootopia, Moana and Finding Dory also did well for Disney in India. Estimated profit from the Hollywood ventures is around Rs 90 crore.

"The advantage of having a robust slate of Bollywood and Hollywood films is that there is always a chance to catch up and even things out. For Disney India, this came in the form of two very big successes, accompanied by a spate of moderately successful Hollywood films. The Jungle Book and Dangal have definitely ensured the studio starts its hiatus from Bollywood on a good note," says a trade expert.

Combining the profit from the successful Hollywood titles and Dangal (Rs 89 crore profit for producers as of Tuesday), the House of Mouse finds itself in the black once again.

Hollywood movies like The Jungle Book and Civil War are comparatively low-cost ventures and have high revenue potential mainly because they allow higher ticket pricing, thanks to 3D and IMAX prints. This means the margins from Hollywood films can be significantly more if the movie manages to do well. 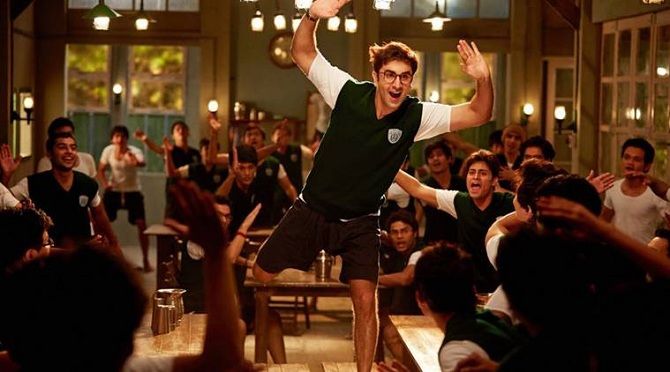 IMAGE: Jagga Jasoos's release in April will be the last from Disney India for the time being.

It will, however, continue distributing Hollywood films in India. The 2017 slate for Disney India includes Thor: Ragnorak (third and final instalment in the Thor franchise), Cars 3, Guardians of the Galaxy Volume 2 (also part of the Marvel Cinematic Universe), live action version of The Beauty and The Beast, starring Emma Watson and Dan Stevens, and Star Wars: Episode VIII.