Aamir Khan has a present for you on his 54th birthday.

He invited the media to his Mumbai home and announced that his next project will be an official adaptation of the Tom Hanks classic Forrest Gump.

The Hindi adaptation will be titled Lal Singh Chaddha and he will co-produce it with Viacom18 Motion Pictures.

It will be directed by Advait Chandan, who made Secret Superstar.

"We have bought the rights from Paramount... I am playing the lead role of Lal Singh," Aamir said. 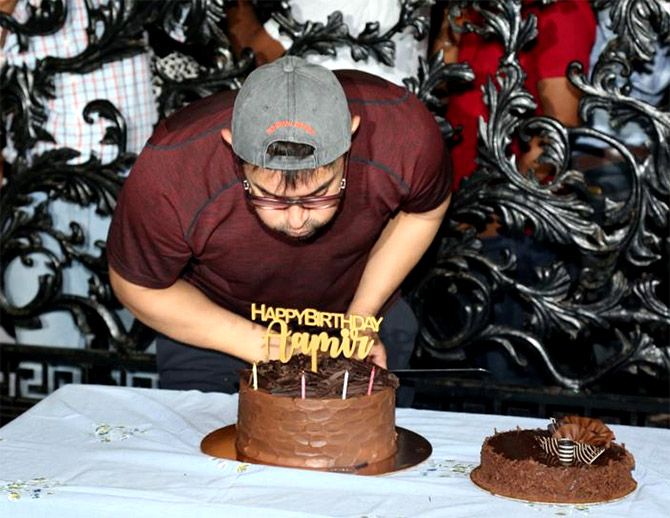 The film is based on Winston Groom's 1986 novel of the same name, and follows Forrest Gump, a dim-witted man from Alabama, who witnesses and unwittingly influences several historical events in 20th century USA. Aamir said the makers are yet to lock the cast for the film.

"We have started the prep work on the film. The shoot will start from October. I will be prepping for six months. I have to lose weight. I will be losing 20 kgs. I have to be lean and slim," Aamir says.

"I have always loved Forrest Gump as a script. It is a wonderful story about this character. It is a life affirming story. It is a feel good film, a film for the whole family," Aamir adds.

The actor reveals he will sport a turban 'for some part of the film'. The adaptation of Forrest Gump has been written by actor Atul Kulkarni who shared the idea when they were shooting Rang De Basanti.

Aamir heard the story after two years and loved it. Since that day, eight years ao, he has been trying to acquire the film's official rights.

The actor said the late photographer Gautam Rajadakshya had told him in the 1990s that many people in Los Angeles considered Aamir as Tom Hanks when he shared pictures of him.

"Many people compare me with Tom Hanks, but I don't feel so," Aamir says.

Aamir started his birthday with son Azad's match whose team won the final. "It's the best gift," the proud father declares.

Wife Kiran gifted him a portrait of Aamir created by Azad and Kiran. Kiran once told Aamir that though he he loves his family, they appear on the periphery of his life because of his tiring schedules.

After hearing what Kiran said, Aamir now comes home early in the evening and dedicates 6 pm to 8 pm for quality time with Azad and Kiran.

Aamir will test Azad's look for the Forest Gump remake as the original featured a cameo of Tom Hanks's children in it.