'The tweet validated the insanity, that she could believe I would bribe someone.'
'I felt that's it. It's over. And she can never come back to my life.' 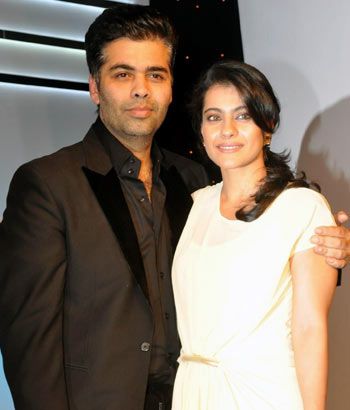 Karan Johar says his 25-year-long friendship with Kajol ended over her one word tweet supporting husband Ajay Devgn's allegations against the director during the box office clash of Ae Dil Hai Mushkil and Shivaay.

Devgn went public with a recorded conversation with self-proclaimed film critic Kamaal R Khan, who allegedly said he was paid Rs 25 lakhs by Johar to write favourably about the Ranbir Kapoor-Anushka Sharma starrer.

Devgn demanded an investigation into the matter and Kajol came out in her husband's support by tweeting, 'Shocked.'

Writing about the moment in his book The Unsuitable Boy, Johar says her tweet was the final straw for him.

'Prior to the release of Ae Dil Hai Mushkil, there's a lot that happened. Things were said, crazy accusations were made against me, that I had bribed someone to sabotage her husband's film. I can't even say that I was hurt or pained by it. I just wanted to blank it out.'

'When she reacted to the whole situation, and put out a tweet saying, 'Shocked!' that's when I knew it was completely over for me. The tweet validated the insanity, that she could believe I would bribe someone. I felt that's it. It's over. And she can never come back to my life. I don't think she wants to either,' Johar writes in the book.

Kajol was the lead in the director's debut film Kuch Kuch Hota Hai.

They later went on to work in Kabhi Khushi Kabhie Gham and My Name Is Khan.

Johar considered her his lucky charm with the actress making an appearance in most of his films prior to Ae Dil...

Johar says he never had a problem with Kajol, but he did not exactly share a good equation with her husband.

'The problem was actually never between her and me. It was between her husband and me, something which only she knows about, he knows about, and I know about. I want to keep it at that. I don't really want to say what transpired. But I did feel that she needed to apologise for something she didn't do.'

The director says the end of his friendship still hurts him and it bothers him that he and Kajol share common friends.

'I wouldn't want to give a piece of myself to her at all because she's killed every bit of emotion I had for her for 25 years. I don't think she deserves me. I feel nothing for her anymore...'

Johar says despite problems, there was still a part of him which hoped that they would go back to what they shared until her tweet.

'...that one-word tweet that she put out-that was the most humiliating thing she could have done for a person who loved her deeply. That broke me.'

While Kajol has not spoken publicly about the fall-out, Ajay told PTI in October last year that things between Kajol and Johar were not as warm as before.

'I am not friends with him (Karan). Even Kajol's equation is not as warm as it was. It is a personal issue... not due to any professional thing. It's a personal hurtful feeling. It has nothing to do with the clash,' Devgn had said.