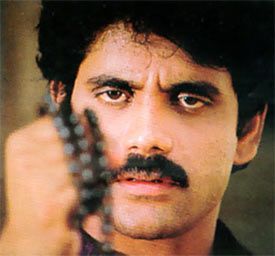 Shiva, Ram Gopal Varma’s first film, has completed 25 years.  Originally made in Telugu in 1989, Shiva was later remade in Hindi in 1990.

The raw energy of the film, Ilaiyaraja’s mesmerising music, Raghuvaran’s acting, the pairing of Nagarjuna and Amala and the realistic portrayal of the mafia in college politics, made the film a blockbuster. Shiva is considered a cult classic today.

An event was organised to celebrate the 25 years of Shiva at Annapoorna Seven Acres studio. Most of the people associated with the film were present.

A documentary, 25 years of Shiva, made by lyricist-writer Sirasri, was made for this special occasion. A 12-minute version was screened at the event and uploaded on You Tube.

The documentary featured major directors of Telugu cinema today such as Puri Jagannadh, Rajamouli, VV Vinayak, and Vikram Kumar talking about the impact the film had on them. The cast and crew went on a nostalgia trip, reminiscing about the shooting of the film.

Later all those present on stage shared their memories of the film.

Ram Gopal Varma began by saying “Many contributed to the film. The vision I had was enhanced by people. People say I broke rules but I didn’t know them to break! Nag trusted my passion, sincerity and intensity. There was no benchmark, no measurement factor for Shiva. We didn’t realise it would be a hit. Truthfulness and passion resulted.”

There were quite a few who didn’t believe in Shiva. Ram Gopal Varma ended by saying, “If nobody intended then, how did it happen. George Bernard Shaw said ‘Great things happen. I think it fell down from nowhere!”

Nagarjuna said, “Shiva changed my life personally and my career too. I can’t explain how (it was during this film that cupid struck both Nag and Amala in real life too and they married later!). I enjoyed every moment of the film. I feel happy about it.”

“It’s like a good dream. One feels happy when one has a good dream. It is wonderful to see the team together. We were all friends working together,” said Amala.

A digitally re-mastered Shiva will shortly be re-released in theatres some time in November informed Nagarjuna at the end of the programme.