It's been 19 years since that time when Karan Johar reminded us to love our parents.

Yes, it's been 19 years of his film, Kabhi Khushi Kabhie Gham, and Kajol took to Instagram to post a collage of her funny expressions in the film.

The clip made us go down memory lane, as we remembered her lighter moments in the film, especially her cute chemistry with her onscreen husband Shah Rukh Khan.

Perfect time then, to revisit the film through these images that capture its essence.

The scene when Shah Rukh is introduced in the film, when his mother Jaya Bachchan can 'sense' that he has come home, has given birth to a series to hilarious memes.

K3G is full of dramatic entrances, and Hrithik Roshan knows how to ace his as well.

Kajol's chemistry with Shah Rukh has always been good, but it's probably one of the best parts of K3G.

Rani Mukerji puts in an appearance, while SRK tries to prove his matchstick trick is better than the other Khan, who wanted to take a trip to Khandala.

Shah Rukh's onscreen father Amitabh Bachchan reminds us that he can still rock the dance floor.

But it's Kareena Kapoor -- or Poo -- who grabs our attention through the film.

That is, of course, until Karan Johar reminds us again -- It's all about loving your parents, not Poo! 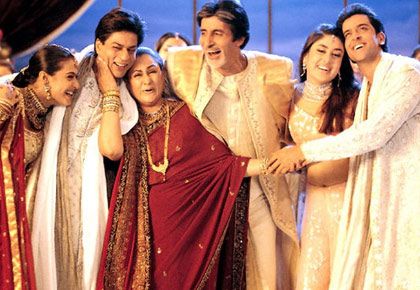