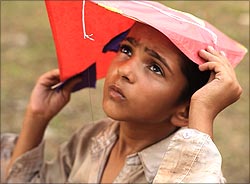 This year's Berlin International Film Festival featured only two Indian films. The first was Don 2, because Shah Rukh Khan has a huge following in Germany.

The other film, Gattu, was shown in the Generation section -- catered mostly for families with young and teenage children.

Directed by Rajan Khosa (Dance of the Wind, 1977) and co-written with Ankur Tewari (director, writer and musician in a Mumbai-based band called Ankur the Ghalat Family), Gattu is a heartwarming tale of a nine-year-old orphan who lives to fly kites.

Gattu, played by Mohammad Samad, makes an elaborate plan to enter a school so he can fly kites from its roof.

The film was a tremendous success at Berlinale, playing to a couple of thousand schools kids and adults in some of Berlin's largest theatres. It opens in theatres this Friday.

Khosa and Tewari tell Aseem Chhabra about what went into making a children's film.

Why a children's film?

Rajan Khosa: We weren't really making a children's film. It so happens that the protagonist is nine. We were making a film for everyone, a family film. And we know that kids come with parents. So, we wanted the film to appeal to all ages.

Why set it in Roorkee, Uttarakhand?

RK: Ankur grew up there.

So, you were familiar with the kite flying tradition there?

Ankur Tewari: The kite flying tradition is all over north India. I have flown so many kites in my childhood. When Rajan came to me with the premise, we talked about keeping the film within budget. I suggested we set it in Roorkee, since I know the city very well. And with my family (his father is a professor at the Indian Institute of Technology there) being there, one could also get logistical support. It is a small place where one knows everyone.

How was the kite flying element added to the story?

RK: Initially, the story was written by a writer who didn't have access to education. He had dreams that one day he would be able to attend the school. His name is Satyam. Nandita Das (who heads the Children's Film Society in India, the producer of the film) brought the story to me. That was the core story, but not a screenplay. Ankur and I brought in the kite flying, gave it a purpose, structure. 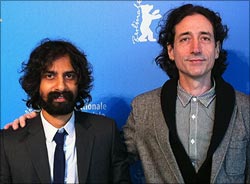 What I like about the film is that while there is a message about education, it is not preachy...

AT: That was very important when we were discussing the project in the initial phases of writing. Rajan and I talked about what the school would be like... I always used to say that I went to school not for education, but to meet friends and have a good time.

So, we knew from the very beginning that we weren't making a film saying you should get education. But it should happen when the character doesn't realise.

RK: We had a fourth writer Dilip Shukla, who wrote Dabangg.

AT: Rajan was very clear that the flavour Dilip brought in should have an earthy element, not the cheap dialogues, which is common in mainstream Bollywood films that lack a good story. Dilip also wrote the dialogues for Andaz Apna Apna, Damini, Ghayal and Mohra.

One of things I was concerned about while watching the film with the German kids was how in India adults sometime hit children or punish them by pulling their ears, or say kind of abusive things. This is not done in the West.

RK: I was concerned about that, too. The other day one kid asked, 'Why were they holding their ears?'

AT: I was concerned; I didn't want to project India in a certain way. Like today there was a question about why there is poverty in India. And the thing is that here everything is measured in terms of money. But if you go to India, you will see that the street kids are sometimes the happiest people.

Yes, and I noticed that your response was they may be poor, but they are rich in their dreams. So, how did you go about casting the film? Are there any professional actors?

RK: Ninety percent are locals who had never acted before.

AT: My mom is in the film. She plays the Hindi teacher. She's been teaching Hindi for 29 years. The whole idea was if we are making a film in Roorkee then we should make it a family affair and use all the resources.

RK: And the school we shot is where Samad studies and those are all his friends. The locals kept saying to us, 'Hamare ghar main shoot kar lo (Shoot in our homes).'

How did you cast Mohammad as Gattu?

RK: We visited most of the schools in Roorkee and auditioned many kids. It was a two-month process.

What were you looking for in Gattu's character?

RK: When we started the process, Gattu was supposed to be a very reticent, seething character. But when I went in search of the actor, I found this kid -- he was mischievous, a brat. He would fly kites, and he reminded me of my childhood. He was so smart.

During the shoot, he would say that the script was fine, but each day he wanted one dialogue of his own. So, he had to be given the right to improvise and the first shot would be his own improvised dialogue. Then we found a goat. Samad's neighbors were raising it, but he would go feed the goat milk every day. So, we added that in the film. He's the one who named the goat Tiger -- that was not in the script...

I grew up in Old Delhi flying kites, but you cannot shoot a film there. Roorkee was a great representation with innocence on people's faces, of Hindus and Muslims living together without riots.

AT: Roorkee is almost 10 years behind time. There aren't any malls, only one single-screen theatre Neelam, and it has a lot of bed bugs. So, one has to drive to Dehra Dun -- one-and-a-half hours away -- to see a film. Rishkesh is one hour away.

RK: I have had child actors in my previous films. So, it was quite natural. I would play basketball with the kids in their school. We had a cycle rickshaw and would go around town in it. We bonded over flying kites.

AT: Rajan has a child-like quality.

I wonder how the film changed their lives...

RK: For them it was a summer vacation program. I shot it in the summer and it was very hot!

Have the kids seen the film?

RK: Not yet. This is the first time we are screening it, but we plan to take it to Roorkee and play it in the same mohalla (neighborhood). 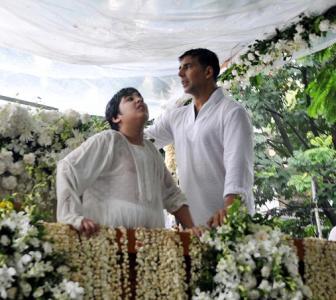 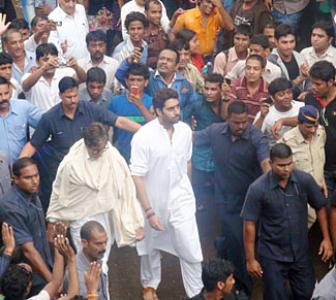 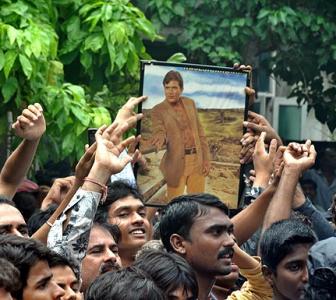 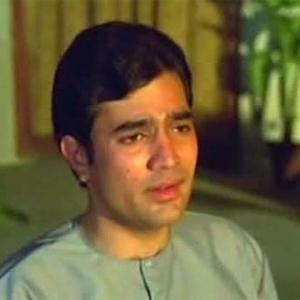