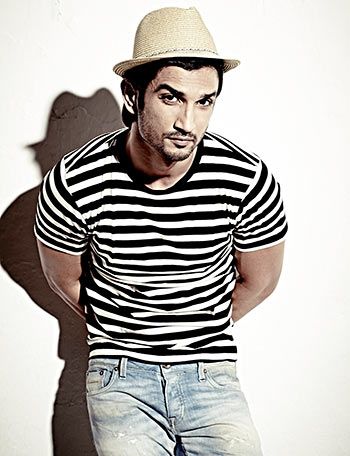 'I don’t know about being superstar, but one day if I become like Shah Rukh Khan, I will not mind that.'

'If I get the kind of films that I really want to do, and if I manage to survive in this industry, I will become somebody like that.'

Sushant Singh Rajput will be seen next in Dibakar Banerjee's Detective Byomkesh Bakshy, where he plays the famous detective.

The shy actor talks about the film, Shah Rukh Khan and his marriage plans, in this interview with Patcy N/ Rediff.com

Have you seen the TV serial Byomkesh Bakshi?

I have, but not as preparation for this film.

I saw it as a kid, so I have a very vague memory of how he carried himself, and the track of the serial,

After I finished shooting for the film, I watched the episodes again.

The character of Byomkesh in the film is very different from the TV serial.

Of course it is. Rajat Kapoor’s Byomkesh always knew who he was and why he was the way he was.

He knew exactly what he was doing and his cases were different in every episode. He developed a very strong, inherent style over the years.

My Bymokesh is fresh out of college; he doesn’t know what to do, is fascinated by everything that is complex, and wants to seek the truth.

He handles a very complicated case that has to do with the underworld, the Americans, the Chinese, and the Japanese and the opium trade.

Gradually, he understands who he is, and then he transforms into a seasoned, mature and level-headed detective.

Did you read the novel by Bengali writer Sharadindu Bandyopadhyay that features Byomkesh?

Yes, I read it before I worked in the film, as homework. I wanted to know everything that he wrote about Byomkesh Bakshy, and the Calcutta of the 1940s.

The character in our film is quite similar to the characterisation of Bakshy in the book.

What is different is the American army, and the opium trade. There was no international angle in the book, but the fact is this did happen in the Calcutta of the 1940s.

The other things that are different is the mode of communication, Dibakar’s grammar and the music, which is very contemporary as we are catering to the youth of today. 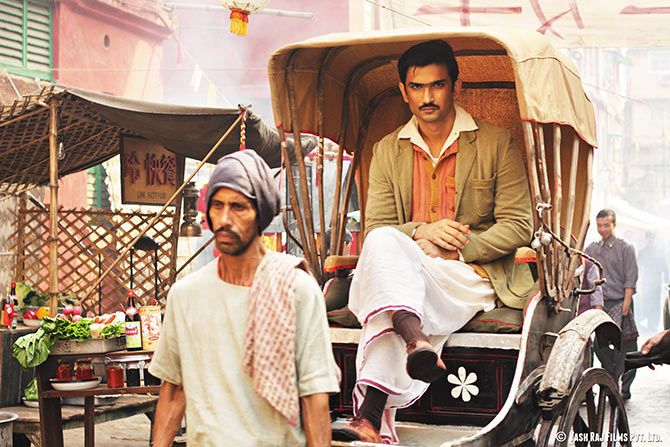 I spent about four or five months preparing for the film. I looked at the history because in the film, when I say my dialogues, I talk about things and I had to know the history behind it.

I learnt about the culture of Calcutta of the 1940s.

I stayed in Calcutta for a couple of months before we started shooting. I had normal, casual interactions with the people out there.

Did you learn the language?

No, there is no Bengali spoken in the film.

It’s like watching Gladiator (which is set in Rome and the language spoken is Latin) in English.

I wanted to learn the language but Dibakar said that we are catering to a Hindi audience so let’s not mix it up.

Speaking in Hindi with a Bengali accent and using one or two Bengali words here and there doesn’t help. 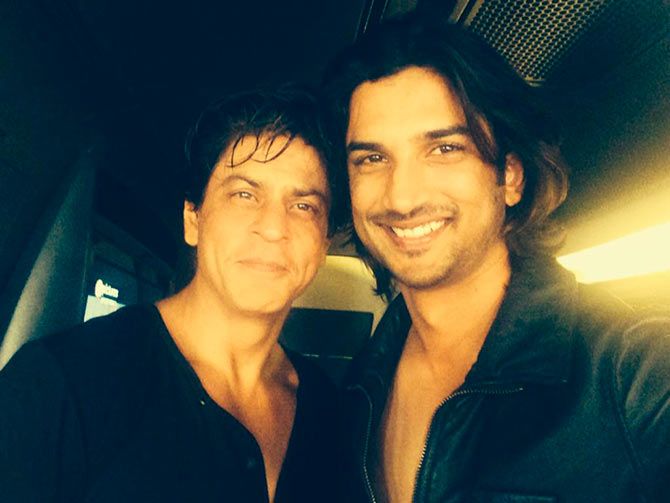 Shah Rukh Khan liked the trailer of the film. Did he tell you that?

We had a great time shooting for the show Sabse Shaana Kaun.

He told me he had seen the trailer of the film and it looked very exciting, it looks of international standard. He said he was waiting for the film to release and after seeing it, he would let me know what he thinks of the film and me.

That was very encouraging. He has always been my idol even before I thought of acting in films.

You are both from a theatre background, you both trained under Barry John, and you both worked in serials before getting into films. Will you be a superstar like him? :)

You forgot we are both from Delhi University.

I don’t know about being superstar, but one day if I become like him, I will not mind that.

I was inspired by the way Shah Rukh carries himself, the energy with which he plays a character.

When I was thinking of becoming an engineer and films were just a source of entertainment, at that time too I would subconsciously behave like him. So, I understood the power an actor, particularly a star, has over the common man.

I understand too that there is a sense of responsibility with that.

If I get the kind of films that I really want to do, and if I manage to survive in this industry, I will become somebody like that.

But you are very shy…

When I am in front of the camera or on stage, I am not me.

When I am not acting or performing, I want to keep quiet and not to have a conversation.

Is that the reason you don’t give that many interviews?

Also, I don’t have the experience to give my personal opinions and thoughts on so many things.

I don’t have opinions. I am still figuring what exactly I want. That is why I don’t give interviews.

I can be questioned about my past and my dreams, I can answer that.

Tell us about the 50 hours of dance rehearsals you did for the song Bachke Bakshy.

I was told by Dibakar that the steps should not look like they were choreographed.

We got Lauren Gottlieb to choreograph the song. To get it to look like it was not choreographed, you have to put in many hours of practise.

We practised for 50 hours over a period of four days. We started  enjoying it so much that we were give two nights to shoot it.

We shot it in one night and mostly in one take.

In what way do you relate to Byomkesh Bakshy?

He is not able to express himself; he keeps lots of things inside. He can’t fit into society. All these things I can relate to.

What happened to your plans of making a film?

Everything that is somehow related to direction and filmmaking fascinates me, like cinematography.

During a shoot, I always talk to the technicians, so I am learning on the job.

All the directors that you have worked with -- Abhishek Kapoor, Raj Kumar Hirani and Maneesh Sharma -- had never seen your television work. Does that make you feel you wasted two years in the television industry?

Dibakar is the only one who had seen my television work.

I was not doing television to get into films. People tell me that television to films is a wonderful, seamless transition, but I’ve never see it like that.

I was as excited playing the role of Manav (Pavitra Rishta) on television, as I was playing Ishaan in my first film (Kai Po Che).

If I get a very good role in television again, I will do it. 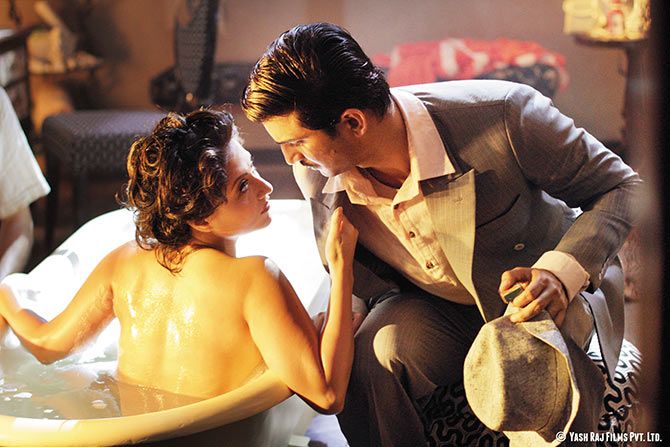 You have a kiss in the film with Swastika Mukherjee that you were not aware of?

Yes, I was not aware of the kiss.

In fact, I was not aware of so many things in the film because Dibakar being the kind of director he is, would give different inputs to different actors so that he got good reactions.

After all, what is acting? It is actually observing, listening and reacting to the situation.

Swastika was told to kiss me and I was told there is no kiss in the scene because Byomkesh was not expecting the kiss.

You said in an interview that had you known there was a kiss in the film, you would have informed your girlfriend Ankita. Is it necessary to inform her about intimate scenes?

It is not necessary, but it is not harmful. Keeping everybody in the loop is good.

It doesn’t create problems; she is immune to it. I kissed so many times in Suddha Desi Romance. 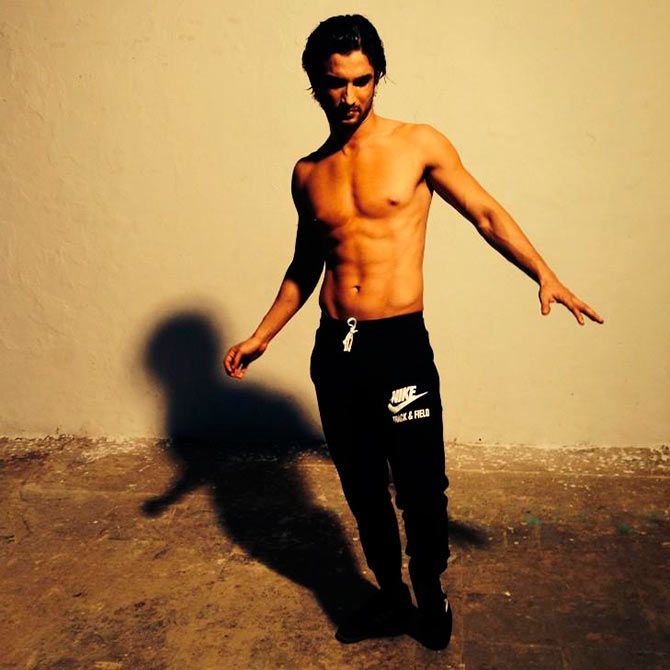 From studying to be an engineer, to dancer, to theatre actor, to television actor, to movies... the transition looks easy, but was it a struggle?

Struggle is there when you want to do something and it is distant and you don’t know how to do it.

It is not the medium.

What do enjoy the most -- television, films or theatre?

I will act in front of the mirror with nobody watching me and I will be just as excited.

When I quit television, people told me, you are doing a filmmaking course but what if you don’t get a film?

I had decided that if that happens, I will start a canteen in Film City and I will buy a camera and make my own short film about the canteen and feature in it too. And I know I would be as excited about that as I am right now.

You said that it’s the story that attracts you, not the money or fame. What do you look for in a story? Why would you do a small role in PK?

Length or duration of the character doesn’t matter to me. That is the first thing that we learn in theatre. There is a saying from Constantin Stanislavski: 'There are no small parts, only small actors.' I believe that.

I am not saying that fame and money do not affect me. They are important. But I don’t work for them, and that’s why I have money and I am famous. 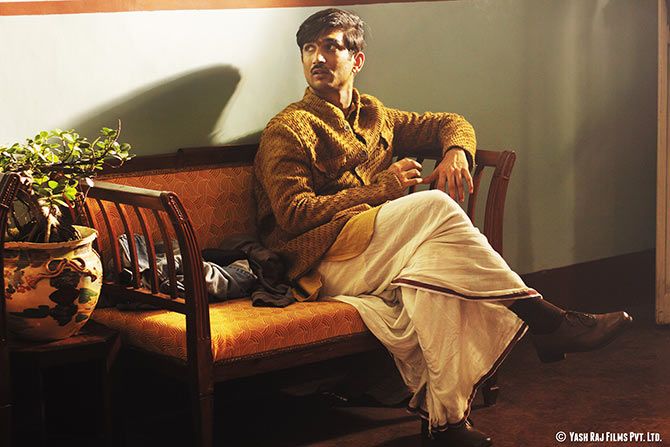 You have worked with Dibakar Banerjee, Abhishek Kapoor, Raj Kumar Hirani and Maneesh Sharma. How are these directors different from each other and what did you learn from each?

All four have a very different approach. Abhishek Kapoor is so passionate; he used to be an actor.

Maneesh Sharma started his career as a director and went to New York University.

Rajkumar Hirani was an editor before.

Dibakar started his career as a designer.

They all have a different point of view, a different way of telling a story and communicating, and that helps me to understand my craft better.

You gave up engineering studies midway. How did your father react? Was there a back-up plan if things didn’t work out?

That is why things worked, because I did not have a back-up plan.

My family told me to get my degree as I had given six semesters and had to do just one more year.

I said I have to drop out right now because I am wasting my time here and because I do not want a degree to fall back on.

But a canteen in Film City would have been plan B?

That was not plan B; that was to spend time in Film City because I love Film City. It’s the only place in Mumbai where everybody is shooting something.

It’s because of the place it is that I thought of opening a canteen there.

I can eat and I can enjoy watching films and I can actually shoot my short film, so that was the place to be. 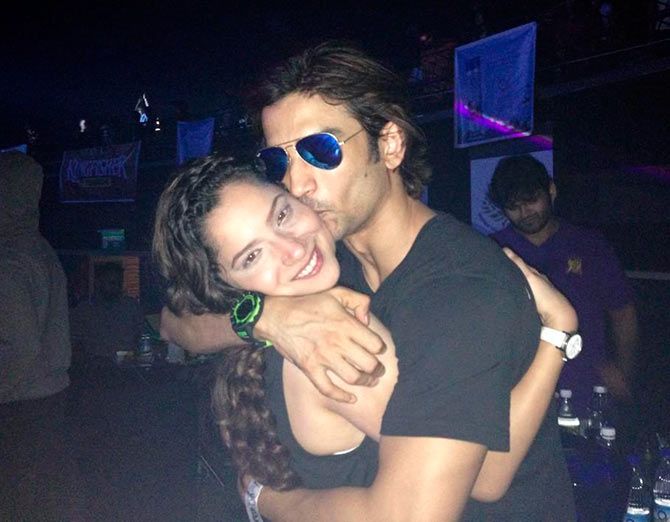 What about Paani? It’s been stalled many times. Are you apprehensive about it?

The last one year I got the opportunity of interacting with Shekhar Kapur (the film’s director). I learnt so much that I don’t expect anything else from Paani.

I can’t control whether Paani happens or not, but through our conversations I learnt a lot from Shekhar Kapur, which is more than enough for me

What about marriage plans? You were to marry Ankita Lokhande this year.

I have a few films to complete and then I will think about marriage.

I don’t know the date and month. But it is going to happen, this year, next year... who is in a hurry?