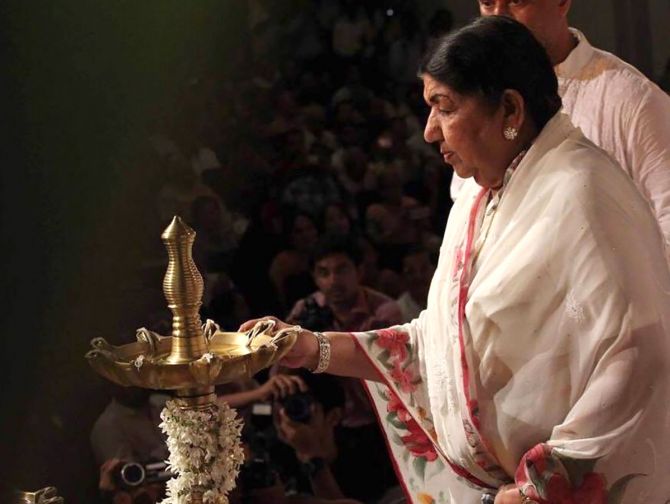 When it came to doing the right thing, Lata Mangeshkar was next to no one in the Hindi film industry. There are innumerable instances of her fearless fights for justice.

Long before she won royalty rights for playback singers, there was an undisclosed incident in Lataji's life where she not only put a male colleague in place, but also refused to sing with him thereafter.

The man in question was playback singer Ghulam Mustafa Durrani, popularly known as G M Durrani, who ruled the world of Hindustani playback singing in the 1930s, 1940s and 1950s and was eventually eclipsed by Mohammed Rafi.

Durrani used to be the King of Playback Singing, and not afraid show it.

The incident that shook the recording happened in 1949.

It was the first song that Lata Mangeshkar was to sing for composer Naushad, and was a duet with Durrani.

Durrani began to lay on his charms thickly on the young singer, thinking she would simper into submission. Lataji was then 21 years old.

When Lataji arrived for the recording, he began to act over-friendly. He asked her what she was wearing around her neck.

Lataji politely replied that it was a haathi ka daant (elephant's tusk) necklace and a gift from her late father.

Durrani dismissed her ornamental pride and said she should be wearing golden jewellery, as she had a golden voice.

He heaped praise on the newcomer, thinking she would be flattered.

But Lataji flared up and said she would not sing with this man ever.

This was a big decision for a singer who was just establishing herself. Not only was she ready to take on the biggest singer of the time but she also faced the risk of incensing a formidable composer like Naushad, who was giving her a break for the first time. And, of course, the music industry could have closed ranks on her.

But Lataji stood her ground and never sang with Durrani.

When I had asked Lataji about the incident, she went quiet for a while and then stated, "What you've said is true. Something did happen with this singer during my first recording with him. It was my first song with Naushadsaab ,but on the day of the recording, he was unwell and his assistant Ghulam Mohamedsaab was present. To cut a long story short, I didn't like the way Durranisaab spoke to me. I walked out of that recording and vowed never to sing with him. I kept my promise."

But the records show at least a dozen duets featuring the voices of Lataji and Durrani!

Lataji said, "In that case, the records give wrong information. The fact is, I never sang any song with Durrani. I believe even that first duet in Chandni Raat is credited to Durrani and me. That's false. Durrani was replaced in that duet by a singer called Sadat Khan. I'd never compromise with my conscience. That's not what my parents taught me." 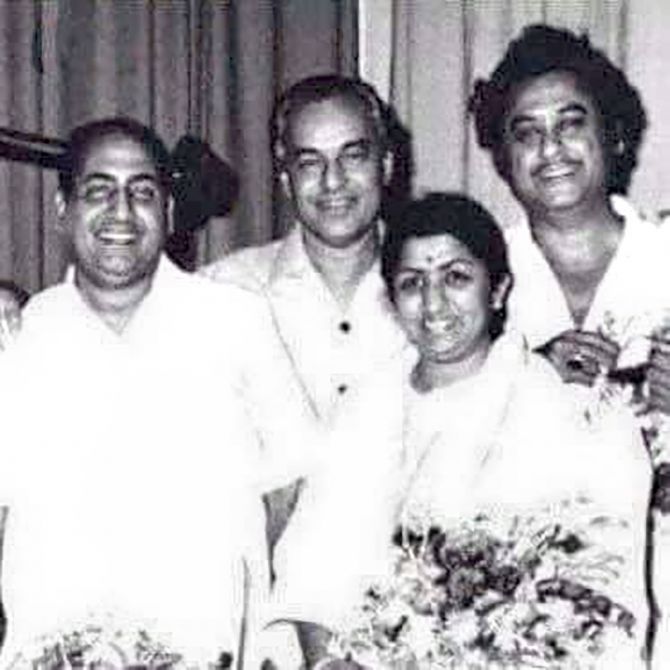 At a meeting attended by prominent singers and musicians to sort out the matter, he stood up and said, 'Main aaj se Lata ke saath nahin gaoonga.'

Lataji stormed out and phoned all her composers there and then and informed them to rope in another singer if it was a duet with Rafisaab.

One can't imagine their duets not happening and yet, it did not for five-six years.

The two voices, the yin and yang of Hindi cinema, separated over the issue of royalty for singers.

The composers were shocked.

They had to choose between the two monumental singers.

Those composers who went with Lataji had to make do with the poor man's Rafi, Mahendra Kapoor.

It was Composer Jaikishan took the initiative for a patch-up.

Every composer breathed a sigh of relief when the Hindi film music industry's biggest cold war came to an end.

In her biography on Rafisaab entitled Mohammed Rafi: My Abba: A Memoir, his daughter-in-law Yasmin Khalid wrote, 'Their differences arose over the issue of royalty payments on the songs sung by them. Lata wanted to be paid royalty and raised the issue with the producers. She expected Rafi to support her point of view, which was, in fact, justified.'

'But contrary to her expectations, Rafi took a different stand. He opined, 'When the producer pays the fee the singer demands for a song, the singer should not have a share in the royalty.' This was probably a hasty decision, taken without careful consideration.' 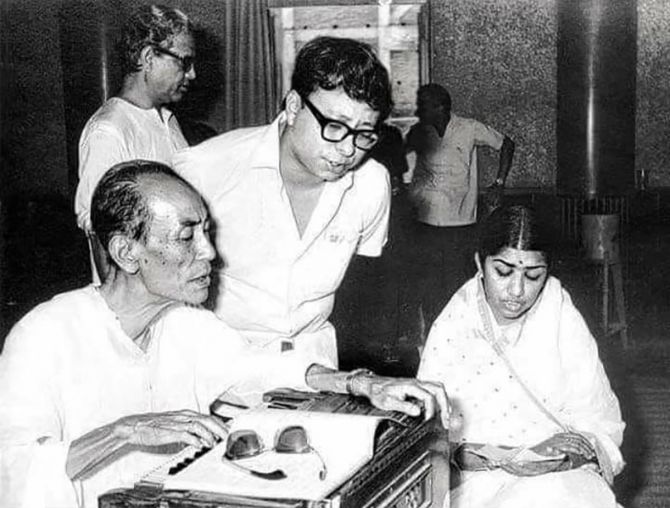 With Sachin Dev Burman, one of her favourite composers, the cold war lasted for more than three years.

It began when Burmandada was quoted in an article saying, 'Who made Lata's career? We (composers) did. We gave her the songs.'

It was S D Burman's son R D Burman, who mediated between his father and Lataji.

They broke the ice with the song Mora Gora Ang Layee Le in Bandini.

With Shankar of Shankar-Jaikishan fame, Lataji had a dispute over an acquired taste.

From 1949 to 1971, Shankar-Jaikishan were the undisputed kings of the charts.

A lot of their fame came from their association with Lata Mangeshkar, who nurtured their talent and sang a slew of songs to everlasting popularity.

Lataji was especially close to Jaikishan.

Hence, when the rift between the duo happened, Lataji was firmly entrenched on Jaikishan's side.

What happened between this high-powered musical duo almost destroyed their combined career and paved the way for the ascent of Laxmikant-Pyarelal.

The problems between Shankar and Jaikishan started when Shankar began promoting the voice of singer Sharda Rajan Iyer. In all his wisdom, Shankar thought Sharda was an outstanding singer, good enough to give Lata Mangeshkar a stiff competition.

The industry was amused by Shankar's sudden descent into tone deafness, and remarks like, 'We knew love was blind, but we didn't know love was deaf as well' spread like wildfire in the closely-knit film industry.

As one-half of the most powerful musical duo of the Hindi film industry, he had the clout to push his favoured voice into film projects.

Shankar's faith in Sharda's voice did not crack the charts, but it created irreparable cracks in his partnership with Jaikishan.

The brewing crisis came to a head with Shankar insisting on Sharda's voice for most of his female compositions in the mid-1960s while heroines insisted on being voiced by Lataji.

When Jaikishan died at the age of 41, Shankar's career came to a near-standstill.

Shankar bagged the biggie on condition that Lataji do the vocal honours.

Lataji agreed and Shankar, as a solo composer (though he continued to use Jaikishan's name in the credit titles), emerged with chartbusters like Chal Sanyasi Mandir Mein, Sun Bal Brahmachari, Yeh Hai Geeta Ka Gyan and Bali Umariya.

These revived Shankar's fortunes, but it was the last flicker of a dying flame.