He played James Bond seven times.
But the role Roger Moore most cherished was a different one.
Shreekant Sambrani pays tribute to the gentleman Bond. Calling a film series that has run 55 years with 24 entries from one production house alone -- the 25th is in the making -- and a couple more from others, with more than $7 billion in ticket sales, less than overwhelming would surely be heresy, but I am afraid that is what the James Bond cinematic oeuvre is for me.

They all run to a set formula, which is what makes them a franchise.

The plots are predictable as are the dénouements.

The acting is minimal, as is any impact on filmcraft. Glitzy girls or grand gizmos can do only so much and begin to pale after a while.

Skyfall (2012) alone has any claims to serious cinema.

Yet, so seductive are these fantasies of children of an adult age that I admit unashamedly I have seen them all almost as soon as they were released.

So, we end up discussing actors who have played the title character, the ultimate secret agent with 'a licence to kill' with trademark traits, including a weakness for dry martinis, shaken not stirred, almost greater than for the nearest babe.

Come to think of it, Commander Bond could not be a very credible spy.

'What sort of spy is recognised in every bar in town?' asked Roger Moore, who played Bond seven times, the most of any actor. Moore, 89, died May 23.

Five others have portrayed the mythical member of MI6, starting with Sean Connery (six films), running up to the present Bond, Daniel Craig, with four roles and a fifth one in the making.

The eminently forgettable George Lazenby and Timothy Dalton did the remaining three.

Connery has been widely hailed as the best Bond ever, who set the basic template.

Cool, cynical and casual about his job, he catapulted to stardom with his rugged looks and unmistakable Scots accent.

Brosnan was for me the Teflon Bond, with no purchase of any kind.

Some find Craig much in the tradition of Connery, but he is really miles behind.

That leaves us Moore who brought throwaway good looks and charm to the role. He was more suave than the others.

But the ultimate in that category for me was David Niven. He was Bond in Casino Royale (1967, but not part of the Eon series), rumoured to be the first choice of Bond's creator Ian Fleming.

Moore played Bond as an upper-class toff, quite bemused by what was happening.

'Is that really me, doing all those silly things?' Moore the actor seemed to be wondering about what Bond did in the film.

This was never more evident than in the circus scenes in Octopussy, when he was in outrageous clown gear.

'Sorry about that, old chap,' he appeared to be murmuring to the sundry villains whom he despatched with laser guns, bullets or jabs of his not-so-formidable fists.

He displayed a little boy's curiosity about the gadgets the indefatigable Q placed at his disposal, surprising himself as he used them.

Connery's Bond handled them with the same efficiency and despatch as a master craftsman does with his trusted tools.

Moore's Bond probably had P G Wodehouse as his godfather. 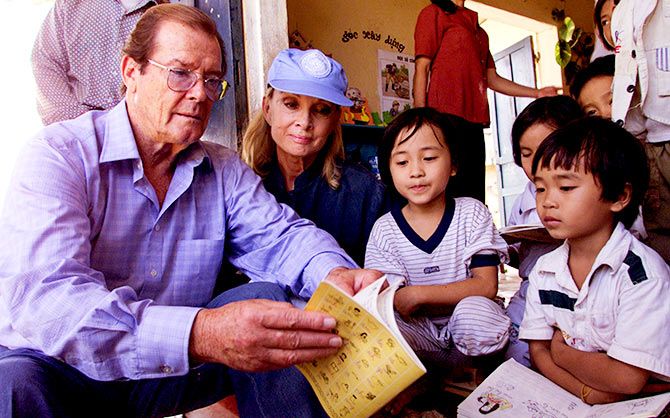 IMAGE: Roger Moore's most cherished role was that of UNICEF Goodwill Ambassador, as he admitted when he was knighted in 2003. Photograph: Reuters

Indian writing about Moore must inevitably come to Octopussy, the only Bond movie with an Indian connection.

In fact, I was asked to focus on Moore's India connection.

There is a personal one, with his mother, Lillian Pope, a British sergeant's daughter being born in Calcutta in 1905, but that's it.

Octopussy, on the other hand, had a huge India theme, but in retrospect, quite deplorable, albeit unintentional.

More than half of it was shot in Udaipur (which was miraculously near the Taj Mahal in the early scenes).

It had all the standard touristy kitsch.

Only two Indian actors feature in it: Kabir Bedi, as a henchman for a villain, and Vijay Amritraj, as a CIA hand deputed to assist Bond.

The producers toyed with the idea of an Indian female star, but could not think beyond Persis Khambata, who clearly did not fit the specs for a Bond leading lady.

Maud Adams was the ultimate choice. There was some talk of darkening her hair and complexion to give her a sort of an Indian background, falling just short of Al Jolson's blackface appearance in the first talkie, The Jazz Singer (1927) or Peter Sellers' bumbling Indian doctor Hrundi Bakshi in the execrable The Party (1968). Thank god she put her foot down.

Such were the tangential Bond/Moore-India links in those entirely un-PC times.

Moore acted in films before and after Bond, and on television, most notably as Simon Templar in The Saint. That role paved the way for the Bond franchise.

But the role the gentle Roger Moore most cherished was that of UNICEF Goodwill Ambassador, succeeding the divine Audrey Hepburn, as he admitted when he was knighted in 2003.