'There's no love for the song or Madhuri, no consideration for what it meant to an entire generation and zero respect for its iconic choreography,' says Sukanya Verma. 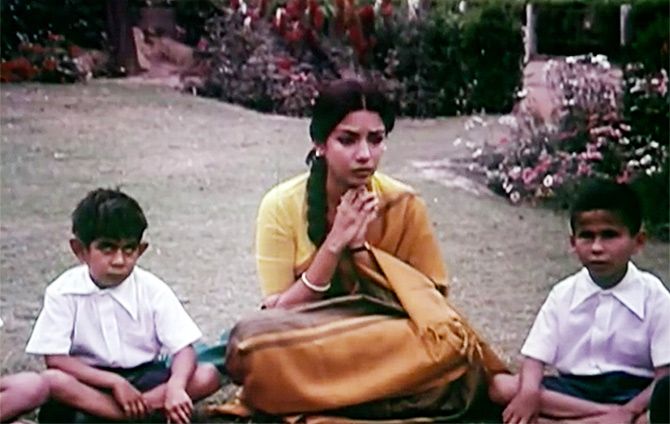 The great Sai Paranjype is 80 today.

The film-maker's lookout on life, the humanity and wit of her everyday characters and their instinctive response to any given situation -- never too evil nor too saintly -- just plain real lend her creations an everlasting charm and sensitivity.

I can't think of a time when I wasn't aware of her presence or the significance of her contribution.

I remember watching Sparsh as a child on the big screen, I am still amazed at how much I understood, how much it moved and influenced me.

The scenes where Shabana Azmi turns storyteller for the blind school kids are eternal favourites.

There's one about a princess fleeing from the clutches of a giant, another highlighting the misfortune of a kid named Harpapadlal Khatmalsen Pudiyaram Heengamal Thengaprasad.

I still haven't forgotten the tension and thrill I felt on watching the princess (played by Shabana) escape and the puny giant's crying frustration.

Sparsh is a mellow relationship drama, but Paranjype shoots the above sequences with the perception of a child.

Considering Paranjype's first book of fairy tales was published when she was only eight years old, that's hardly a surprise. 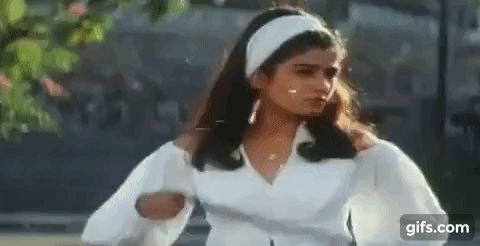 Tuesday thoughts: Raveena Tandon is to bubble gum what Rajinikanth is to sunglasses.

So thank God for Raveena and the badass spirit of her gum chewing vigour.

'I can't believe they've done this to Ek Do Reen. It's crass beyond imagination.'

Bollywood's paucity of ideas may be on an all-time high, but it doesn't give them the right to pulverise one beloved classic after another into crude, crummy, versions.

The Tezaab chartbuster is a pop culture jewel that turned Madhuri Dixit into an overnight star inspiring permanent awe among fans and dance lovers.

To see its glorious imagery reduced to the unflattering sight of Jacqueline Fernandez's ribcage is simply unacceptable.

If this was Hollywood, fans would have signed petitions to get it off air.

I am averse to remixes, but can live with ones that at least have their intentions in place.

But the Ek Do Teen remix is outright perversion.

There's no love for the song or Madhuri, no consideration for what it meant to an entire generation and zero respect for its iconic choreography. 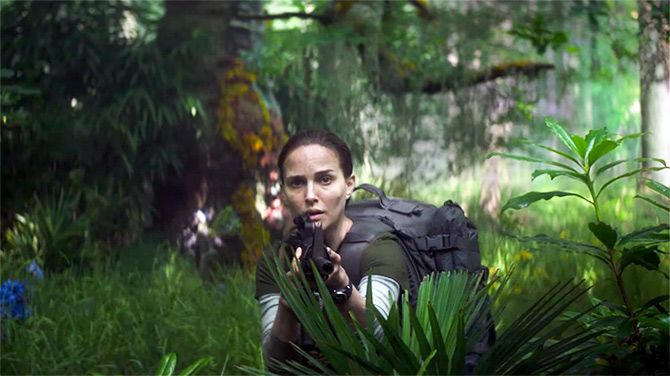 The sci-fi drama's many metaphors and investigations preoccupied by self-destruction and disease would feel hollow and meandering if it wasn't for the telling visuals.

I found it emotionally lacking, but the ethereal imagination it acquires in the third act blew my mind.

Starring Natalia Portman and Oscar Isaac, Annihilation is about a biologist who volunteers to set foot inside 'Shimmer', an iridescent-hued electromagnetic field to seek answers about its only survivor -- her critically ill husband.

A review I read likens it to the ancient Greek legend of Orpheus and his dear wife Eurydice. Unable to deal with the latter's tragic, unexpected, death, Orpheus goes all the way to meet Hades, God of Underworld in a bid to restore her back to life.

On the other hand, I was reminded of Savitri's efforts to revive Satyavan by appealing to Yama, God of Death.

Translating mythology for modern world prompts fascinating results. It's almost as if Annihilation and its journey into damaged souls is using it like a map to subvert into darkness and enigma. 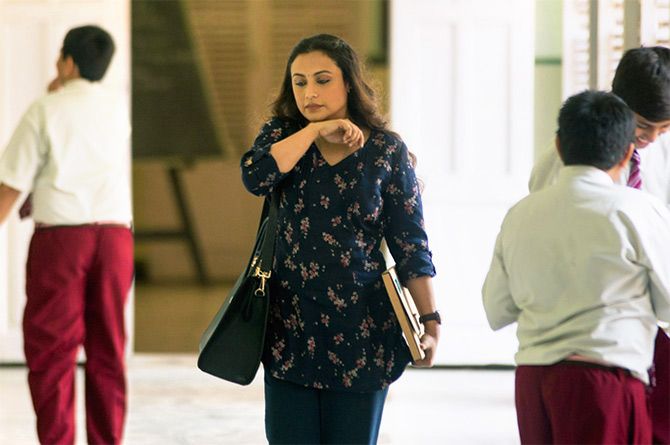 Rani Mukerji's Hichki doesn't do anything for Tourette's syndrome, but it reiterates the worth of a good actor. If only it was for a more realised script.

Like I wrote in my review, it's an out-and-out Rani show, which only collapses when its spontaneity is suppressed to force down a done-to-death cycle of tantrums, melodrama and collective redemption.

But Rani's work is a triumph.

She is so good at picking the sur of her character, always an attractive blend of mainstream charisma and know-my-art savvy.

Every day is a struggle, a point to prove for her school teacher juggling between a snide colleague and unruly class of teenaged students.

Her idealism is obvious because she puts an effort to seem unruffled. Try jabbing your jaw with a fist and you'll realise how tough that is.

Never underestimate the power of shabby subtitles. They can turn a dull day into an entertaining one. 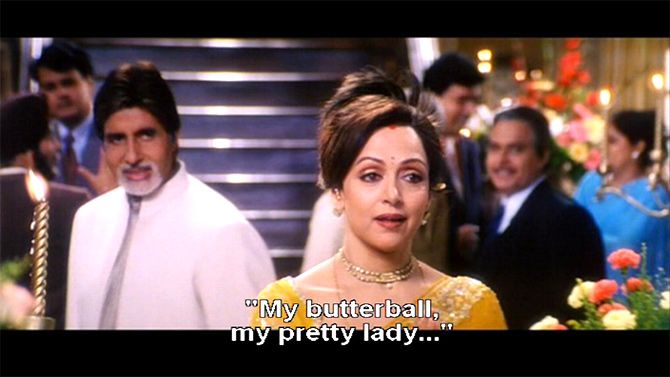 And Big B's baap-level dialogues dumbs down to: 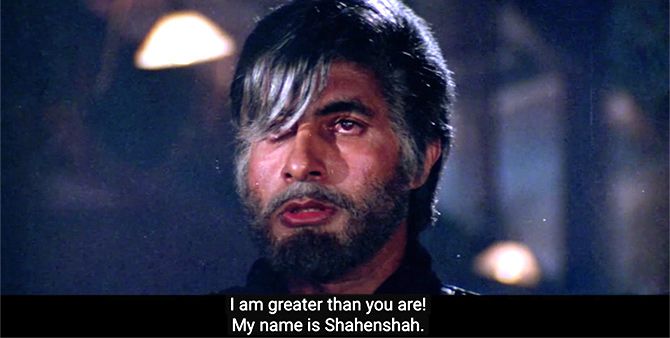 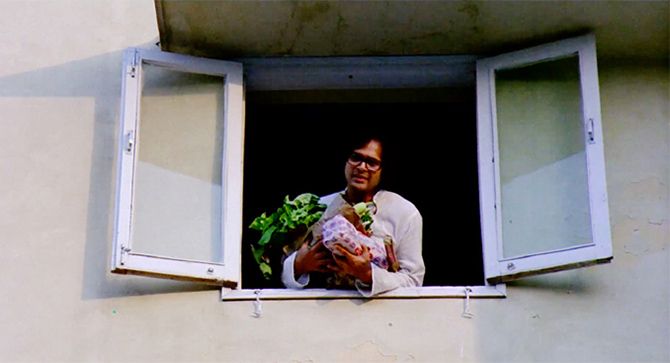 The Google Doodle in his honour may not be an accurate illustration of his genial charm; it's still nice to see the actor get celebrated.

As an avid fan, I've always been vocal in my admiration of the late celebrity.

Can you think of any other actor who can look this adorable with shave foam on his face or holding all his grocery or a jhadoo under his arm?

Here's a fun bit I learned about one of his best movies today.

In Sai Paranjype's original teleplay, Dhuan Dhuan that formed the basis for Chashme Buddoor, all three friends are equally frivolous and pursue the same girl and weave false accounts of their conquests with her.

In the end, nobody wants or gets the girl.

Thankfully, the movie is not so bleak.

While Ravi Baswani and Rakesh Bedi's slackers stay true to Sai's original vision, the third character -- played by Farooque Saab -- is the classic nice guy whose tutti-frutti romance with Miss Chamko (Deepti Naval) becomes the crux of this 1981 classic.

I wouldn't want it any other way. 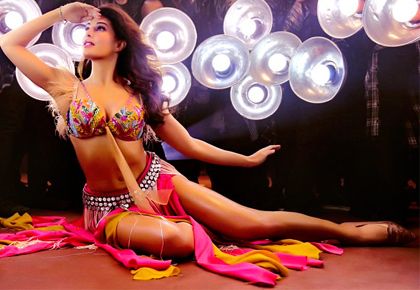 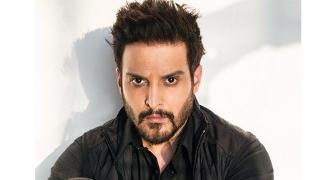 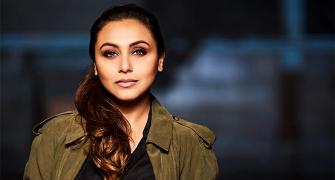 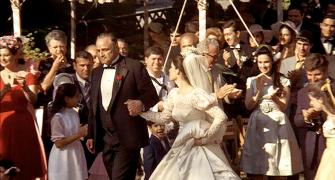 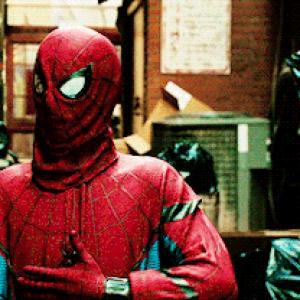 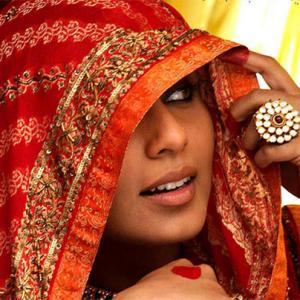