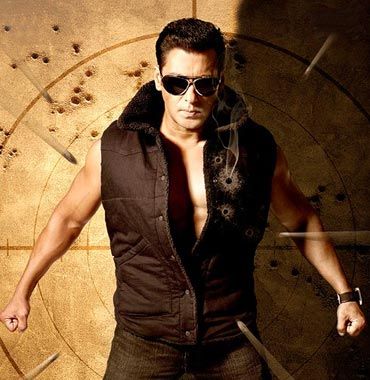 'His is a naive genius which eludes the sophisticated. He is natural, lazy, effortless.'

'He is no match for other stars. His acting is poor, his dancing is worse. Yet Salman as Salman is miles ahead of them....' says Shiv Visvanathan.

Every time I watch Salman Khan I am puzzled and intrigued and fascinated. I am not a great fan of his, but I watch him regularly because I know that almost everyone does. He is a strange combination of the obvious and elusive.

He is the plain Khan next door and yet his simplicity is not simple. When he dances, he is stiff and yet when he moves, the crowd seems to move with him.

He denotes the ultimate accessibility. His is a naive genius which eludes the sophisticated. He is natural, lazy, effortless. If you consider him analytically, he is no match for other stars. His acting is poor, his dancing is worse.

Yet Salman as Salman is miles ahead of them. He is a man close to the archetype of himself, an original because he mimics the ordinariness of his self. He invites you on stage, smiles at his own success, suggests it could have happened to you.

His is the ultimate democracy, a sense that the dream is possible for anyone and everyone.

It is a six pack notion of film and democracy, exuberant in its expectation of life, yet modest about itself. Success seems to surprise him. He is stiff as a board, he mimics himself, quotes himself to say 'therefore I am' and yet there is no sense of envy and distance in the crowd. He is the collective incarnation of all of them, therefore 'Our Salman.'

He brings to naivete the whimsy that Raj Kapoor brought to romance. He is the eventual crowd pleaser who senses the magic of the crowd as he stands before them. He is the ultimate natural in the age of the information revolution where method, technique, heuristic is all, a fact of nature in the age of the artifact.

Salman just is. He is alive to his mistakes, his edginess and seems to enjoy the fact he is an improbable miracle with so many defects and yet his very incompleteness, adds to the sense of the perennial.

The other stars have to add bits of the new to sustain interest, but he remains himself like the seasons. I cannot think of a man who acts badly, dances stiffly, behaves gawkily and yet has the genius of feeling at home in the world.

In a way, it is his mistakes that make him, not his achievements. The black buck episode, the shortened relationships with women add to his mystique. He seems artfully helpless and yet so charmingly able.

He wants to show that there is no mystique to the magic of Salman Khan. He enters almost absent mindedly and grows and feeds on the sense of the crowd. They respond to his every move, participate in a magical sense of the crowd. The rest like Amitabh Bachchan, Shah Rukh Khan, Aamir are distant; they capture the horizon while he domesticates the neighbourhood.

When I watch Bigg Boss, I realise it is eventless without him. He is the adrenalin charge to everydayness of being and yet his judgments of character are shrewd. He is the almost idiot who has a sense of the opportunistic. The audience treats Bigg Boss like a five-day match; in fact a hundred day one and feels Salman makes it a T-20 show.

Salman does not grow, he unfolds giving more of himself, showing there is so much more to give exemplifying the generosity of the star to a fan. He feeds on them and in turn feeds them with every possibility. When he enters, he sucks in the crowds. They want him to be just Salman and he does that effortlessly.

They wait for his comments and it seems to amplify everything they wanted to say over the week. The long wait is worth every minute as Salman cannot disappoint. He is the closest to the star as reflecting the general will. As result, none of his role can be great. They have to be memorable because they are basically a memorial, a mnemonics of his own self. As he belts out favourite lines from his movies, he recreates himself.

Salman has to be Salman to remain perpetually Salman. When a man can only be more of himself. He has arrived in a way no other star has arrived. He does not have to improve, improvise, surprise. He can be all that by being himself. All he has to do is to elude a bit of himself to feed the hysteria of expectation.

One must be comparative and watch the trajectory of three stars who made it big. Aamir Khan grew intellectually with each film. He was methodological, reflective, he researched roles like Lagaan and Three Idiots. He is one of our better known social analysts thanks to Satyamev Jayate, who thinks every step out.

Shah Rukh Khan is a shrewd professional, can combine villainy and heroism. He too needs constant reinvention to survive. He is a self reflective about Bollywood and realises he is one of its myths.

Salman shows no such intellectualism. He merely succeeds, eluding the critics at every step. They realise his popularity and populism transcends their critical reviews.

Shah Rukh ages, Aamir matures, but Salman does not grow. He gets more nuanced as his own archetype.

Salman's stage life reverses Shakespeare's seven ages of man in an odd way. In Shakespeare, the seven ages of man are played out separately. Amitabh can play them seriously, but Salman captures all ages in every age. He is a teenager at 50, a wise child at 20. He telescopes time to appeal to all ages.

He has the tentativeness of the younger brother, the authority of an older one. He is a modern, yet combines old fashioned values. He is a continuous presence not a collection of events like the rest. He is being confronting doing, and yet the paradigmatic action hero, wolf boy perpetually playing Boy Scout.

Yet his charm lies in the fact that even he seems to play spectator to his own event claiming that this is me but not quite the me I want to be. He never quite seems to settle into anything and yet seems content with himself.

He is difficult to label except as Salman and that sums it up. A star born to be himself. As a self, he is different, gawky and as a role he is Bollywood genius summoning mimicry from his audience. He projects that small touch of the ineffable, the little dabs of the human that make him a star.

Bollywood for all its genius has only one Salman Khan. It is time to celebrate him.