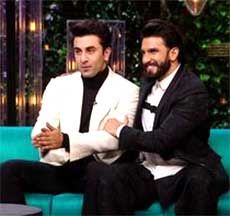 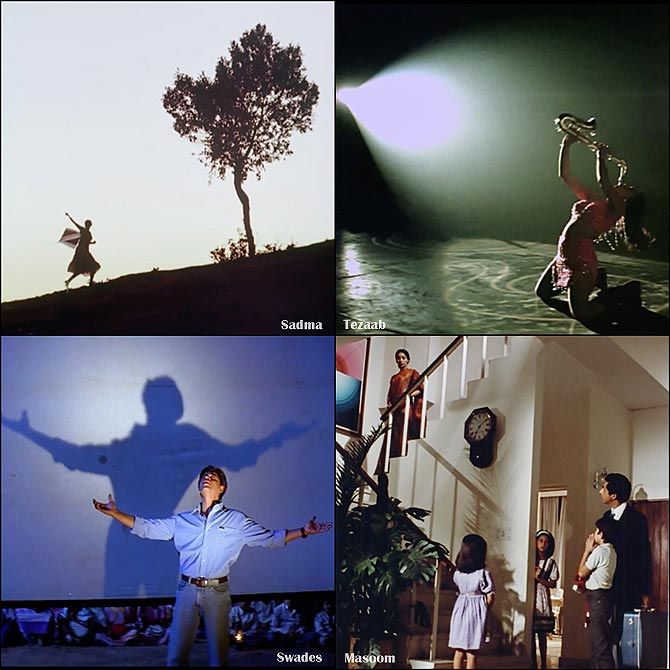 Some people like to mark their favourite sentences or passages in a book. I do the same with movie scenes on my computer.

It’s remarkable how one fleeting but flawless shot can express such vast sentiment, symbolism and style.

Recently, I joined a closed Facebook group dedicated to sharing cinematic imagery that’s telling even when snipped out of the big picture. I find this activity immensely satisfying and stimulating as it allows me to celebrate a film’s minutest details, which is not always possible when focused on larger issues.

As part of my Monday exercise, I handpick four shots from four different movies -- Sadma, Tezaab, Swades and Masoom and what they individually convey -- verve, limelight, saviour and apprehension. 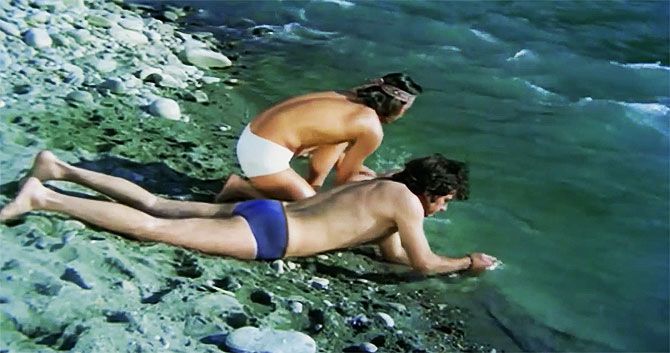 Whoa-ho, ho! Now that’s a sight I don’t see too often in a 1970s potboiler, nearly equivalent to Bollywood’s version of skinny-dipping.

But the minute these fellas turn to face the camera, surprise makes way for amusement for it’s none other than Feroz ‘could I be any more sexy’ Khan and his slick partner-in-crime, Danny Denzongpa. 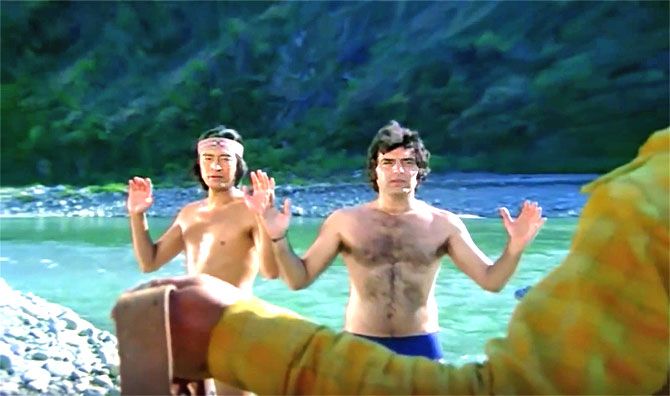 It’s a scene from one of his Western rip-offs Kaala Sona where these two lean mean machines attract the unwanted attention of three burly horse riders.

Before the mandatory dishoom dishoom, there’s a good 60 seconds of the duo flaunting their sinewy physique for our lusting pleasure as well one creepy, gum-chewing goon who can’t seem to get his eyes off his prize.

How real is that brawn though! Especially when today every single guy in the industry looks like he stepped out of an iron pumping, protein-shake gulping six-pack factory. City of stars, are you shining just for me?

It certainly feels so as I get ready to visit La La Land (amongst 2016’s most awaited films, as it turns out, one of the best too, if not THE best.)

Bless the good people at Mumbai Film Festival and Viacom18 who ensured the India premiere of Damien Chazelle’s La La Land starring Ryan Gosling and Emma Stone one month before its official release. And it’s not long before a queue of chatty, champagne-sipping folks transforms into a delighted, dumbfounded audience.

Chazelle’s affection and nostalgia for the two most indispensable facets of Los Angeles’s identity -- movies and music -- transcends the screen and stirs the senses in a way I had almost forgotten.

Ryan Gosling and Emma Stone share this marvellous gift to personify the magnetism of a ‘somebody’ and the reserve of a ‘nobody.’ It’s what makes their success or suffering of value.

Two years back, I watched Jacques Demy’s exquisite French musical The Umbrellas of Cherbourg under MAMI’s Rendezvous section in all its restored print glory. Its influence on Chazelle is undeniable (in one scene Stone is penning a play featuring a protagonist named Genevieve, a clear nod to the Catherine Deneuve’s character in the 1964 film) but the final sequence, the finest expression of romance and rue, is a masterstroke.

In my compilation of his best films once, I mentioned how ‘his disarming common man disposition, conveying the day-to-day problems of the bourgeoisie milieu with sensitivity and insight, distinguished him from his peers.’

I’ve relished his work across every genre, be it his Golmaal tactics or dark side in Khamosh but the one I related to the most is the socially awkward, bungling employee of Jackson Tolaram Private Limited Company.

Now Basu Chaterjee’s Chhoti Si Baat is a charming rom-com with tremendous repeat value. (Although I was terribly disappointed to discover the extent to which it borrows from British comedy, School of Scoundrels.) But the source of its humour is Palekar’s pushover hero, too low on confidence and nerve, to tell a girl he likes her or stop people from exploiting him.

Ever so nuanced, the actor is convincing in his metamorphosis. The personality shift doesn’t feel drastic or out of place.

I should know. I improved too.

Editing woes and problematic characterisation aside, Gauri Shinde’s Friday offering impressed me a great deal for quite a few reasons.

Dear Zindagi talks to an audience conditioned to believe therapy is applicable for serious, life-threatening concerns only. ‘Child abuse,’ remarks a presumptuous know-all, sitting right behind me, in anticipation of Alia’s big reveal. He’d probably justify that with ‘because it’s what happened in Imtiaz Ali’s Highway’ logic.

But the fact that Alia’s anxiety stems from abandonment as a kid reveals a broad tendency among adults to see children as cute, tiny, inattentive beings with no mind of their own. Except they too feel a sense of humiliation, hurt and isolation, which, if anything, only gets intensified when they are too young to convey it outright. 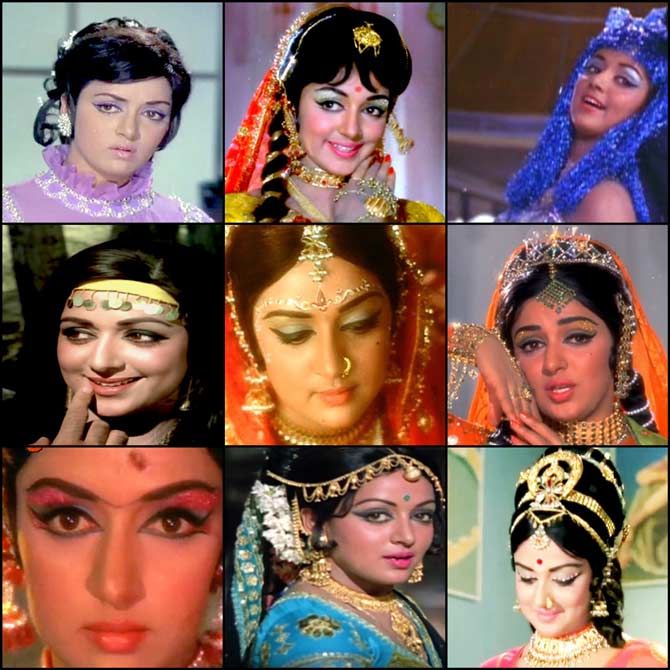 Two hours of strictly Hema Malini songs later, I’ll tell you this: Bollywood’s Dream Girl is the queen of eye make up. 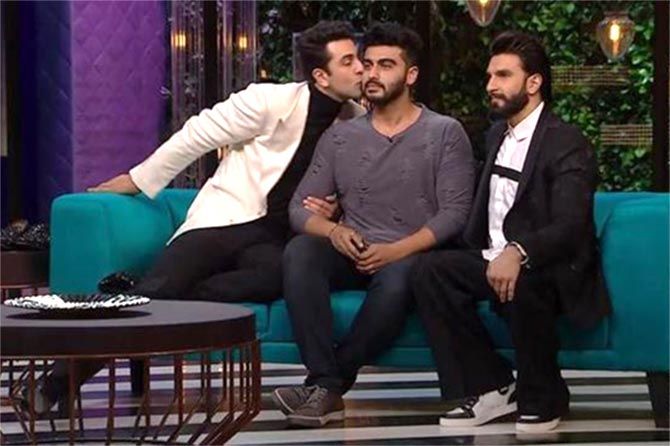 Ranbir Kapoor and Ranveer Singh on Koffee with Karan -- it is the next best thing to a two-hero project, some would say.

I am not sure if it’s because he shaved or Ae Dil Hai Mushkil’s success has rubbed off on Ranbir but he appears more glowing and assured than all those self-analysing interviews prior to its release. Especially when the conversation veers away from his romance or lack of it.

Indeed, it’s a fairly entertaining episode when the focus isn’t on their love lives. What earth-shattering novelty can be found in a movie star’s acknowledgment of a relationship or breakup?

Change the topic though and the Eer/Bir boys transform into blasphemous buffoons injecting the show with wacky spontaneity and spunk.

Now can you guys please go and sign a movie?