He hardly wants to talk about himself. He wants his work to speak for him.
Subhash K Jha on his friend Prabhudheva, who is 48 today, April 3. 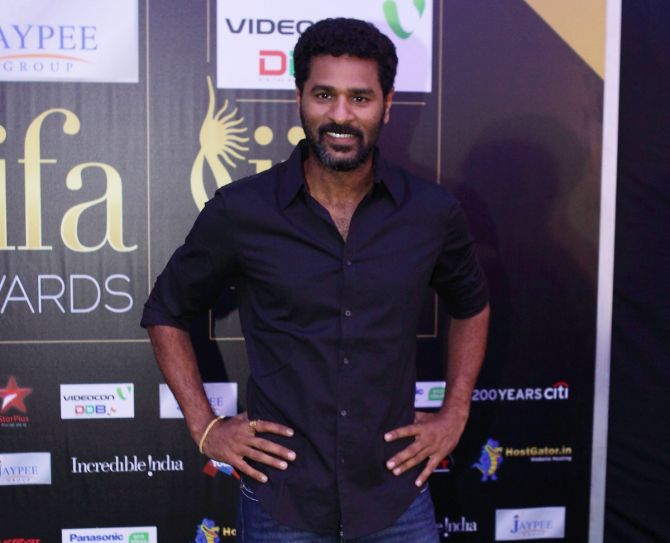 Though we've been speaking for more than 15 years, I've never met my friend Prabhudheva.

But I can say this with certainty about this multi-talented workaholic: He is one of the kindest, most gentle, souls I've ever come across.

Always returning my calls (he never texts), always patiently sharing all the information that I wanted. Never says no to any question that I have for him.

I came to know Prabhu under the corniest of circumstances.

News of Prabhu dating actress Nayanthara was all over.

I normally don't interfere in the private lives of stars. But an editor, quite a bully if I may say so, insisted that I break my personal censor code.

"What is the point of being such a well-connected writer if you can't get a scoop revelation?" she argued.

I could think of many points. But I complied meekly. It was a mistake.

When I contacted Prabhu he called back and said, "Sir, I can't lie to you. But I can't talk about this. I am surprised a writer like you is asking about this."

It was a revelatory moment for me. Prabhu doesn't know this. But the reason I never succumb to the temptation of prying into bedrooms is that opening conversation with Prabhu.

Since then we hit it off and had many conversations. It is difficult to make him talk. He hardly wants to talk about himself.

This man wants his work to speak for him. This, in today's day and age of trumpet-blowing, is a hard attitude to live up to.

I often have to excavate information out of Prabhu. And there is such a vast minefield of activities to dig out information from.

Prabhu is a choreographer, to begin with. Now he has stopped choreographing unless a friend asks him.

He is primarily a film-maker now, and the fact that Salman Khan entrusted him with two back-to-back home productions (Dabangg 3 and Radhe) shows how much Prabhu is trusted as an artist and a human being.

Quite simply put, Prabhu is a dream worker. He has no interest in anything but his work.

An actor or an actress can therefore bring a love interest on the set and kiss him/her right in front of him, Prabhu would look on with no expression. He doesn't gossip.

Once I teased him about the same actress in a number of his films and he blushed on the phone and was deeply embarrassed by the implications.

"Sir, it's just a coincidence." I had to tell him I was just teasing him.

Recently I heard he had remarried. He hasn't told me about his remarriage. I haven't asked. I haven't forgotten our first conversation.

Stay the way you are, Prabhu. Lots of us say we don't care about what's going on around us. But you don't.