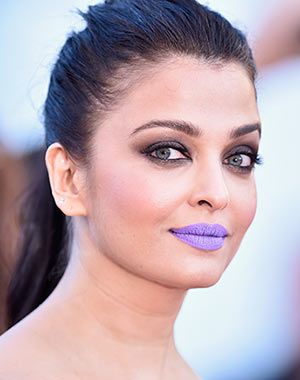 I am in Delhi these days. Delhi, most months, is not an easy city to live in but in May it's just impossible. When not cursing the unbearable heat and the scalding hot water that, as a consequence, flows from the tap, I find relief in, what else, movies.

Here's the lowdown on my super-filmi week. 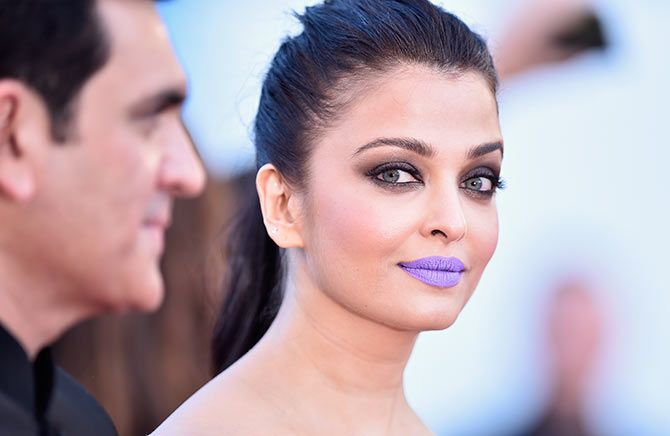 IMAGE: Aishwarya Rai Bachchan attends the From The Land Of The Moon premiere at Cannes. Photograph: Pascal Le Segretain/Getty Images.

Purple is one of the grooviest colours and one of my favourite colours. As much as I love it on Prince, Phantom and Provence, I'll admit I was far from thrilled to see it plastered on Aishwarya Rai Bachchan's perfect pout at the Cannes red carpet. It just doesn't make sense unless Leroy (you know, Veronica Lodge's prankster nephew) works for L'Oréal now.

It reminded me of the time when, as kids, we'd devour on colourful ice golas from the street till our lips and tongue turned all shades of orange and purple. Funny, yes. Fashionable, I don't think so.

Having said that, hats off to her for being such a sport about the whole thing.

Aishwarya's lavender lips are a distant memory as soon as I chance upon an image so uproariously bizarre (and pink), only a manga comic artist would do my expression true justice. 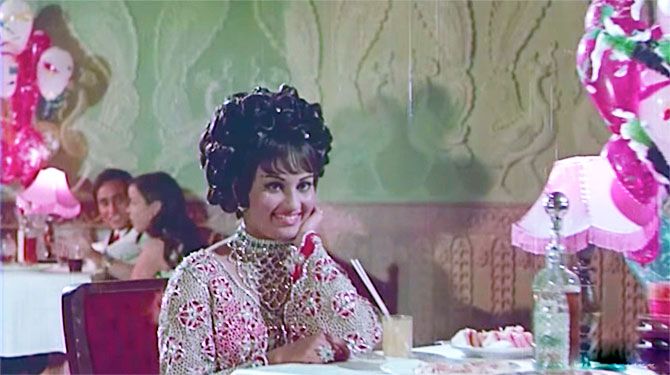 Here's the thing: what if artichoke was hair and fixed on Reena Roy's head? Discover. Recover.

Delhi's sweltering heat and pictures of nieces and nephews enjoying their summer vacation in theme camps and fancy resorts are playing on my mind.

As a school kid, every year around this time, I'd travel to the capital to visit my grandmother. A major part of the trip's attraction was my uncle's VHS player and the next-door neighbour's video library. I'd spend hours browsing through the available titles and the one thing I distinctly remember is just HOW MANY of these starred Jeetendra.

For fun's sake, I look it up. It's a senseless lost-and-found '80s baloney where Jumping Jack runs a fan business. Unfortunately, the only thing that will spin in this movie is your brain.

In one scene, Jeetendra is reproaching Sridevi for being Paresh Rawal's (who's called Teja but no mark, no meaning) daughter as though she can help it. Except his snowman jumper distracts you from the absurdity of it all. 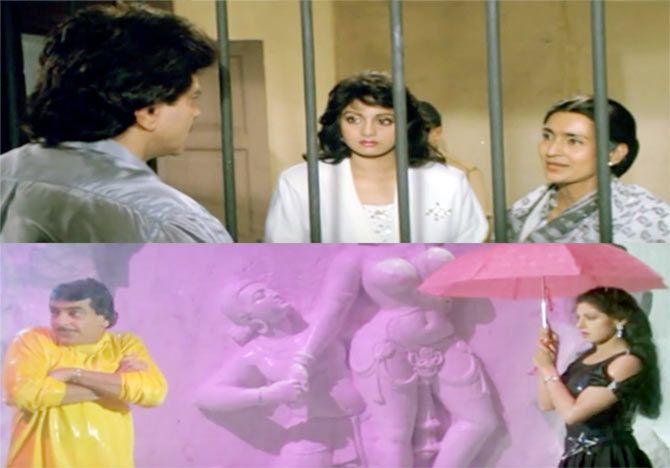 IMAGE: Just how the first scene lead to the next? Jeetendra, Sridevi, Nutan in Sone Pe Suhaaga.

In another, he's doing the exact same thing, only from behind bars, until mother Nutan intervenes and the scene inexplicably cuts to Jeetu-Sri standing in pouring rain against a Khajuraho-inspired sculpture.

But the moment that takes the cake is the one when Kimi Katkar tells Anil Kapoor, "Meri ek hi tammana hai ki main Olympics main gold medal haasil karoon." Even as you're digesting her desire, Kapoor promises to help Kimi achieve this goal by immediately finding trees to dance around of course. 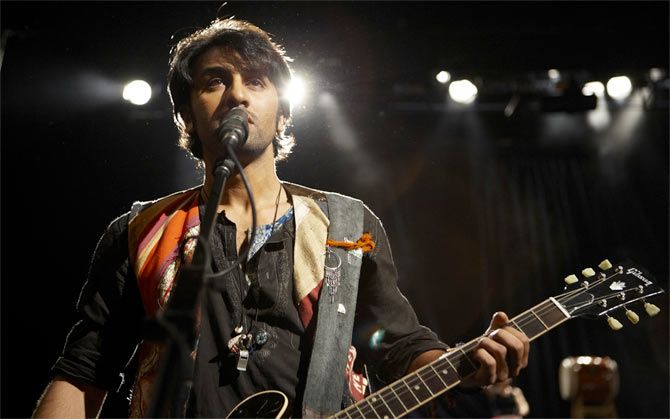 Rampant metro construction in Noida these days is creating traffic hell for commuters. Lack of good music on most radio stations is only making it worse.

"Nothing good in Hindi film music this year yet," I grumble in my hopeless quest to find something worthwhile amid the gabby RJs and incessant ads on air.

Frightening, really. It's almost June now, but there's still nothing noteworthy to listen to from a stockpile of recycled junk or half-hearted creativity. Not one melody that's stayed on like a Rockstar or Lootera.

There was a time when even random potboilers boasted of exquisite tunes. Right now, even the biggest movies cannot boast of songs with a long shelf life. 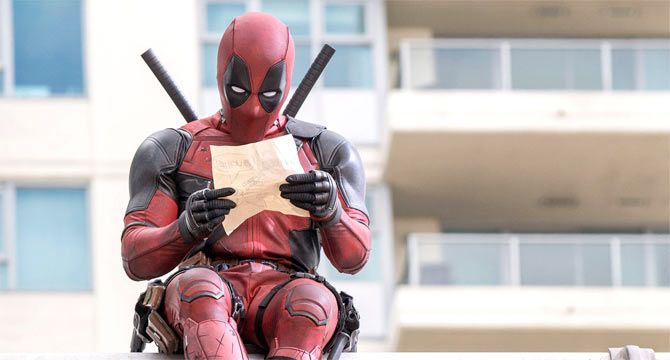 IMAGE: A still from Deadpool.

Despite being one of the many people who dreamt of a Deadpool movie for years, I got around to watching it only now. Goes without saying that Ryan Reynolds is a scream as the 'Merc with a Mouth', even if one doesn't see his face for a better part of its duration.

Come to think of it, even in the animated flick The Croods, where he lends his voice to Guy, Reynolds' chatty buoyancy is hard to miss.

Sure, Deadpool is enjoyable and the opening credits tickle long after they've rolled except it didn't blow my mind like I hoped it would. It's full of sharp action and the humour is expectedly insolent, but the shtick gets tired after a while. The script simply doesn't hold any surprise.

Still, it's a feat that the movie got made at all and one so successful at that. Just wish for its sequel to pack in some sweet, stinging conflict. 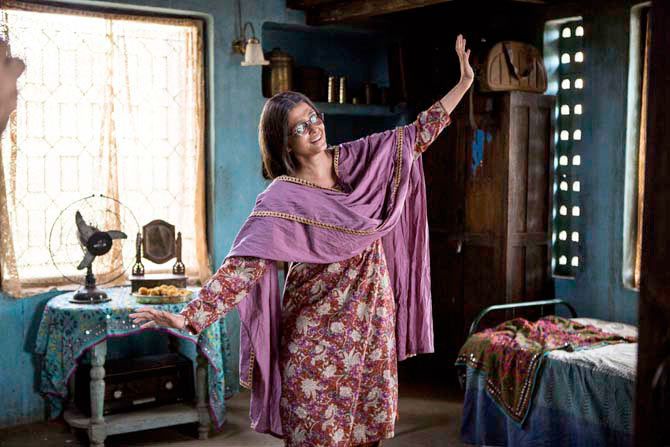 I head to the multiplex near me to catch an early morning show of Omung Kumar's Sarbjit.

As I mentioned in my review, "Omung Kumar's access to inspiring individuals is the only noteworthy aspect of his filmmaking. After squandering an opportunity with the biopic on boxing champion Mary Kom, he returns to chronicle the long struggle to bring justice to Sarabjit Singh by his sister, Dalbir Kaur, in the weepy, wasted premise of Sarbjit. Sans the Kumar's cosmetic sensitivity and overblown depiction of incredible lives, it proves to be his undoing yet again."

Yet, given how frequently substandard vision is perceived to be in the same space as the profundity of the reality it is emulating, I won't be shocked if Sarbjit benefits like Mary Kom did. 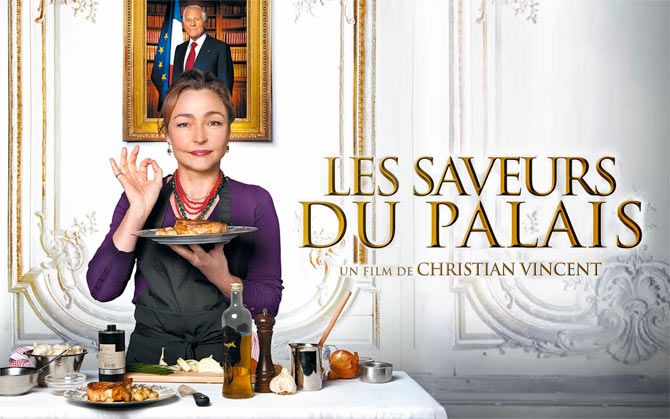 The constant Cannes updates tempts me to treat myself to a French film I have been meaning to watch for some time now. Released in 2012, Les Saveurs du Palais is based on the true story of French President François Mitterrand's personal chef, Daniele Mazet-Delpeuch.

Like a fluffy souffle, it doesn't engage in much complexity but is full of taste and appeal while it lasts. Films centered on food, especially French food, make for delectable viewing. This one's no  different. All its understated layers and metaphors are concealed in the technique and elegance of culinary challenges.

I can easily picture Madhuri Dixit recreating Catherine Frot's commanding, graceful presence around Amitabh Bachchan's stately but foodie President/PM, while Rishi Kapoor plays her disgruntled old-school rival in the kitchen if ever Bollywood decided to buy rights and remake. Perhaps someone with Shakun Batra or Zoya Akhtar's dialled down sensibilities would do it justice.

Interestingly, a few years back I watched another French food-centric comedy, Comme un Chef and tweeted suggesting a remake directed by Batra again, with Rishi Kapoor and Aamir Khan as as two chefs belonging to two different generations who find a balance in their relationship and cooking collaboration. To my surprise, its director Daniel Cohen responded promptly and in complete agreement.

One can only wish. And wait for Saif Ali Khan to do his version of the mouth-watering grilled cheese sandwich in the upcoming remake of Jon Favreau's Chef. 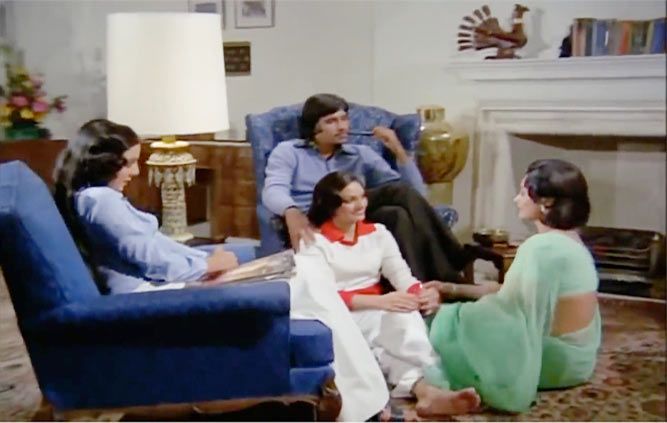 Ever the quizmaster, I ask three people the name of Amitabh Bachchan's bungalow in Kabhi Kabhie. They didn't know or answered wrong. Let's see if you remember. You've got a week's time!