Sitting inside a crowded movie theatre in Nariman Point, South Mumbai [Images], surrounded by other pasty-skinned foreigners and a few overtly wealthy Indians, I was forced to stifle an audible groan.

"What will we survive on, Jamal?" Freida Pinto [Images] had asked.

Enough was enough. For an hour and a half (and for Rs 250), I had watched a right proper Brit and a middle-class Mumbaikar stumble through cheesy dialogue, all the while pretending to represent the Mumbai slums.

'It's official,' I thought. 'Slumdog Millionaire is massively disappointing. It's inauthentic and vain. And it's making a mockery of Hollywood's annual awards season.'

The realisation saddened me because I tried hard to like the film. Desperately, in fact. From the moment I had first heard of acclaimed director Danny Boyle's [Images] plan to shoot a movie in India, I positively swooned.

'My India, my Mumbai, no longer a crude caricature!' I had gushed. 'The world will finally see her as she is!'

I told all within earshot how badly I wanted to see Boyle's masterpiece. I made a Slumdog Millionaire [Images] poster my desktop computer's wallpaper and compulsively watched and re-watched the film's two minute trailer. 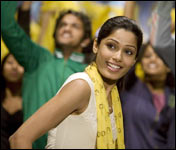 During the horror of 26/11, while Western film critics instructed the laity to 'see Slumdog Millionaire in order to better understand this benighted Asian metropolis', I consoled myself by conjuring up images of packed American theatres, where attentive US movie-goers could receive a genuine taste of Mumbai.

So when Indian friends pronounced themselves 'woefully underwhelmed' with the 'overrated' film, I dismissed their opinions and instead turned to glowing reviews in the Chicago Tribune, the Wall Street Journal and others.

"Ingrates," I secretly said of Slumdog's Indian critics. "Finally, someone has shown you the heart of your own city, the city you thought you knew. How dare you pass judgement! See the steady stream of awards? The four Golden Globes? Pick up a copy of the New York Times and read what Danny Boyle has done for you!"

In the months leading up to Slumdog's India release, I continued to describe it in only the most flattering of terms: 'the ultimate underdog film', a 'mad-cap, life-affirming tour of modern India', 'Danny Boyle's Ode to Mumbai' and a 'high-paced primer on life in Asia's largest slum'.

And, despite the temptation of easy available pirated DVDs, I waited for the official India release, hoping for the full 'movie-going' experience. I was prepared to be blown away. Really and truly, ready for blast-off.

But, from the start, during the torture scene, which itself was painful to watch, something didn't feel right. Maybe unrealistic expectations had siphoned away my enjoyment. But countless times before I had entered a movie theatre with high expectations, yet left completely satisfied.

Maybe living in India had dulled some of Slumdog's romance. But I know a Delhi-based German expat who calls it the 'greatest film ever made'. It's just that, ultimately, I found Slumdog Millionaire to be decidedly average. An earnest, talented outsider's cursory glance at Mumbai slum-life. But the best film of 2008? Worthy of all the awards and accolades that Hollywood has to offer? Hardly.

And why in the world has Simon Beaufoy been awarded best screenplay at the Golden Globes? It's terrible, worse than bad, more full of holes than a block of Swiss cheese. 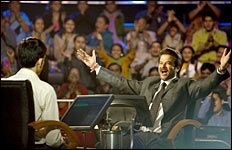 Some argue that it's not a documentary, just a movie. I understand. My complaints with the screenplay have nothing to do with the coincidences or the question-and-answer inspired flashbacks. Those were cute. They drove the story. They were digestible.

It was the absurdity of slum-kids knowing all about Samuel Colt, the completely inauthentic (and clich�d) call-centre scenes, the bizarrely callous game show host, the indifferent studio audience, the implausibility of a hardened Mumbai gangster asking for a sandwich, the doubtful CST rendezvous (Ever seen CST at 5 pm? The phrase 'needle in a haystack' comes to mind), the ubiquitous Queen's English, the improbability of a fully-clad mini-Ram ready to wage war on Mumbai's Muslims. But, most of all, it was the disastrous performance of the lead actor, Dev Patel.

For starters, his Jamal couldn't be any more British if he tried. Apparently, having brown skin was the only pre-requisite for taking on the role. Never mind the accent. What resulted, naturally, was a completely unbelievable character. Every single thing he did rang hollow: every piece of dialogue, every bit of action, everything. Let's be honest. Dev Patel wouldn't last five minutes in a Mumbai slum.

And to those of us half-way acquainted with the city's seedier side, Patel's naivete dragged down the movie, and was annoyingly bothersome throughout, like a broken tooth.

I found it impossible to feel emotionally invested with the main characters. All the way up to the final kiss, I truly did not care what happened to Jamal or to Latika. And I'm as sentimental and sappy as the next guy. It's just that this love story didn't work.

That's not to say that Danny Boyle achieved nothing here: the shots are interesting, the action frenetic, the soundtrack masterfully married to the narrative, and so on. Plus, in many ways, I respect what the film unveiled by peeling back Mumbai's epidermis and peering inside.

Yes, despite what the most zealous of naysayers claim, India's problems are real and manifold: extreme poverty, communal violence, child beggary, painful vestiges of the caste system, to name a few. And all of these exist even in modern, urban India, the India of all those Western magazines profiles, the India of business process outsourcing and information technology.

So it's good that someone has held up a mirror to remind India that, yes, you've come far, but that you have a long way to go, too.

Still, these are weighty, charged issues, perhaps best not hastily reproduced and distilled by a mere passer-by. Boyle readily admits he has no great knowledge of, intimacy with or insight into India, though today he's quite complimentary of the city so responsible for his recent fortune.

Before seeing the movie, I thought those who claimed that it portrayed India in a negative light were being ridiculously defensive. Having seen it, I understand where they are coming from. Yes, Mumbai has squalor and violence and cruelty. But it has great humanity and brotherhood and character, none of which were adequately represented in the film.

One of the first negative reviews of Slumdog I read was from the blog The Great Bong, who absolutely lacerated it. In it, the blogger wrote, "Well yes these things do happen in India. However the problem is when you show every hellish thing possible all happening to the same person. Then it stretches reason and believability and just looks like you are packing in every negative thing that Westerners perceive about India for the sake of crowd pleasing."

He goes on to propose a film about an outlandish string of events happening to an African-American boy in the US, and says, "Even though each of these incidents have actually happened in the United States of America, I would be accused of spinning a fantastic yarn that has no grounding in reality, that has no connection to the 'American experience' and my motivations would be questioned, no matter how cinematically spectacular I made my movie. At the very least, I wouldn't be on 94 percent on Tomatometer and a strong Oscar favourite."

He's right. Say an Indian director travelled to New Orleans for a few months to film a movie about Jamal Martin, an impoverished African American who lost his home in Hurricane Katrina, who once had a promising basketball career, but who -- following a drive-by shooting -- now walks with a permanent limp, whose father is in jail for selling drugs, whose mother is addicted to crack cocaine, whose younger sister was killed by gang-violence, whose brother was arrested by corrupt cops, whose first born child has sickle cell anaemia, and so on. The movie would be widely panned and laughed out of theatres.

That, to me, is Slumdog Millionaire: contrived, pretentious, absurd, hollow, inauthentic, a pseudo-statement about social justice. And yet today the film stands on the precipice of Hollywood's highest honour, the Academy Award for Best Picture.

For me, the only authentic aspects of the film were the Hindi-driven dialogue and the acting of the slum children, which worked to make the entire slick package palatable.

As for the much ballyhooed end-credit Bollywood number, I left before they finished dancing.

I had seen enough.