The $15 million Slumdog, shot mostly in Mumbai [Images], slew the $150 million hit The Curious Case of Benjamin Button starring Brad Pitt [Images] in the race for the best picture (drama) trophy. This was the 66th edition of the Globes given by the Hollywood Foreign Press Association.

The best picture winner was announced by Tom Cruise [Images] in the presence of such Hollywood heavyweights as the Oscar winners Steven Spielberg [Images] (who received earlier a life achievement award), Martin Scorsese [Images] and Clint Eastwood [Images]. The glamour quotient came from the stars including Brad Pitt, Leonardo DiCaprio and Kate Winslet [Images] (winner of two Globes for The Reader, in the supporting actress and Revolutionary Road [Images], in the lead category) whose films were nominated.

"Golden Globes, or the GGs as we very affectionately refer to them -- your mad, pulsating affection for our film,' Boyle said, 'is much appreciated. Really, deeply appreciated."

The Oscar nominations will come on January 22. In addition to being nominated in the best picture, director, adapted screenplay and music categories, it is also expected to be nominated for cinematography, editing and costumes. 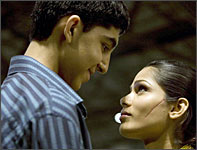 "We had no idea, no hope, no expectations that our film will be so well received in America," Boyle told Rediff India Abroad recently. "We thought given the British interest in India and the large Indian population in the United Kingdom that its primary audiences would be there."

At the Golden Globes, Boyle also cited casting director Loveleen Tandan who gets co-director credit in the film.

"Her contribution to the film has been immense," he said. "She was our touch stone. We consulted her on every detail in the film."

The awards  televised by NBC, and which were expected to be watched by at least 20 million in America and a far larger audience abroad, pushed India in focus repeatedly. Rahman, for instance, after thanking God for bringing him to Hollywood, also dedicated it to one billion people in India. And Freida Pinto, who introduced clips from the film along with Shah Rukh Khan [Images] (who was introduced to the audience as the king of Bollywood), said the film was 'a tremendous prize for our country.'

"It is difficult for me to think of many films that has challenged me as much as this film," Rahman said before his win. "Danny (Boyle) encouraged me to experiment. He did not want heavy Indian music but everything else was welcome."

The movie's much discussed finale involves the rousing song Jai Ho sung (mainly) by Sukhvinder Singh. "We wanted an upbeat song with full of energy as many cruel things happen in the film," Rahman continued. "In the end, good triumphs over evil in the film. But we had no idea how Danny would use it and the way it has been shot is amazing. I have heard no one leave the theatre before the song ends."

The film, which is in its ninth week in North America, was No 11 on this week's box-office chart, grossing an impressive $3.7 million, and taking its total to $34 million. It has become the highest grossing film for veteran actor Anil Kapoor (who was at the awards gala along with Dev Patel, who plays the title role) and composer Rahman. Even if it were not to get a single Oscar nomination, it could end its run with at least $45 million in North America. It is slowly starting its run in foreign territories; in Italy [Images], it has grossed a decent $3 million and is expected to run for several weeks, if major Oscar nominations greet it.

The producer of the film, Christian Colson, said after accepting the award that the entire team involved in the film is waiting for its Mumbai premiere. People in India, particularly in Mumbai were watching the Golden Globes, he said, and those associated with the film would be partying. But the real party starts when the film opens there, he added.

The first of the four Golden Globes went to Simon Beaufoy who adapted Vikas Swarup's novel Q and A, adding, among other things, a love angle to the story. He acknowledged the novelist at the event calling the novel 'amazing'.

'We really weren't expecting to be here in America at all at one time,' Beaufoy said at the event, 'so it's just amazing to be here.' He was referring to the film being orphaned just a few months ago when Warner Independent Pictures which was to release it was folded into the parent company, and Warner Bros. was not keen on releasing the film, at least this year. Fox Searchlight stepped in and committed itself to promoting the film to the hilt.

Fox Searchlight, which also picked up another film shunned by others, The Wrestler, saw it winning two globes -- for actor Mickey Rourke [Images] who plays a fallen wrestler trying to rehabilitate himself and Bruce Springsteen for the best composition of the year.

Slumdog Millionaire [Images], an unexpected hit, is on the best film of the year list of many leading critics including Kenneth Turan of Los Angeles Times. It has also been nominated for many heavyweight awards including one from Directors Guild Of America.

A few days ago it was a big winner at the Broadcast Film Critics Association's 14th annual Critics Choice Awards, winning best film, best director, best writer and best composer award. It also brought the best young actor/actress for Dev Patel [Images]. The BFCA is the largest film critics' organisation, with more than 200 members in the US and Canada [Images] who work in television, radio and the Internet.

The movie which received its first major recognition at the Toronto International Film Festival in September where it was declared the audience favorite movie is playing in just about 610 theatres in North America but it is performing far better than the critically acclaimed Milk, toplining Sean Penn [Images], and Doubt, with Meryl Streep [Images]. Each of these films are showing in more than 1200 theatres.