As much as the Oscar voters loved Slumdog Millionaire [Images], the film could not have won eight Oscars including the best picture and best director nods had it not been a consistent box-office performer, Hollywood insiders say.

While the media ran a number of stories about the backlash at the film in India and a section of the British press, the audiences saw it as anything but an uplifting film filled with a beautiful romantic story. The Oscar voters just could not overlook a film that had stayed among the top 10 films of the week for more than six weeks in a row, experts said.

There was also no shortage of Indians abroad, notably best-selling novelist Chitra Banerjee Divakaruni, who defended the film and argued that filmmakers had the liberty to go to India and make a film on a subject that some Indians think should not be discussed in the West.

'Success spawns uproar. Great success spawns great uproar. This has certainly been the case with the film Slumdog Millionaire,' she wrote in an op-ed piece in the Los Angeles Times. 'It may or may not win the Oscar for best picture, but it's already carried away the prize as the most hotly debated film of the season.'

Divakaruni, whose own novels including The Mistress of the Spices have upset some Indians who say that she should not wash the Indian community's dirty linen in public, is also a board member of Pratham, which does exemplary work with destitute children in India.

She argued in her piece that the stories of child exploitation in the film are far from being unrealistic. 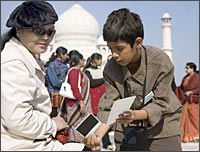 'Those who claim that Slumdog is filled with exaggerations and cliches need to remember that this is fiction,' Divakaruni, who has also been teaching literature at some of America's major universities, argued. 'In documentaries, exact representation, uncolored by personal beliefs, might be the goal; in feature films (and fiction and painting), it isn't necessarily so. When one accuses Slumdog of exaggerations and caricatures, it is similar to accusing Van Gogh of distorting his sunflowers or M F Husain [Images], one of India's foremost living artists, of not getting his horses' colors right.

In Slumdog, Boyle is following the convention of the picaresque, a genre that depicts with energetic abandon the many misadventures of a hero, usually of low social class, who ultimately triumphs over a corrupt society by using his wits.'

It is not a small story that Slumdog survived the backlash and prospered, mused Kenneth Turan in the Los Angeles Times. The critic was one of the many American writers who espoused the film from the very start when it was shown at a number of film festivals in September. Roger Ebert of the Chicago Sun-Times was another.

'As a result, where ordinarily I would have felt nothing but joy at Slumdog's multiple victories, an underdog-makes-good tale every bit as improbable as the one told on screen, I found myself feeling simply relief that the film had survived the gantlet of 24/7 media attention without self-destructing or worse. This is the tail wagging the dog in a really unfortunate way.'