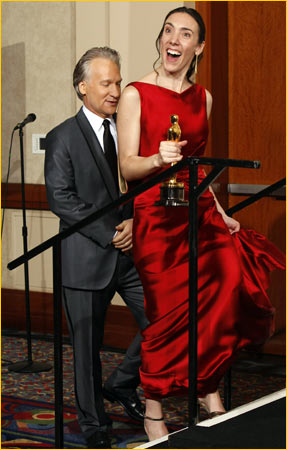 Smile Pinki: A real world fairly tale, which celebrates the work of the plastic surgeon Subodh Kumar Singh in providing free surgery to fix the cleft lip of poor young children, won the Oscar in the best documentary (short) category on Sunday night.

The 39-mintue long film shot entirely in Varanasi and villages of Uttar Pradesh [Images], focuses on Pinki Kumari whose life is transformed by the simple surgery.

The documentary was made by distinguished film-maker Meg Mlyan, best known for her feature length documentary Lost Boys of Sudan which was shown in some 70 cities in North America.

"But this film is a shorter work and to have it shown in theatres will not be easy," said Mlyan. "But if it were to win an Oscar and other awards, we may get opportunities to show it on TV across the world, including India."

She also plans to show the film at community organisations in many countries including India where it could be broadcast at the end of the year.

Receiving the award, Mlyan said the happy ending the film, the magic cure, happens every day across the world thanks to The Smile Train. The American organisation which backs the work of Dr Singh also helps thousands of cleft surgeries conducted free in more than 70 countries.

In the picture: Megan Mylan arrives in the photo room with presenter Bill Maher.