's very own boy wonder is here, and he's here to stay! Hari Puttar is an exuberant, hilarious film, directed by Lucky Kohli. Though the similarity from Hollywood's blockbuster Home Alone is impossible to miss, you'll probably forgive the makers in favour of the constant laughs the film provides.

Hari Puttar, played by Zain Khan, is a 10-year old boy, who has moved to with his family. When Hari's aunt, uncle and cousins suddenly descend upon his house all together, he is frustrated enough to make a small prayer wishing them all away.

Imagine his surprise when, the next day, his wish seems to have come true. Of course, the rational explanation is that the whole family went off on an excursion and in the hustle bustle, forgot Hari and Tuk Tuk (played by Swini Khara) behind.

Now, Hari and Tuk Tuk are in the possession of a computer chip, containing valuable information, which a bunch of villains are after. Finding themselves home alone and free to do whatever their hearts desire is exciting at first. Until the baddies arrive, complete in black leather, hideous greasy wigs and goatee (played by Saurabh Shukla and Vijay Raaz). 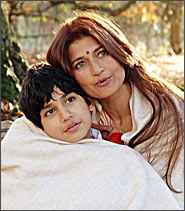 Despite the bad wardrobe and obvious hamming, the goons offer more than a few laughs. Their slapstick comedy will surely be a hit with children.

Their boss Kali Mirchi is a disappointment, though, with his blue eyes and painful rendition of Ajit. The goons, in their attempt to outsmart a duo of kids, bluster their way through the house, tripping over ropes, sliding over marbles, getting their feet stuck in cow dung... you get the drift.

Meanwhile, Hari's mother (played by Sarika [Images]) is moving heaven and earth to get back to her little boy, and facing adventures of her own, among which battling her way through the bad rendition of Ajit is not the least. Lillette Dubey and Jackie Shroff [Images], who play Hari's aunt and uncle, are completely wasted in the film -- their roles offer no scope for performance.

The music, provided by Aadesh Shrivastava, is foot-tapping and catchy.

Despite a few let-downs, the film is engaging and funny, keeping the children at the theatre in splits at the bumbling goondas. Do take your kids for the fun ride!