Singh was not really the Kinng when it came to competing with Slumdog Millionaire, the underdog saga shot entirely in Mumbai, which won the People's Choice Award at the end of the 33rd Toronto International Film Festival (TIFF) last weekend. Akshay Kumar's [Images] film was one of the 250 feature films from more than 60 countries, eligible for the award.

A gritty, upbeat and heart-tugging film, Slumdog has already started an Oscar buzz. The People's Choice Award is often an indicator of future Academy Award nominations; the past selections include Life Is Beautiful, Hotel Rwanda, Eastern Promises, Diva and Whale Rider and best-picture winners Chariots of Fire, and American Beauty. Tsotsi, which won the best foreign language film Oscar in 2006, was also a People's Choice Winner here.

Slumdog, which opens on November 28 in North America, is a strong contender for Oscar nominations, according to Chicago Sun-Times' Roger Ebert, one of the most read and influential critics in America. He wrote: 'The award has become an almost certain predictor of box office, critical and even Academy Award success.'

Slumdog, which had the audiences dancing in the aisles during the finale song and dance number (tuned by A R Rahman), breezed past through heavyweight films like Burn After Reading from Coen Brothers (No Country For Old Men), and Rachel Getting Married from Jonathan Demme (The Silence of the Lambs, Philadelphia).

Another high profile film Disgrace -- based on the Nobel prize-winning author J M Coetzee's novel about a South African professor (played by John Malkovich), who has a tempestuous affair with a student -- received an award from the international film critics but did not make into the top contenders for the award. 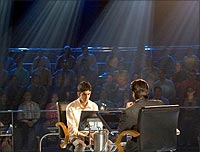 Slumdog was one of the surprise hits at TIFF. It has been directed by Danny Boyle and features Anil Kapoor [Images] as the egoistical quizshow host, and Freida Pinto and Dev Patel as young people from the slums triumphing against great odds. The title of the film, inspired by V K Swarup's novel Q and A, refers to the former slum resident (Dev Patel) whose resourcefulness, streetsmartness and fabulous imagination takes him right to the top of the quiz show only to raise doubts about his authenticity.

"Seeing the reaction of the people in Toronto, which many people believe to be the most film loving city anywhere in the world, I am hoping my film will connect with the audiences everywhere," said Boyle (Trainspotting, 28 Days Later). "I also hope it will be a hit in India for I simply love India. Despite all the contradictions India has, I find the country irresistible. The film is a tribute to an India I have been discovering in the last two years." 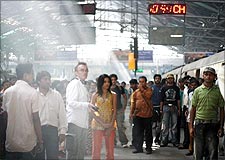 Freida Pinto, who is also visiting her family in Toronto, said being a Mumbai girl she understood exactly what was happening in the film. "But whoever thought the film would get such an ovation in Toronto," she said. The film drew at the public screening audiences from various backgrounds including, of course, the South Asians.

The first runner-up for the People's Choice Award, festival authorities announced, was the American basketball documentary, More Than A Game, followed by The Stoning of Soraya M, an American film based on the real-life stoning of an Iranian woman on a phony adultery charge.

Freida accepted the award on behalf of Boyle. "It's my first premiere, my first time dealing with the press, and now it's my first award," she said.

TIFF is arguably the world's biggest public film festival, which drew, according the co-director of the festival Piers Handling more than 300,000 filmgoers to the theatres, apart from over 300 film critics and filmmakers from Hollywood and over 50 countries.